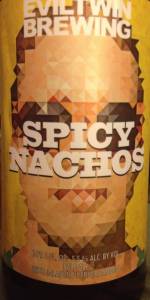 A: The beer is very hazy golden yellow in color. It poured with a massive four finger high bright white head that took a long time to die down, leaving a pillow of bubbles in the center of the glass, a collar around the edge and lots of lacing down the sides.
S: Light to moderate aromas of corn tortillas are present in the nose with notes of fresh jalapeños.
T: The taste is similar to the smell, except that the flavors of jalapeño peppers are a little stronger and impart notes of a spicy kick towards the finish.
M: It feels medium-bodied on the palate and has a moderate amount of carbonation.
O: This beer is exactly as advertised and definitely tastes like spicy nachos. Unlike other beers that use peppers, you don't get all spices and can actually taste flavors of corn.

Got this for free from my shop. The bottles got recalled over "exploding" but I've been assured this one will be safe; thanks to Ty over at craft. No freshness or bottle date, bomber to a pint glass

Pours a very cloudy golden yellow, 0% transparency. A finger and a half of foam is retaining pretty well at one, okay lacing. No explosion!

Smells of spicy jalapenos, tropical hops- pineapple, mango, lemon lime. Sweet malty base on the finish along with just a touch of alcohol. Peppers are definitely dominant here, I like how they blend with the fruity hops

Taste is pretty with the nose, jalapenos up front, fruit unfortunately isn't as strong, in fact pretty hard to pick out. Malty base again on the finish, a little bit of sweetness being drown by the spice. Again, super dominant peppers

Feel is moderatly spicy, a bit of a thicker body than I'm used to for an apa. Ten minutes after my first sips and I can feel it in my chest. Drink-ability is a bit low, this stuff is interesting but overwhelming

Overall one of the more spicy pepper beers I've had. It's not bad, but I don't know if I'll be able to finish a bomber of it. Pairing it next with some potato soup, might help it go down easier. Really hope it doesn't feel like I had VD next time I urinate

But in its portrayal of the appetizer-disguised entree, the beer casts a golden tortilla color, but cast with a mild flour haze. Its head formation is strikingly bold, having to overcome the pepper oils to achieve such substrate. Lacing with broken rings, the beer carries a very appetizing appearance.

Its aromatic character is highly spicy, sharp and heated. The scent of "hot sauce" rises above any character of Pale Ale. Its short caramel, crusted bread and toasted grain character sits right behind the pepper but offers only tepid support. Any hop contributions come across as ginger and earth as little comes close to rivaling the jalapeno-filled nose.

Its taste is malty-sweet early but soon turns to dry grain before the pepper flavor sets in. That's when the beer begins to favor dry heat to the caramel and honey underneath. The trigger of spice rises in the middle and, at first takes the shape of ginger, but then white pepper, before growing into a strong vegetal heat and fruity spice taste. Finishing with jalapeno heat, but also its flesh and pulp, the beer is dry and challenging to the taste.

Mid-light in body, it becomes quickly evident that the beer's capsaicin heat is just the start of its story. Its sheer lightness allows the jalapeno taste to stand out in spicy fashion. Coupled with spicy hop bitterness, the beer is heightened with heat. The spring of carbonation only exacerbates the heat as the overall mouthfeel is lively with flavor, heat and bite.

Spicy Nachos is a very inquisitive taste that makes me want to find things such as peppers, corn chips, salsa and cheese- but in the end, the Pale Ale's dry caramel taste and spicy hop character provide a firm base taste, and as the pepper and pulp swirl slightly above.

A: A moderately hazy, dark golden beer with a long lasting off-white head. There head is made of fairly compact bubbles.

No indication on the bottle as to when it was brewed, which is nice when you want to know if there are any hops left in your IPA and pale ale.

S: A pretty unusual but pleasent smelling beer with a medium-strong jalapeno aroma over a medium citrus hops aroma. There is a fairly strong herbal and slightly grassy aroma to the beer.

T: A strong pepper spice and a medium-strong hops bitterness dominate with citrus hops flavors supporting. There isn't much in the way of malt flavor or sweetness making for a spicy and bitter balance. The aftertaste is of hops bitterness and a lingering pepper heat.

O: An ambitious beer that isn't all that balanced but that seems to be the point. Chile heat dominates with some citrus hops.

I rated this Overall to other chilli beers so the 4.75 is against Ghost Faced Killa, etc. (I'll figure out the scaling later!)

Went to go check out Salud in NODA, Charlotte NC and they had 2 evil twins on and some other fantastic beers. Go check that place out !

Appearance - As noted by other reviewers, big head and a very appealing light orange.. dark yellow? sort of colour.

Smell - Picked up the jalapeno peppers more than the corn in this beer, really complimented the light hops of a pale ale. Make me a jalapeno beer candle.

Taste - Responsible use of jalapenos not watered down for those who are deterred by spice. I didn't find it too spicy but my palate is ruined by years of jalfrezi/vindaloo abuse. Got a wonderful jalapeno pop as I drank it which was perfectly mellowed out by the corn (concentrate/powder?). It's spicy nachos: jalapeno flavor for the spice and the nacho comes from the corn!

Mouthfeel - For a pale ale it was a bit heavier but it should be as the brewer is trying to bring the spicy nacho experience. Certainly added to the beer as opposed to taking away.

Overall - I could drink this beer indefinitely, I just wish I had a jalfrezi to go with this beer to take the flavours of the food and the beer over the top. If I had another one of these in my lifetime I would consider myself fortunate.

Agressive on the chili pepper for sure. Nice balanced pale ale riding underneath. Peppers tasting fresh, and vibrantly flavorful. A touch of chili heat, but no more then a tingle on the lips and some warming in the throat and back of the mouth. I love the style when done right, which is not always easy. Well rounded and smooth in the finish. Nicely done.

They have hit the right note here. If you enjoy a well crafted chili beer, this one is a must try

O - Nice freshness, heat, and drinkability for a chili beer.

P - This beer is built for burritos.

The beer comes in a hazy bright yellow color with a rocky one finger head.

The aroma is fantastic with hints of citrus and hops, but mostly tons of freshly cut jalapeno peppers. It tickles the nose and has just tons of that "green" pepper spice.

The flavor follows with some tropical fruit and citrus notes, a light bready malt, and then just tons of spice on the back end. It leaves a really good amount of peppery spice on the finish with some bittering to clean it up.

The amount of spice in this beer is perfect along with that gentle bready malt. I definitely prefer this over Habanero Sculpin. As someone who loves spicy beers, this is easily one of my favorites.

on tap at beer study in chapel hill. into a tulip.

pours a hazy yellow with an inch thick head with great lacing. the smell is huge on jalapenos, just massive. the taste is also BIG on jalapenos, massive. very hot, but not in the ghost face category. hops are there as well. medium bodied, mild carbonation.

overall very spicy but its good and doesn't linger too long. recommended if you're a fan of spicy beers.

Spicy Nachos from Evil Twin Brewing
Beer rating: 85 out of 100 with 70 ratings