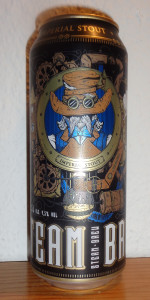 Notes:
View: Beers
Reviews: 15 | Ratings: 35 | Log in to view all ratings and sort
Reviews by BobbyOlson:

Can. Roasted malts. Dry. Caramel, chocolate, molasses, dark dried fruits. A bit too much carbonation. Medium bodied. Decent stout for the price. Nothing crazy though.

Half litre can poured into pint shaker.

S: Coffee with a hint of malt.

O: Missing the complexity of genuine Craft offerings but a decent budget beer from Lidl.

After having many different Irish and American stouts, let’s see what Germany has to offer.

Top: 2” of tan head, slowly recessing. So far so good.

Smell: after decanting, malty, hints of white bread, very little rye and raisins in the background. Not unpleasant, but I expected better, not stout-like at all. Although it shouldn’t be an excuse, but it’s cheap as chips (1€ for 500ml in Hungary).

Taste: meh. Feels like alcohol has been added after brewing, still, doesn’t feel strong enough for an imperial. The body is medium at best, and the taste has something weird, reminding me of Muscateller wine. And water...

Summary: for this price, it’s okay(ish) for one, only if you’ve never had a real stout before. Although I struggled to finish it... It lacks the character and marks of a stout, nevermind an imperial. And it lacks the body too. I wouldn’t say it’s disgusting, but I’d rather have a Bud or any similar lager (which-bear in mind- isn’t my favorite beer type), that says it all.

It’s beyond me, how this has “very good” rating. Mediocre is the word what would be more accurate, but it doesn’t even reach that level. Seriously, don’t be so generous when reviewing.

Pours a black color with a large foam head. The head soon dissipates and yields some lacing.

The nose has some complexity to it. Sweet notes of chocolate cake, honey, dark caramel and toffee, vanilla and a touch of dark fruit. The malts smell more toasty than roasty.

Sweet tasting overall, with notes of chocolate, toffee and dark fruit. These flavors are somewhat balanced by a light bitterness along with earthy hops notes of wood and bark. I feel like it could have used more roasted malt flavors.

Medium bodied and not as full as other imperial stouts, in fact, the body felt a bit thin. Smooth and creamy, yet not as mouth coating as other better examples of the style. The finish is sweet and doesn’t have much of that roasty bitterness I enjoy in other examples. The carbonation starts of ok, however, it soon dies down, redolent of flat cola.

My 2nd review from this brewery, I felt their DIPA was a miss, while this one was only slightly better.

Smell: a sort of funky iron smell, also malt, and a hint of chocolate

Taste: weak chocolate, a hint of coffee, malt, some of that iron funkiness

Feel: too much carbonation for a stout

Honestly not that good, stick to their IPA it is much better

This "beer" tasted similar to the German Red Ale of theirs.... only WORSE. Especially the after taste. Can't remember last time I drain poured, but that's what I did to the rest of this can, and the other one. Awful...

Imperial WHAT? The only thing stout about this beer..?? is the balls of the distributer calling it a AIS. It has the look...it has an artificial aroma and taste and pretty much sucks as bad as the DIPA from this "brewery". Nuff said.

Poured from a 0.5 L can into a Dogfish Head tulip

O: A lightweight as far as Imperial Stout's go. Great looking beer... so-so on the flavor. Not one I'd revisit. Good for the price I guess?

A: The beer is jet black in color. It poured with a half finger high off white head that settled down, leaving a thin layer of
S: Moderate aromas of dark malts are present in the nose along with hints of fruity yeast.
T: The taste follows the smell and has flavors of dark malts along with notes of fruity yeast.
M: It feels medium-bodied on the palate and has a moderate to high amount of carbonation.
O: This stout is a little fruitier compared to its American counterparts, although it is interesting to see this style made by a German brewery.