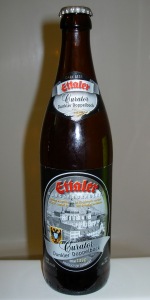 From one of the last authentic German monastic breweries Klosterbrauerei Ettal, Bavaria comes its famous Doppelbock Curator. As over the past years many of the classic bottom-fermenting Doppelbocks have been "adjusted" to make them "easier to drink", we have begged the monastery to re-brew for our U.S. customers its authentic recipe which was created in the years after 1330 when the monastery was established.

While its "everyday home version" is about 7% ABV, its historic brew goes back up to over 9%!

Reviewed by beeragent from Texas

4.19/5  rDev +6.9%
look: 4 | smell: 4.25 | taste: 4.25 | feel: 3.75 | overall: 4.25
Pours a deep mahogany, forming a half inch off-white head, with light spots of lace. The aroma is of rich caramel and dark bread. No hop aroma. The taste follows the nose, consisting on a complex caramel/dark bread combination, with enough bitterness to keep it from being cloyingly sweet. The mouthfeel is thinner than expected, partially from a lower carbonation level. Overall this is a great example of a doppelbock! Full flavor, but still retaining that lager crispness. And the high 9% abv is very well hidden!
Oct 06, 2022
Rated: 4.12 by SViterileroux74 from Texas

Poured into a tulip glass, dark clear brown color with decent initial head and lacing. Subdued earthy roasted malt smell and taste. Some sweet caramel notes, rustic and slightly metallic. A bit thinner than expected. Wondering if I got an old bottle.

taste is a follow up of the nose, a very fruited sweet caramel malt

4.05/5  rDev +3.3%
look: 3.75 | smell: 4.25 | taste: 4 | feel: 4 | overall: 4
500ml bottle. Lot number '14.08.20B014'.
Amber brown colored body with floating particulates throughout. Brief off white head. Very little lacing.
Aroma has roasted malts but lots of peach, date, and fig, which make it sweet.
Taste is fruity - fig, date, and peach. Has a big expression of highly toasted malts, close to caramel. Sweet and malty. The aftertaste continues and fades.
Medium mouth feel. No alcohol expression - for the higher ABV%. Okay carbonation.
In the end this is fruity and sweet, but with a bready nature. Expresses as an experienced and accomplished brew. The yeast must be a big part of the fruity flavor.

A - Pours a almost clear brownish amber, but in the glass it is dark brown with some reddish highlights. Half a finger rocky tan head that dissipates quickly to almost nothing (-). Some legging but not necessarily representative of what a typical high ABV beer might have (-). 3.75

T - Malty goodness. Brown bread or even raisin bread soaked in alcohol. The ABV is evident but balances nicely with the other flavors. No discernable hoppiness. 4.0

MF - Medium heavy body with a slight sweet finish. The ABV provides a bit of heat in the finish. 4.0

APPEARANCE: Deep dark ruby body. Has an appealing glow to it. Head is ~8-10 cm in my Paulaner stange. Head retention is excellent - ~8 minutes.

Seems sweet (in line with style conventions) and malty.

Aroma suggests a balanced albeit very filling brew that calls to mind beer in general's "meal in a glass" reputation.

Aromatic intensity is above average overall but probably below average for the doppelbock style specifically.

TASTE & TEXTURE: Fig rolls, baked bread, toasted malt, caramalt. It's actually more redolent of rich dark fruits than it is of breadiness, tipping it more towards something like a Belgian quadrupel in that respect than a bready German (doppel)bock. On the sweeter end for the style, which helps disguise its high ABV.

OVERALL: It's a drinkable and enjoyable doppelbock despite its 9% ABV, but its focus on dark fruit comes at the expense of the more traditional bready and malty flavours I look for in a top tier German doppelbock, and the dark fruits that are most dominant (fig, plum, grape) are less interesting than those that are subsidiary (prune, date). I have nothing against dark fruit flavours in a doppelbock - in fact, they're to be expected - but the main draw should be rich malty flavours, and they get eclipsed here.

4/5  rDev +2%
look: 4 | smell: 4 | taste: 4 | feel: 4 | overall: 4
Looks brown until you hold it up to the light and see that it is really a deep amber/ruby. The aroma is mild caramel and toffee. The flavor builds on that with dark caramel, toffee, raisins, dates, and hearty brown breads. There's a solid earthy/floral hop presence that keeps the sweetness in check and prevents any syrupy stickiness. A very food friendly doppelbock.
Apr 25, 2021
Rated: 3.99 by psweendogg from Connecticut

The beer is 44 degrees and served in a tulip glass. Not sure what makes this beer so special to be called the Curator. The pour created a light tan head with fair retention. The creamy head did not leave any lacing on the glass as it dissipated. I was disappointed not seeing a persistent head. The color of the beer is SRM 20, deep mahogany with ruby hues. The beer is clear as glass. Other than the head not lasting, it has a standard appearance for this style.

Initial aromas in the beer are caramel, chocolate, toffee, and raisin. Nosing further in the glass, I detect roasted malts, floral esters, a hint of Maillard, some smoke, bready, and a touch of solvent.

The flavors in the beer are caramel, bread, light Maillard, smoke, floral esters, raisins, caramel, light chocolate, a smidge of toffee, molasses, and a hint of solvents.

The mouthfeel of the beer is creamy and slightly warming.

The body of the beer is medium-plus, low carbonation, and a medium finish.

The alcohol is hidden in the beer. I get a little warmth in the mouthfeel but not the nine percent it is. The beer is wonderful. The Maillard in it is not overpowering and the subtle roasty notes are distracting. The body of the beer is a bit thicker than a porter. Awesome beer!

4.02/5  rDev +2.6%
look: 3.75 | smell: 4.25 | taste: 4 | feel: 3.75 | overall: 4
500mL undated bottle poured into a teku glass at fridge temp 9% ABV. The beer pours bright medium brown in color with ruby highlights and khaki head. The head recedes quickly to a medium sized ring of fluffy bubbles. Minimal lacing. The aroma is mild with sweet toasted bread, toffee, brown sugar, raisin and a hint of ethanol. The taste is semisweet burnt sugar caramel raisin toast with just a hint of earthy hop bitterness on the finish. The mouthfeel is medium plus bodied with less than medium carbonation and a somewhat dry finish. Not cloying, but getting as close as possible without crossing the line. Minimal alcohol taste or bite for 9%. Overall, very good to great. Almost like the German version of an English Barleywine.
Sep 21, 2020

While sturdy with malt the finish is rather dry. Certainly less sweet than a lot of big Bocks. Some tastes of raisins and plums without the sugary sweetness. There's a a plentiful dark bready taste like really dark pumpernickel. Overall this is much more interesting than so many sweet doppel brews. Bine & Vine has the 500 ml cans.

Aroma features a fresh brown bread crust crispness to start before quickly becoming overrun with dark fruit overtones; largely plummy, with accents of toffee; a vague cherry liqueur note along the middle; jammy Concord grape with a backing of demerara sugar coursing through the backdrop; hints of Merlot grape on the close.

Taste opens with earthier notes of crisp bread crusts and toasted caramel as a soft dark fruit rind acidity glides in the background; plum skins and pithy blackberry embrace an almost nutty tone on the back end, while a chocolate dusting fades into a semi-watery swallow.

Mouthfeel has a semi-crisp medium body sporting a progressive, subtle thinness across the palate and belying its higher ABV; a moderate-high carbonation enables a subtle, spongy/spritzy grit to guide easily along the mid-palate as a burgeoning stickiness peaks into the swallow steadily.

A uniquely fruity doppelbock, this one forgoes the typical malt/bready dominance in favor of a more prominent dark fruit saturation; the result isn't perfect, at times sacrificing its crisp, roasty edge, and yet remains solidly enjoyable due in large part to an effortlessly masked booziness.

Reviewed by Reidrover from Oregon

3.55/5  rDev -9.4%
look: 4 | smell: 4 | taste: 3.5 | feel: 3 | overall: 3.25
500ml brown bottle from Capital Market in Salem OR.
$4.49
Pours a clear bodies dark brown colour with a nice thick and frothy beige head.
Roasty /toasty malts..marbled rye bread comes to mind somehow..demerara sugar and spicy hops. Nice.
Taste similar but a bit sweeter..some brambles and figs going on in the sweetness. little too hot.
Mouth feel is weak to be honest..carbonation really low which lets the sweeetness become cloying and the alcohol show.
Started off good..but this is not a top class d-bock by any means

Reviewed by crenegar from New Jersey

4.4/5  rDev +12.2%
look: 4.5 | smell: 4.5 | taste: 4.5 | feel: 4 | overall: 4.25
Just finished up a 30L barrel of this here at the house, was wonderful. One of the keys to bringing out the full flavor of this beer is of course keeping it around 50 degrees, or at least not too cold . Super rich maltiness that wraps itself around your tongue without any roasted or chocolate character, straight up sweet viscous richness that's drinkable at he same time. East to get carried away with more than 3 or 4 while playing darts and listening to tunes. Certainly not as "gooey" as one might expect at 9%.
Mar 11, 2020
Rated: 4.01 by cozmo from New York

Reviewed by sokol_1993 from California

Caramel, cherry & raisins in the taste; a nice dessert vibe but too heavy to drink very much.

4/5  rDev +2%
look: 4 | smell: 4 | taste: 4 | feel: 4 | overall: 4
Snagged up a bottle for around 5 bucks into a pint glass
A - Not much in terms of presentation got a very deep dark ruby brown color but it poured with little to no foam that settles to just some mild bubbles on the rim.
S - Smells of dark fruit raisin sweetness with very mild bread and no ethanol smells which are always appreciated.
T - Biscuit caramel quite sweet with some apricot fruit and a touch of raisin. No sourdough aspect which is nice just a sweet and malty brew.
M - Semi dry but mostly sweet finish this beer despite the ABV drinks rather medium quite smooth.

Overall a very tasty surprised I never had any of their brews may have to seek out their other offerings!