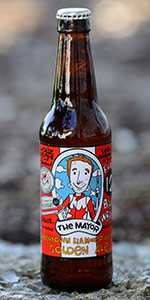 Notes: In tribute to one of the brightest racing talents out there, we created Hinchtown Hammer Down, a crisp and refreshing ale perfect for the month of May.
View: More Beers | Place Reviews
Recent ratings and reviews. | Log in to view more ratings + sorting options.
3.75 by freewill35 from Indiana on Jul 22, 2018

So this beer is totally different from the one in the picture. When they changed owner they changed the beer and kept the name. The new version is a pilsner and it's really good. Definitely doesn't deserve such a low score. Check out the new beer.
For a video review of the beer check out this video made by Russell and Richard

When scouring the shelves for a nice, refreshing beer, this is my go to choice in the Indianapolis area. It's a Pilsner they way they are suppose to taste. It's got some nice flavor profiles and a light mouthfeel. Never again will a Miller Light be in my fridge, this is my new everyday beer.

This is what I call the classic "hate to rate" kind of beer. Not because it's a bad beer . . . It isn't by any means. It's just that it's rather boring. Even the color itself screams mediocre. Maybe a bit under par if anything and bland. Still though it has some decent things going for it. The most being it would really hit the spot on a hot summer afternoon.

16 ounce can, no canning date that I could find. Served in a pint glass, the beer pours a mostly clear straw gold color with about an inch frothy white head. Head retention and lacing are both good. Not much to the aroma, the brew smells mostly like sweet and bready malt, along with some light grassy hops. Taste is pretty much the same as the aroma, but there's also a bit of citrus peel flavor noticeable. To me it mostly just reminds me of a macro lager (but a little better). Mouthfeel/body is light, it's a crisp, easy drinking brew that's well carbonated. This would probably be good on a hotter day, but unfortunately it's not so good on a 10 degree January day. I'm a fan of Flat 12's other brews, but this one just doesn't do anything for me. If you can find a single it's worth trying, but at $9.99 a 4-pack I'd pass on this.

Taste is toasty and crisp -- both light and very approachable. Beyond the "Summery" lager vibe, there's a definite presence of a citrus/lemon zestiness, adding a welcomed hoppy tone. Delicious, and well-done.

Growler was purchased at Flat 12 on 6/21/13, and later enjoyed in the comfort of my home 2.5 hours away. Pilseners are not generally a beer that I look for my drinking pleasure, but this one is pretty special for the style. The beer was a bright yellow color after being poured into the glass, giving a nice white head. The aroma was mostly grass and malt. By the nose, one could sense this would be a dry beer. On the initial taste, one get german malts, grass, and a level of dryness that makes you want to drink more. On a hot dry this could be an easy drinker. The beer finishes dry with a level of biscuit notes and a grassiness that lingers on the sides of the tongue. The light carbonation gives this beer some staying power, but is still appropriate for the style. Well done, Flat 12!