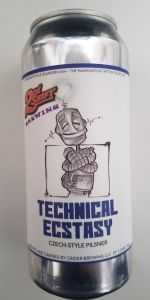 i always say its hard to get me excited about a pils. its an enjoyable style, but never quite dynamic and interesting enough for me to get all jacked up over it. this one is one of the very few worth an excitement level like that. its simple beer, thats for sure, possibly as simple in this case as one grain one hop, pils malt and saaz, although i could be mistaken there, it has a very elegant but familiar flavor profile, not way apart from a million others, it just seems dialed in to a rare degree, like its made by the master and all others are trying to get to where this one seems to effortlessly be. there is a round summery sweetness in the middle before the lager yeast dissolves it in a very fresh and upbeat finish, maze zesty and zippy by more hops than are usually found in an import, but not enough to be sloppy american style overdone. the balance is sensational, and the drinkability is unrivaled. still not a style of beer i often reach for, but if this was on shelves here in colorado, i would have it in my fridge all summer. maybe the best american made straight up pils i have ever had.

Poured into a pilsner glass. Pours a light to medium golden amber with a fine, one finger white head with great retention and lacing. Aroma of lightly grainy biscuit malt with a little fresh bread, hay and grassy hops, spot on pilsner. Flavor is also whole grain biscuit malt with an unusual fresh bread crust component, dried hay and grassy hops with that nice bready biscuit flavor lingering. Very nice creamy body, unexpected for this style. Well, this is a style that I just don't have much any more, tending towards IPAs, but this was one of three cans from 2nd shift that arrived (briefly) on the Seattle market, and I'm really glad I tried it. This has one of the best and flavorful pilsner malts I can remember and with the nice creamy body, this is very enjoyable. Not sure if this is the most authentic pils I've had, but definitely one of the ones I've enjoyed the most. Quite nice, I really like this.

On tap at Pilot Project (plant place) on a rainy evening in Chicago. Solid pilsner.

From a large can, this brew is a hazy gold color. Slim head and lots of haze . The aroma has a bit of sulfur, grain, and spicy hops. Grain and bread. Sweet, fresh baking bread taste. Light hop bitterness. Medium body. Okay,

Draft at Thou Mayest.
Pale saturated gold with a light chill haze. Ample foam that settles to a thin patchy skim and spotty lacing. Aroma is clean with a light dry pils malt cracker note and a vague noble hop presence as well.

The light hop note is more assertive in the taste, which is simple but very well balanced. Lightly grassy with a soft botanical note and a light biterness. Crisp clean yeast and a light crackery dry pils malt flavor. Very light and drinkable with a smooth texture and zero astringency. Nice stuff!

Gold in color with excellent clarity. There’s a fingernail of dishwater white on top. The aroma is of grassy German hops, well water, and light malt. The taste is spot on for a Czech pilsner. Grassy German hops and pale malt pair well. The mouth is light, crisp, and refreshing.

Poured out a clear, straw-yellow color with a two-finger head of bubbly foam. It smelled of grains and some sweet floral notes. Nice spiciness up front with some sweet caramel and bready malt.

Smell is clean and bready with plenty of floral hops, but not as overpowering as American pilsners can get.

Taste is nice and crisp, with a sweet and robust malt base. On top of that hovers a nice, balanced bitterness, and floral hops. But agan, it's more traditional than most Americans, and that's good!

Mouthfeel is thin to medium, slighlty creamy, and well carbonated.

A- Pours a very light golden to straw yellow in color with a medium haze in the body. A small to medium sized, very fluffy head forms and retains very well, leaving a good amount of lacing in the glass. Tons of carbonation is continuously rising in the glass from the first pour.

S- Light, grassy notes hit the nose first and dance delicately away. Just a touch of fruity, yeasty esters from the yeast strain are also on the nose. At the back end of the sniff there is just the slightest of hops bite to end the scent cleanly.

T- Starts off with with the same light and grassy flavors form the scent hitting the tongue. The hops bitterness that was faint in the scent is much more pronounced in the taste. The medium hops bitterness is slightly spicy and just a touch harbal and more pronounced than the in the European interpretations of the style. The back half of the drink is more musty and yeasty than the style usually is, leaving just a touch of banana flavor and funky flavors lingering on the tongue.

M- For a pils, this beer is very creamy and smooth. It drinks with a high level of carbonation and light weight, but the texture of the beer is among the smoothest I had had in a lighter bodied beer.

Overall, this is a very good, American interpretation of a classic European style. The only thing that is throwing this off from being dead-on to the style is the musty and funky components of this beer. To me, these components are very reminiscent of Second Shift's saisons and wilds. In the end, this beer is a little off style, but very good.