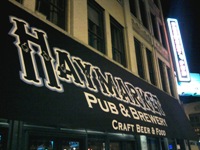 Went here last year for dinner and drinks while dropping my daughter off for college. Great atmosphere. Waiter was fantastic. Very knowledgeable about the beers and attentive. Food was decent, nothing spectacular, but we came for the beer selection. Next time in Chicago, I plan to go back

We went about 8:00 on a Friday night. This place is huge, with two separate bars. We walked to the back bar and managed to find two seats in the corner at the bar. They had about a dozen of their own beers on tap, as well as a can/bottle list. The bar also featured a full liquor bar. We went after dinner so didn't try any food. Bartender was attentive and took care of us, worth a visit.

Beers are solid, not spectacular. Great location in the west loop.

9/19/18: Stopped in at lunch time for a few pints. Nice bar and dining area, you can see the brewing vats sealed in glass behind the dining area. Didn't grab a bit but the few brews I had were solid. Not very crowded, service was great and had a good conversation with the bartender about craft beers and different breweries. Glad I had a chance to stop in, and will definitely return.

Standout urban Vibe in Chicago's hip restaurant Fulton district of converted warehouses looking east to the City's skyline. Outdoor tables, modest bar and sit-down area. Walked past the kitchen, tuns and other aluminum volumes to get to a large meeting room in back with another full-service bar. Totally cool.

It is too early for me to judge the Quality of the beer as I had only one. But beer geeks tell me it is among the most interesting -- and sometimes Top 5 best -- brewpubs in Chicagoland. I liked how they offer the classics in bottles/cans and then Haymarket's brews on tap; great diversity, nice that you are not captive when you walk into their brewhouse. While their website claims to have some of the best bar food, I didn't have the pizza; which is usually my test of such claims.

I must return for a flight and a pizza. I certainly won't wait another 8 years !

Monday 6pm. The place was packed so the bartenders really had no time to really offer much advice. Service was attentive and polite. Had a variety of house-made beers but nothing was really memorable. Long bar with plenty of seats and the room has a mix of high tops and tables. In this town there are so many good beer bars that I would not return here.

my first stop on my first chicago trip. Was thrown off a bit by the gun free signs on all the doors but this was an awesome little place with a great selection of brews. Spent grain pizzas were very interesting

Ate and drank here on 2017-06-06 in Chicago, IL near my office. Nice vibe outdoors. Food was a cut above for pub food. Broad beer selection with a couple of standouts. Knowledgeable waitstaff.

The waitstaff is hit or miss but managers are great and Crowley always seems to be hanging about somewhere! Food is amazing and so are the beers!

Nice place, large bar, open floor plan. There was plenty of available seating when I was there. They offer small and large pours of their brews. I sampled around 6 small pours. All the brews were good quality, described well on the menu, and fit the style. Service was friendly and attentive at the bar. A great place to grab a meal and some brews, enjoyable experience.

A great place to wile away an afternoon. An excellent selection of beers, good quality pub food and an extremely knowledgeable staff. What could go wrong?

The wife and I attempted to have brunch at Le Cheval in the busy restaurant row of Randolph Street, but the waits were insane. And seemingly every place we tried was either too busy or closed on Sundays. So we gave up on fine food and went the beer way at Haymarket.

I expected this place to be a mainstream beer joint for the masses but was surprised at all the quality brews they had: eleven taps, ranging from a pilsner to a barrel-aged barleywine, plus 10 guest taps.

I particularly enjoyed the Mathias DIPA and the Clare's barleywine aged in Woodford Reserve barrels.

Beers are served in 4-12-16-20-32-64 ounces (love the variety!). Service was really nice bartender the pimento cheese spread we had was top-notch. Will revisit, they are serious.