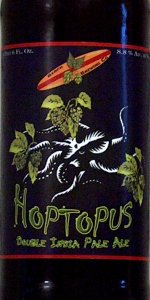 L: Had this beer on-tap at Growlers to Go - Short Pump, poured into a snifter glass. Had a golden yellow color and a mostly clear consistency. There was a half inch of creamy, somewhat long-lasting head. Above average lacing.

S: A good, but not spectacular, aroma of hops, malt, citrus fruit, and tropical fruit.

T: Tasted of a bit of citrus fruit (grapefruit), a surprising amount of malt (more than expected), lots of hops (the dominant force), and some tropical fruit (pineapple, in particular). A slightly out of balance flavor in some ways. It's a little overhopped, but there are definitely some good aspects here.

F: A well-carbonated beer with a slightly syrupy finish. Medium-bodied.

O: An uneven, but kind of interesting, beer. Worth a look.

Poured from a 16oz can into a speiglau IPA glass.

Look is a hazy yellow orange with a billowy white head.

Dank pineapple throughout the beer. Maybe a little astrigent.

Generous hop bite. Not a lot of complexity, but if you like a hop bomb, Hoptopus does the trick. There is nothing subtle about this double IPA. It packs a punch.

Pours a murky amber color. The head is a finger high and white in shade. Retention & duration are lacking, but the soft texture and sturdy lacing left on the glass give it brownie points.

Judging from the nose, this is a textbook west-coast DIPA. Notes of grapefruit rind pop massively, backed by some piny & grassy bitterness. Also sturdy is the malt backbone - thankfully devoid of clashing caramel or toffee, it offers additional sugar cookie and cracker qualities. This aroma proves that west coast IPAs can still excite.

Sadly, grapefruit notes are less dominant on the flavor profile. It opens up with a twinge of grapefruit peel, before working into a malty middle. The malt bill is what it should be for the style. A bit assertive, but hey it's almost 9%. And instead of offering overwhelming notes of caramel and toffee, it offers table sugar, cookie, and a touch of bread. It ends with a moderate piny bitterness, and a touch of booze. The latter detracts, but this is a good DIPA otherwise.

It has the classic feature so reminiscent of west-coast IPAs: it starts off a little sweet, but bitterness slowly but surely builds on the palate. Not to oppressive levels, but more than enough to cleanse the palate and invite additional sips. Carbonation is medium, slightly concealed by the medium-full body.

I dig it. I dig it more than expected, in fact. It's a fine example of a malt-driven DIPA, if a bit lacking in nuanced hop flavor. It was on the pricier side for a single can, but I'd drink it again no sweat.

L - Pours a lovely dark amber color with an off-white head. Decent lacing, even with swirling, and good retention.

S - Intense grapefruit rind dominates the nose. There is a smidgen of spice, and a healthy amount of piney resin, but this is definitely the nose of a west coast DIPA.

T - The taste surprisingly has some light floral notes that aren't obvious in the nose, but it is grape-fruit and resin dominated. The malt does provide a light, honey like sweetness that is quite nice.

F - Has a medium body and appropriate carbonation.

O - This is a very drinkable DIPA. An easy recommendation to West Coast IPA lovers in VA.

Notes: Hazy brass colored body beneath a creamy off-white head. Massive pineapple and tropical notes (melon, mango, grapefruit) with some pine. The flavor follows, tropical with some alcoholic strength over biscuity and bready malt. A bold bitterness balances it and it finishes mainly dry with a spritz of alcohol, pine, and tropical fruit as the residual malt fades.

This was poured into a tulip. The appearance was a slightly hazy burnt orange color with a one finger white foamy head that dissipated within about a minute, light speckled lacing stuck around the glass nicely. The smell started off with a big blast of grapefruit, orange peel and pine that led to a somewhat resinous behavior to the aroma. The taste took the citrus flavors to town and amplified the pine a bit. On the palate, this one sat about a medium on the body with a slick resinous aftertaste that led to the same kind of finish. Overall, this was a very good offering that I wouldn’t mind having again.

A- Pours a slightly hazy medium amber color with a 1/2 inch off-white head that retains well before becoming a thick ring around the edge of the glass and a mostly full sheet of surface foam. Resilient lacing leaves a solid ring behind.

S- Interesting aroma of sweet malt and earthy hops that, together, reminds me of ginger for some reason. Also a bit of honey.

T- More malt with some orange notes from the hops. Bitterness is pretty mild and there's an interesting sweet in the front, dry in the back duality. The alcohol is very well concealed and there's enough resinous pine character to keep things from getting boring.

M- Somewhat sharp from the hops with medium carbonation and a body leaning toward the fuller side.

O- Decent enough with no particular flaws, though those looking for any citrus will be sorely disappointed. This is definitely more malt driven which I happen to not mind from time to time.

A Hoptopus in a sea of IPA's.

Feint citrus smell. Far from the Juice Bombs I've been drinking of late

Creamy and well carbonated. Tingles the tongue and back of throat

A nice DIPA from the mid-Atlantic. Thanks Jason!

Pours a pale gold with firm head. Bread and caramel malt nose and a little hop presence. Instant Cheese funk taste yields to bready malt and piney hops. Maybe a little diacetyl. If the chemical composition was looked after a little more carefully this would be an outstanding beer; plenty of great traits and balance but slight infections.

From the growler, it pours a clear amber with a moderate head, last awhile. Lacing Hops evident in the nose. Hops definitely evident in the mouth. Enjoyable!

Nice head retention and a bit of lacing. Color is a bit on the amber side.

Nose is full of piney hop, malt definitely shows through.

Relatively well balanced hop and malt, bit heavier on the malt side than I like. Doubt this is from age since it's a relatively fresh can.

Nearly clear on the first pour, murky on the second, and golden orange in color with a 3 finger white head with thick, clingy lacing.

A great beer. Kick ass aroma and taste, and great body. A "go to" beer.

Thanks to @montman for this one.

So solid. Aroma is bursting with both hoppy citrus and malt backbone. Flavor comes through with more of the same. Really solid. Finishes with same flavors with a slight sticky resin. Love it.

Poured from a tallboy into a shaker pint, the beer is a slightly hazed, caramel coloring, with a steady flow of carbonation in the body, and a fluffy, light, big bubbled, off-white head. Aromas of dank hops resin, piney and sticky, with heavy vinous and vegetal, with a richly sweet bolt of tropical fruit notes, including pineapple, mango, and melon. Very well balanced nose. Flavors are heavily roasted and richly sweet forward, with a solid dose of rich caramel, followed immediately by pineapple and melon sweet notes, and all undercut by an extremely bitter, dry, and resinous hops character, with notes of cut grass, pine tassel, and pepper spice. This one has it all, kids, and keeps a pretty decent, harmonious balance, too. The body is full and smooth, but with enough levity from the carbonation to keep it extremely drinkable. The aftertaste is all hops, with a more herbal tone coming forward, including basil, pepper, and lemon grass. There is also, still, a heavy dose of the pine pitch, wet grass, and general hops stickiness still in the aftertaste, too. Smooth, dry, bitter finish, with a solid dank linger. Good beer.

Poured from a 16 OZ can into a pint glass.
Aroma- Has a nice hop smell with some citrus tossed in
Appearance- A murky copper color with a thick white head.
Taste- A nice hop flavor with some citrus and a little spice. real good
Palate- A medium bodied beer with moderate carbonation. Has a dry finish with a hop bite.
Overall- A surprisingly good American DIPA. I liked the color and flavor and the can is pretty cool to look at.

this beer needs some fresh ratings. new recipe, newly canned on 2/4/15. it was mediocre, but hopefully the change in profile will change the current desire and outlook!

N - nose is fairly similar, but has a sweeter, more distinct character. you can tell there are citra hops present now.

T - is this even the same beer? big bursts from the citra hops jump right out. almost a buttery character - this is all of a sudden a must-have local (read: 757/hampton roads) DIPA, and the only local one brewed often enough.

P - not flashy, nothing to dismiss. biting, stinging, no grapefruit though.

O - if you're in VB, you have to get some of this. this went from "meh" to very good overnight. as long as they can brew enough to keep this fresh, i'll be happy.

Appearance: The body is hazy with a medium shade of copper beneath a thick fluffy white head. Loads of visible carbonation.

Taste: There is a strong earthy and woody character to the beer. Tea-like with a bit of cedar and fairly strong mint at the end.

Mouthfeel: It has a very strong bitter backbone with a good dry finish.

Overall: It's a pretty good Double IPA that really seems to focus on herbal flavors rather than citrus. The can says "This west-coast style India Pale Ale boasts intense bitterness and grapefruit-like character throughout." They got the bitterness down, but they missed the mark on the grapefruit.

As an IPA fan this just became a front runner for me. It has a kick with near 9% alcohol so you don't do many of these at one sitting. Both hoppy and citrusy. For me I don't know how they would improve on this one. Loved it and will definitely have more.