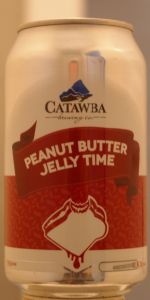 Notes: PBJ Time Ale is a "light brown" ale featuring subtle British hopping during the boil. This ale is aged on raspberries and real peanuts to give it layered bread, peanut, and jelly flavors. It is a PB&J in a glass!

Remember when your mom packed a PB&J sandwich in your lunchbox? The flavors all melded into pure comfort food by noon! Well, we recreated this childhood goodness in a beer! This light brown ale is brewed from five different grains and then aged for weeks on raspberries and roasted peanuts. Take a sip, let the flavors mingle on your palate, and enjoy our PB&J in a glass.

This is an excellent rendition of a PB&J sandwich. As stich it deserves a higher rating than I've given it. But should this be the goal of a craft beer? I found the balance to have to much peanut and not as much raspberry as I'd like. No complaints about the strong impression of baked bread.

Honestly didn't get much of a "jelly" taste to it but if you like peanut or peanut butter, you'll really enjoy this beer. Catawba Brewing does a great job with their beers and you can add this one to the list, well worth trying.

True to what it claims, I guess this is one of the few things within the realm of food that my palate thinks should stay as food.

This HAD to have come to me courtesy of local, in-person trader, @tone77 for The CANQuest (tm)! The fact that it is my extant picture suggests that it was from the era when pic approval took (ahem!) forever, causing it to get shunted to the side & forgotten. 8=( I am just happy to be drinking it tonight, following CANother raspberry-infused beer!

From the CAN: "Remember when your mom packed a PB&J sandwich in your lunchbox? The flavors all melded into pure comfort food by noon! Well, we recreated this childhood goodness in a beer! This light brown ale is brewed from five different grains and then aged for weeks on raspberries and roasted peanuts. Take a sip, let the flavors mingle on your palate, and enjoy our PB&J in a glass."

The Crack! revealed a brimful craft CAN that seemed as happy to see me as I was it, giving me a faint spritz across the fingertips as a gesture of its happiness. I was lenient with it, given its potential age, so when it failed to produce much head, I gave it a vigorous in-glass swirl. This raised a brief finger of peanut butter-tan head with modest retention, quickly fading back to wisps. Color was an oh-so-slightly-hazy Amber to Dep-Amber/Light-Copper (SRM = > 9, < 13). Nose was yet CANother amuse-bouche, making me smile in response to its peanut-raspberry smell. Mmm.

I liked smooth PB & my choice was strawberry jam or preserves, unless it was my paternal Grummy ChANdler's home-CANned red raspberry preserves. That, a wee carton of milk & a bag of Fritos & I was all set for the afternoon! Mmm.

Mouthfeel was thin-to-medium, no great shakes, but not watery, either. The taste was full-on raspberries & peanuts! No way did I get anything that suggested an ABA! This is why "Fruit & Field Beer" was added! 8=( ChANge request CANming!

In response, I poured a wee dram of Faber Liquor's Raspberry Vodka & opened my current bag of Fritos. Mmm. Better & better. I watch the PLCB website pretty cautiously since, given their state-run monopoly, we get some wild distro! Pop-up sales for Faber Liquors in Trumabauersville, PA happen pretty frequently & since a State Store is on N Queen St, diagonal to the bus station, it was nothing to run in, grab a bottle & catch the next bus. As such, and not (usually) being a liquor drinker, I have a nice on-hand supply. A friend is now their rep & even he was impressed by the depth & breadth of my inventory! With the exception of Chocolate Vodka 8=p I'd like to procure the rest of their line at some point.

Mmm, raspberries, peanuts & corn chips! + voddy. It's like my grown-up kiddie's dream. This was CANtastic & getting better with every sip. ABA?!? Hardly. Naught but raspberry & peanuts! Amuse-bouche? Full-on sourire! I was grinning like The Joker, Harley Quinn, the ex-Old Lady, Mike Lange's butcher's dog & Cindy, all rolled into one big grin! 8=)

Finish was in that Twilight Zone between semi-sweet & semi-dry. I will leave you to decide as I return to my Fritos, my vodka & my beer. Adios! YMMV.

When I was growing up, I always got hot lunch at school since I wasn't much of a sandwich person. Peanut butter and jelly just wasn't my thing but I could see why others liked it. Flash forward years later and of course, this comes out and I ended up obtaining a can via a trade. It was different than what I was accustomed to and to top it off, this was the first beer that I ever had from Catawba. I can see how the ratings on here had such a wide range and it almost seemed like a Fruit / Vegetable beer rather than an American Brown Ale but in the end, it was good to have something that stood out from the IPA's and heavier Stouts that I'm accustomed to rating on here!

Of course, the hue to this beer was a deep and radiant brown with lots of floaties and sediment in it. Not a big head and no lacing was to be seen after the first few sips of this, which would be on par with other examples of the style that I've had over the years. Lots of strawberry and grape jelly sweetness in the nose as the nuts didn't emerge until I took a few sips. Roasted, ruddy, and a bit grainy, the bread, caramel, and nuts didn't come through until this warmed up a bit. Thin, slick, and sugary, this could have had more of a nuttiness to it as that really emerged only in the aftertaste. This almost came across as "A tale of two beers" since the front and back halves were different from each other but somehow, this worked out in the end.

Not a lot of carbonation, malt, or booze in this as this seemed like a liquefied sandwich, more than anything else. Enough pecan and peanut shone through to take the edge off of the sugar but some bready malt would have sealed the deal for me. Worth a go once for the novelty factor even though this was more than a one-trick brew. Props to those who also enjoy the Family Guy reference!

Pours a murky brown with amber mixed in to give it a reddish hue. Head is non existent really fades so fat to a ring with very light lace.

Aroma is malty with hints of peanut butter and lighter raspberry fruity sweetness.

Taste is malty with definite peanuts present in the nuttiness usually found in browns. Some light fruitiness to add the jelly part. enough hops to keep it from being cloying to round it out.

Mouthfeel is light side of medium with pretty active carbonation.

Overall whelp not really a fan of peanut butter in beers but thought I would try this to see if my taste had changed any. Just not my thing but if you like beers that taste like PB&J in a beer it might be yours as many look forward to this one in these parts.

16oz can poured into a pint glass
A: Hazy brown with a one-finger head
S: Malty, definitely some peanut butter and raspberry (jelly?) notes
T: Malty, a bit sweet, raspberry, not much peanut
M: Medium-bodied, slightly sweet
O: Pairs fairly well with the sandwich but didn't do a lot for me on its own

Just sort of OK? I had a different peanut butter and jelly flavored beer a few years ago, and it was fantastic. You definitely tasted the jelly and the peanut. With this ale, the flavors are there but a bit weak for my liking.

Smells of raspberry jam and nutty roasted peanuts. Undertone notes of honey & bread crust. Tastes of jammy raspberries up front, followed by some brown malts that give notes of dark bread, caramel& earthy Malt. The finish brings out some roasted peanut flavor and longersnof raspberry. Medium body and carbonation, foamy mouthfeel and finish. Overall, both elements of peanut and raspberry are prevalent throughout, worth a try

Excited to try this brown ale but unfortunately it missed the mark for me. I was skeptical these notes would be able to be pulled off and found it to be a beer that was fairly off putting and hard to finish. The pour was an amber haze with minimal head. On the nose you immediately are hit with aromas of seemingly soiled wheat bread, chunky generic PB and jam. I would liken it to a PBJ that was left in your car middle of summer. The taste is highly carbonated yet thin with an overpowering bready, peanut flavor. The raspberry notes are there but there is no balance in flavor. The peanut and old bread notes just linger really killing this one. Not one i’ll be trying again. Novelty ale.

It is exactly what it says it is.

16 ounce can poured into tulip. No date on the can.
Pours a muddled looking brown with pinkish throughout. Small head of white. Hmmm...it smells like wheat bread, peanut butter and raspberry jelly. Raspberry dominates much of the taste and then peanuts swoop in. Not peanut buttery but still interesting. Mouthfeel is a bit too bubbly for me and thin. Overall, I’m enjoying this gimmick beer.

T: Peanut butter, strawberries& a little toastyness on the edges. A little grape & strawberry, a little nuttiness, once warm. Finishes a touch thin with some strawberry & not much else

MF: Body is light, carbonation restrained, but increased once warm

Lack of depth on the flavor makes it seem a bit fake, but not horrid, by any means