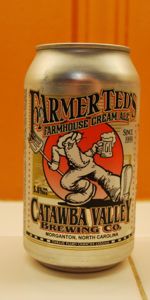 This beer is very smooth. Some cream ales are too sweet, this one is just right. It has a heavier taste than it's light golden color would suggest. It has no bitter qualities at all, and a fresh after taste. Good light beer, great dessert beer.

What a lovely oddball of a beer, brewed with “wheat, corn, American hops and free range yeast.” While none of those ingredients are necessarily new to the Cream Ale style, the addition of wheat in this case overpowers what’s typically a much cleaner style of beer. However, while it’s missing some expected larger-esque nuances it makes up for this with its uniqueness.

Nice to see Catawba Valley six packs over here in the Triad.Poured into a standard pint glass a clear lighter golden with a halfinger bone white head that was gone pretty quickly.Sweet notes in the nose,mainly corn and and cereal grains,not much hop presence.Somewhat sweet up front on the palate but it balances out somewhat with mild toastiness and faint grassy/herbal hops in the finish.Not bad for what it is,it's good for doing stuff around the house like today.

Sampling this can at cellar temp poured into a pint glass.
The beer pours a bright clear straw yellow color with creamy bleached white dense head foaming up with a gentle pour.
Aroma is grainy and slightly sugary sweet with some corn husk mixed in for good measure.
Fairly mild and clean nose.
First sip reveals a light crisp body and fine tingly carbonation. The beer is very easy to drink and goes down smooth on each sip.
The flavor is slightly sweet up front and again I get some husky grain notes, but the finish is dry and has some earthy hop notes.
This is a straightforward and simple beer, but has no flaws and is enjoyable for what it is. I wont go chasing it down, but would recommend on a hot day and am glad to have been able to try it thanks to the guys at Craftcans.com who sent me the package

The beer arrived on the counter in a plastic cup due to Bele Chere rules. The color was a clear pale straw with a white creamy head which lasted well to lace the glass.

The aroma was very light caramel malt with a low level of DMS and corn. Very appropriate for the style.

The flavor was slightly sweet when it first hit the palate with a low caramel malty impression and a slight corn DMS.

The finish was very slight sweetness with light corn flavor into the aftertastel. The body was medium light and well done. The carbonation made the mouthfeel creamy. A nice cream ale.

Pint at Barley's in Asheville, NC.

My local, in-person trader, tone77 was recently down to North Carolina and picked up several different CANs for me in support of The CANQuest (TM). My hesitancy was that at least a couple of them did not have associated pics and one hard-and-fast rule of The CANQuest (TM) states that "Thou shalt not Crackest open a CAN without an approved picture unless a truly compelling reason exists." The reason for this is that a picture of a Cracked CAN looks really cheap and low-down and the idea is to elevate the glory that is CANned beer. Also, and not to editorialize, but why has pic approval been taking so long of late? Onward!

From the CAN: I really dug the R. Crumb-like truckin' on farmer of the label! "Paying homage to the original settlers of Appalachia and brewed with natural ingredients such as wheat, corn, Ameri[CAN] hops and free range yeast. This crisp refreshing ale is the product of Catawba Valley's version of early Ameri[CAN] brewing."; "Farmer Ted's Cream Ale is an indigenous Ameri[CAN] beer style created as an answer to post-prohibition German lagers. We pay tribute to the beers made on early, rustic systems by using natural ingredients like corn and barley to create a smooth and full-bodied, straw-colored ale. Reward yourself with a Farmer Ted's after a long day plowing the fields, or just after mowing the lawn!"

I am glad that they justified the use of corn, which I have come to realize is El Diablo when it comes to adjuncts in beer. I have had so many silage-like AALs as part of The CANQuest (TM) that I CAN now readily identify it when it rears its ugly smell and taste. Again, stop with the editorializing. The Crack revealed yet another brimful craft CAN, which is like getting a baker's dozen. Previous reviewers mentioned the discernible lack of head, so I employed the inverted Glug for maximum head production. It was still to little avail as I had a brief finger of fizzy, bone-white head with extremely low retention. Bye! Color was lemon-yellow with NE-quality clarity and somewhere around Escondido, CA, Greg Koch was scoffing at me. Nose was an interesting melange of scents - light silage; I agree with Cresant on peaches; a peppery spiciness, perhaps from the yeast or the wheat or both. I still like Genny Cream, but it NEVER smelled as good as this! Mouthfeel was thin-to-medium and I did experience the silage-like flavor of the corn more strongly on the tongue, but I was still getting a fruity spiciness also. Finish was semi-dry, totally refreshing and more appropriate for a hot summer's day. BTW, what happened to Spring this year? It is downright chilly! Okay, no more editorializing for this review.

Appearance: It is a nice looker, at first, with the liquid pouring out clear and golden and a nice head forming; but the head fades way too quickly and leaves no lace

Taste: Sweet and sugary, with vanilla and corn syrup flavors dominating; grainy with oat and wheat flavors developing, to some extent

Mouthfeel: Well, what did I expect as it's a cream ale

Appearance: Slips from the can a reasonably clear, yellow-tinged body with, well, no real head formation despite some active effervescence.

Smell: A little bit sweet-scented on the nose with the expected corn-derived accents backed by a bit of malts and a faint, faint hint of fruitiness.

Taste: Sweetish in taste, with a flavor reminiscent of Corns Pops with a honeyed sweetness. Minimal citrus accent and a subdued hint of spice, with a low overall bitterness. Semi-dry, soft finish.

Overall: It's fine (for a cream ale)!

The beer was billed as a Farmhouse Ale at Asheville Barley's. Seemed fair for the style with a few American twists. Opened with a Wit-like color, but with less haze and more carbonated. Aromas of light malt / grain blend and a healthy dose of estery spices. Tastes of light malt take precedence over the grains, but contributing residual sweetness that lingered a little too long. Hops balance the malts while contributing backgraound spices and earthiness. Finishes a bit on the sweet / tart side. Body is quite light and refreshing. Low alcohols for flavor make it a real thirst quencer.

Came in a pint glass, straw colored, with a nice 1/4" head with good retention. Sticky lace lined the side of the glass. Smell was sweet, reminded me of candy corn. Taste was very heavy on the malts, sweet, and an ever so slight metallic aftertaste. Felt a bit thin in the mouth, but on par for the style. Great session beer.
Overall not really my style, but I would take this over a macro or your average lager anyday. My macro drinking buddy loved this beer. It was his favorite of all the beers he tried in Asheville and he tried a lot of beers.

Average brew. Pours a fairly clear straw yellow color from a 12 0z can into a pint glass. Small fizzy head fades out fast. There is little to no lacing on the glass. Aroma is very mild grassy hops and some bready malt and a little citrus (lemon). Taste is much the same but better than the aroma since it goes down so smooth. Mouthfeel is light and crisp like a lager. creamy and smooth. The overall taste is not all THAT MUCH better than a macro lager but the citrus and smooth mouthfeel make it a bit more interesting.

This beer would be a good crossover beer for a macro fan. The beer looked like a macro with a thin head. The taste was similar to a light beer. The mouthfeel was fairly smooth for the style. The drinkability was good. This beer could be sessioned with ease.

A-Slightly hazed golden straw-yellow with a medium white head that reduced to a thin cap and left decent lace.

S-Sweet biscuit, a touch of cornbread and a light touch of musty, earthy hops.

T-Sweet biscuit malt, a hint of light citrus and grainy cornbread in the end.

D-Solid macro-crossover brew. Enough flavour to hold my interest and light enough to be refreshing.

Served this 12 oz. can in a shaker pint. No date. The dull golden body supported a white head that quickly faded to nothing.

The mouthfeel was medium to full bodied. Dense and zippy in the mouth but a little slippery and smooth in the finish.

gets points for 'hidden' strength.. tastes like a 4.5 percenter at 6%. there's something not exactly right about the late aftertaste.. a bit too sugary corn for my liking. sweetbread meets lemon in the taste. The mouthfeel is pretty good and to style, especially given this is out of a can. Which makes this a great poolside/golf beer. But not sure I could go further than 2 or 3, so that goes against that a bit.

nice for being in a can craft, but Bombshell Blonde or Sally is much preferred. just a touch too sweet. a little more hop bitterness and this would be much better.

do love the mouthfeel though.

A: The beer is clear light yellow in color and has no visible carbonation. It poured with a thin white head that died down, leaving only a thin collar around the edge of the glass.
S: Light aromas of bready and grainy malts are present in the nose.
T: Like the smell, the taste has flavors of bready and grainy malts along with hints of floral hops. There is a very slight amount of bitterness.
M: It feels a bit shy of being medium-bodied on the palate and has a moderate amount of carbonation.
O: The beer is easy to drink but lacks the smoothness and creaminess exhibited by other beers in the style.

A: Pours a crystal clear light to medium yellow in color with moderate to heavy amounts of visible carbonation and hints of lemon + golden yellow highlights. The beer has a finger tall creamy white head that fairly quickly reduces to a couple of small patches of very thin film and a thin ring at the edges of the glass. Minimal amounts of lacing are observed.

T: Upfront there are light flavors of bready and grainy malts with hints of floral hops. Minimal amounts of bitterness which fades relatively quickly.

O: Easy to drink and enjoyable - this would pair well with just about any foods. Not as creamy as some of the others in the style but it is still a good selection.