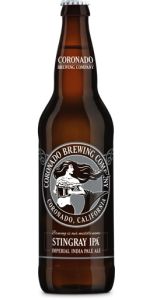 Notes: Named after a serene Coronado shoreline where locals soak up sun and suds. This easy-drinking IPA will transport you to a tropical paradise the moment it hits your lips. Citra, Mosaic, Simcoe and Souther Cross hops provide flavors and aromas of tropical fruits and sun-kissed citrus with soft accents of nectarine and peach.
View: More Beers | Place Reviews
Recent ratings and reviews. | Log in to view more ratings + sorting options.

Scrappy notes from 2017. Large bottle into pint glasses.
Slight smell of alcohol, clean tasting and easy to drink. Alcohol not in the flavor as much. Quite hoppy which is a surprise since it's only 48IBU but it's not too powerfully hopped, not too sweet and has a really nice malt/hop balance. The four varieties of hops make the beer excellent.

Pours a lightly hazed and burnished yellow gold. I get a dene double finger width of off white suds capping my glass for several minutes before sliiping down into some chunky lace.
The nose is super juicy! Leads with ripe melon, peach, mango, grapefruit, floral with some light pine. Very clean hop flavors overall with a juicy malt structure to provide just enough sugary backdrop for the hops to shine. Very nice fruit juice flavors of orange, melon, mango, grapefruit and some moderate spice and pine notes. Alcohol is incredibly well masked here. Quite resinous in the finish with moderate high bitterness. Has a real frothy feel.

Has a very pleasant tropical fruit and melon nose with a bunch of citrus. It is gold with a light haze under a modest cream colored cap with fair retention. the flavors mirror the aromas with the addition of stone fruit. the bitterness is moderate. the hop flavors are very well developed.

Lightly veiled orange, solid and long standing foam.
In the nose tropical notes (papaya), and peach. Citric. Not bad.
In the taste a stronger tropical note, pineapple too. A bit of not great sweetness.
Not exacly our taste.

Pours golden clear with nice thick frothy head. Smooth as cotton and not too sharp for a ipa. Notes off subtle Citra, nectar, peach and Simcoe cross hops. Great!

Smell: Citrus with some danky notes.

Taste: Mild sweetness, then danky. Some breadiness and some booze comes through. Not particularly bitter.

Overall: Nice to see Coronado in MN, I had a few beers of theirs when in AZ. Stingray is a pretty good DIPA, maybe the booze shows up a little more than it should. Worth a try.

Appearance - Pours relatively clear and golden orange in color with a white, near finger width head. Fair retention results a thin, broken layer of suds and a fair ring around the edge of the glass. Lacing is fair, mostly consisting of thin, broken lines and some spotting.

Taste - Follows the nose. Soft, but juicy and tropical with notes of guava, mango, orange, grapefruit, peach and a hint of pineapple. Light spice. Faint bready malt base. Finishes with mostly juicy with a hint of acidity and a trace of citrus pith bitterness.

Overall - Definitely the prize of the 24-pack picked up at Costco, but unfortunately it's not so great that I'd be prompted to buy the case again. Maybe if I found it riding solo in a sixer I'd give it a go, dependent upon the asking price.

Stingray Imperial IPA from Coronado Brewing Company
Beer rating: 88 out of 100 with 201 ratings