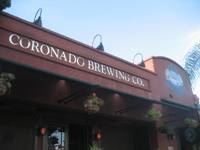 I was in San Diego a few weeks ago, and on my last day I went over to Coronado with a random guy I met up with on the ferry over, he just happened to be at the same conference as me, and a beer lover as well. We were both looking for a quick lunch and a pint and this place was well suited.

We sat outside, but the overall atmosphere from walking in and around a bit was of a decent brewpub, nice music, nothing that really drew my attention either positive or negative.

The food was good, and the beer was pretty dang good too, I had the Idiot IPA, and it was incredibly fresh and hoppy. Damn that was tasty stuff.

Our waitress didn't really pay us much attention and wasn't exactly great, she was pleasant, but over the course of the meal she only came to check on us twice including bringing the food and the ticket. Somewhat frustrating.

Great beer selection, the one IPA that I had was fantastic, and they had a few other guest taps from local breweries, notably Stone's 14th which I had a small sampler of. I was impressed.

Food wasn't bad by any means, I had a BLT with Avocado and it was fresh, and tasty, and a pretty good portion too. No glaring issues with the food.

Overall it was a lot cheaper than the other places we had been to that entire week in SD, especially for being in a somewhat "touristy" area. I think for my pint and sandwich it was around $14, really reasonable.

Definitely recommend stopping by if you're on Coronado and are looking for a pint and some food.