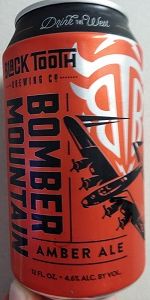 Notes: If you spend any time in Sheridan County someone local will tell you a different story about “Bomber Mountain”. The flavors present in this medium bodied Irish Red Ale vary as widely as the tales, from biscuits and caramel, to cotton candy there is something for everyone to enjoy and more importantly to remember, about this sacred ground at 12,887ft above sea level.

Pours a clear amber-copper color with a skiff of white head that immediately disappears. Some swoops of lacing; little retention. Smells of light molasses, pepper, oats, crusty bread. The flavor is a little husky/grainy with some caramel, and an astringent finish to the point that there is almost a hint of tartness that kind of reminded me of ginger. Light-medium body, very active carbonation, dry finish, crisp and quenching.

Decent beer overall, quite drinkable. My only real gripe is that the astringency got to be a little much as I worked my way through it. Almost felt like drinking iced tea with lemon at times. I would probably have it again if it was available or free. Otherwise, nothing to write home about.

Drinking from a 12 ounce can describing the brew as essentially a grab bag of flavors. “From biscuits and caramel, to cotton candy…” I can see that, or taste that. I think the sweetness stands out the most, but there’s a decent red ale underneath. Pretty easy drinking, if a little thin for my taste. 2017/06/13

Had this at yesterday's Riverfest in Casper.

It poured a clear amber with a small head of foam, a little bit of lacing.

The smell had some caramel malt and earthiness. Very light aroma.

The taste was sweet from the caramel, musty from the earthy element, pretty nicely balanced and an easy drinker. Not too shabby for the usually boring style.

A bottle left over after GABF judging and given to me as a reward for my volunteer efforts. Entered into the GABF competition as an Irish Red, so this may be mis-classified here on BA. I will rate my bottle as an Irish Red.

Pours a half finger of light tan head over a clear brown-rust liquid. Perhaps too dark for the style. Smells dark malts with mild hop grassiness. Mineral, light nut, and chocolate.

Tastes chocolate and nut with mild roast grains. Nearly dry enough for the style, but the dark grains are too strong. Has a mineral bite that would like be sharper if chocolate flavor didn't detract. Minimal hop flavor and low esters (primarily pear). Dry finish with fine effervescent carbonation that helps play up the mineral bite. A tad bit more chewy than I would expect.

Not to style, but a nice beer if just consumed by someone not concerned about such things. Which is what I think I will do for the second half of the bottle.

Poured from 12 oz can into pint glass.

Mouthfeel: light to medium bodied with a damp finish.

Having given a review of another , similar style (which was outstanding) earlier, I was wary to do this one on the same day. Curiosity got the better of me...

A: Golden amber, which is what the beer claims to be--not an Irish Red, as stated here. Head is a little short-lived and somewhat fizzy, but alright.

S + T: Soft, caramel malts... little else. The flavour is also largely toasted, somewhat bready malts. There is essentially no hop presence in this beer at all. The taste does appear to be one that grows on the drinker with a few sips, though.

M + D: Medium bodied, balanced well with a moderate carbonation. This beer is among those that I may not rave about incessantly, but rather, pick up from time to time because it's not terrible.