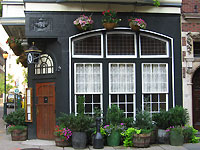 View: Place Reviews
Reviews: 8 | Ratings: 15 | Log in to view all ratings and sort
Reviews by JohneHoodlum:

Wait, not only is this place on BA, but it's been open for the better part of a decade? Well shit. With the parade of IG "models" walking into this joint I just assumed this was the hot new thing.

This place has a uniquely sort of chic designer hunter lodge vibe to it. When you come in, you're apparently supposed to know you need to go in further and up the stairs. No biggie, they have a huge cut out section in the second floor wall from which the host stand can watch down on you to ensure you don't get lost or confused lol.

Service is as attentive as you might expect, because really, this isn't a pub but closer to an upscale restaurant, and they'll be sure to get you your face time with the waiter. The food is what you should be here for, and that's only if you are intrigued by, or very familiar with (and fondly so) British food. Really, British food is weird af and there's a reason it isn't one of the more respected cuisines of planet Earth, but our orders were well made nonetheless.

The beer selection was actually pretty small, but they had a decent variety of some respectable options. I just had a bottle or two of Saison Dupont, which handily made up for a shite experience at the wildly overhyped Monk's Café.

The food and service at this English style hip pub was great. The beer selection isn't anything special, but they had a couple beer engines, which was fun. The cask ales sounded unique, and would like to revisit. The place felt a bit too... specific (?) for me. It was an English style house, turned into a pub by a group of American hipsters, with English style dishes slightly modified in an American fashion. Once again, the service was great, and the food was great.

A very stylish, carefully decorated English pub atmosphere. The vibe is kind of Harry Potter meets hipster gastropub. The food is creative and quite well done with pretty much everything being a modern twist on something that is, if not truly based on traditional pub fare, at least a nod to old Blighty.

The service was very good and professional, even when they were fairly busy. The beer selection is good, but not truly great, especially compared to what is often available in Philadelphia. Beer seemed well kept and the selection of three casks is a nice thematic touch.

Overall, this is a neat place to see and eat and a decent place to drink, but the beer is definitely the least of the reasons to visit.

Was in town for a few weeks and decided to give this place a go after reading some reviews. Like the others noted, it was like walking into an English pub or maybe someones house...it had a great vibe, there were plenty of people and I think that they had some classic rock playing over the system, until a football game came on. Like the other noted, they had a good selection US and UK selections...I think that I had a Sly Fox Bitter on cask, which was really good. I also had a piece of fish and some kind of vegetable. Both were really well done and I found that my meal was really enjoyable. When I got the check though, I about fell off the bard stool...$10 per pint...I found that to be a little outrageous. Overall, another great addition to the Philly beer scene...I will most certainly be back the next time that I am in Philly.

Nice beer selection here, with some fresh english style beers when I was there. Prices weren't bad either

Hanging out in Rittenhouse and decided to stop in for dinner. This place is like stepping into a British pub. They had a good assortment of beer, offering both US and UK. Our waitress was decidedly disinterested so we wound up just getting beer and a cheeseboard and leaving. Considering what Philly has to offer, it didn't tickle my beer fancy.

This place was pretty average. Fancy British-style decor and barware. There's a busy scene downstairs with a good sized bar and lots of tables. I flew right by the second floor, which seemed like all dining area, and went right to the third floor, because I knew that it was here that there was a small bar (seats about 5-8 people) that serves beer from 3 casks. Supposedly these 3 rotating beers are "rare." Generally simple British or British-style beers on tap, and British fare on the menu. The food I sampled has been good so far, but seems a little on the pricey side. There's a rather large staff, and they seem pretty on the ball, and the bartenders were pretty friendly.

It's nice, but considering all factors, it's pretty easy to come to the conclusion that this is a hipster joint / tourist trap wannabe venue. Beer destination? Meh.

I've wanted to visit this place since they opened and finally went with my wife for dinner last night. There are very few places that sell British beers on cask so I was really excited to find out that they would be in regular rotation here.

The building is basically set up like an English countryside home with three floors and two bar areas. Pretty dark with lots of wood accents and earth tones along with stuffed foxes, and other interesting things adorning the walls. The first level is a large bar area that is surrounded by high tops and dinning tables. This is pretty much like an old English pub and the restaurant portion really starts on the second floor where the host stand is. There s a small dinning area with two high tops and a very long table for larger parties. The third floor is the man dining area with around 25-30 tables and another small bar area. It feels like the top floor of someone's house. A very cool layout and interesting take on the English pub/Inn.

This is a Stephen Starr restaurant so I was expecting the food to be good but it was incredible, exceeding all of my expectations. Very pricey but every dish was amazing! The fish and chips was $21(!) but the piece of fish was massive and coked perfectly. Served with malt vinegar and the chips were thrice fried. The cheese board came with three excellent cheeses, biscuits, grapes, honey, quince jam and the portions were substantial. Another hit was the rabbit pie. Prepared like a shepherd's pie with smoked bacon, cippolini onions, oyster mushrooms and grain mustard. Perfection! They also have a large selection of craft sodas and coffees to go along with their dessert menu.

The biggest attraction abut this place and what I was looking forward to most as the British beer. Unfortunately, they only have three casks and two of them had American beers on. Boo!!! One was a barleywine and anther a brown ale. Why would they do this if they have the opportunity to serve three British ales on cask at the same time? Extremely disappointing. That being said, the one real on cask that they had was sublime(Thornbridge Jaipur English IPA) and they had around eight regular drafts, six of which were English, two of which were English styles from American breweries. In addition, they had a decent bottle selection that encompassed many different styles and countries. I just wish they had more beers from the U.K.

Another cool feature of this place is that they offer half and imperial pints of everything on draft. This is good if (a) you're a ticker, (b) you want to try everything and (c) you don't want to spend $12 for a 20z cask beer!

Overall, this s a welcome addition to the amazing Philly beer scene. The atmosphere is great, the food is wonderful and they have a decent selection of British beers. They just need to utilize the casks more appropriately. I know that this is a new format for most people but two of the three beers they were offering don't benefit from being served this way. I think it would be more successful if they kept true real ales on so newcomers can experience the true potential of cask beers. Other than that, this place is pretty awesome.

Well, the atmosphere is victorian english pub. This sprawling place consists of a corner bar area, a mid level bar area, and an upstairs group of rooms that have a lot of dog stuff. They put a lot of money into replicating the pub atmosphere. the fish and chips are excellent but no bargain. the english cask ales are tasty, though I was disappointed not to see fuller's. beer selection outside the handpumps is okay, with a handful of locals including yard's. overall, this is a great place to drink and feel the english pub experience, but you'll pay.