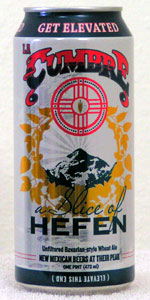 Notes: A traditional take on a Bavarian classic. Poured into a 23 oz. Hefe glass, this beer is served mit hefe with a voluminous white head. The aroma is everything we love in the style; clove, banana and vanilla. The body is rich and creamy, yet finishes fairly dry and is as refreshing as any beer you’ll drink here or anywhere else. By popular demand, this beer is now a year-round offering.
View: More Beers | Place Reviews
Recent ratings and reviews. | Log in to view more ratings + sorting options.
Rated: 3.56 by SViterileroux74 from Texas

Rated by Manta200 from Kentucky

4.09/5  rDev +1.7%
look: 4.5 | smell: 4.25 | taste: 4 | feel: 4 | overall: 4
Had on tap. Cloudy bright yellow body with a blowing white head and moderate lacing. Wheat, doughy bread, harsher yeast, lemon, moderate clove, and light botanicals in the nose. Taste is much the same, but the yeast being somewhat harsh does detract a bit, wheat, clove and lemon very nice though. Feel is well balanced, yeast is not a problem here, bright and chewy. Good for a moderate spring day, would have again
May 01, 2022

T: banana bread dough; rather spicy, clinging to the back of the palate, almost red hot dollar at the back corners of the throat... semisweet malt lingers for a bit through the finish, but there seems to be a subtle dullness in the aftertaste, just lacking a little accentuation

F: smooth, silky, almost creamy; perfect vanishing finish, ideal amount of residual slime left on the palate... could drop off with a little more snap and levity, but otherwise hitting the marks

O: tasty, excellent for an American attempt at the style... all the hallmark flavors are here, just perhaps not at the relentlessly intense as a Weihenstephaner (1856)

Appearance - Instructions on the back say to pour 2/3 of the can into an angled glass. Then to swirl remaining 'yeast' and to pour vigorously for a full, rich head. A normal 2/3 pour into a standard weizen glass (also pictured on diagram) already brought the head to the top of the bottle so it's not really even possible to follow the instructions unless you save the rest for when the head dies out after a few sips. Hazy straw gold body, which becomes cloudy when you pour in the yeast after. Large medium-tight foamy head with decent retention, regular cascading lacing that sticks in distinct strata as the head breaks down. Looks great. 4.5

Taste - A little too thin, water, bland and yet somehow also offensive like it's skunked or something. Which would be weird considering this is in a can. Actually like licking dry cardboard and tasting metal at the same time. 1.75

Mouthfeel - A little thin and watery for the style. And noticeably astringent. 1.75

Overall - Worst beer I've ever had in the hefe style. Disappointed. Not the 90/100 beer I was expecting. Far below par. And there's no discernible damage to the can, not even a tiny dent, so I don't know what excuse I can give it for tasting like it's stale or skunked. Bad batch? Left in hot truck? Whatever is going on, there's no way a beer this terrible could be rated 90% unless this is just a bad can. Only way I could possibly rate it lower is if it was infected and was so bad that I couldn't even finish it. And while it's bad enough that drinking it is an extreme chore, I think I can finish it. 1.75

Reviewed by Beer_Right_Back from Arizona

Reviewed by TH28 from Florida

4.03/5  rDev +0.2%
look: 3.25 | smell: 4.5 | taste: 4 | feel: 3.5 | overall: 4
16oz can. 1/28/19 can date. Appearance: Dark golden with a light haze and a minimal white head with minimal lacing.
Aroma: Oh my, the clove. Banana and bubble gum very strong too.
Taste: Moderate malt sweetness highlighted by pear fruitiness and clove, followed by a light bitterness and a touch of spice.
Mouthfeel: On the lighter bodied side of the style, with a moderate carbonation
Finish: Pear fruity esters linger long after the finish. A bit of banana as well.
Overall: This beer has an unattractive appearance for the style, appearing a little oxidized with minimal head. The aroma is quite wonderful and the flavor pulls through as well. Pear esters show up here in addition to the typical banana and clove. If you cleaned up the appearance and mouthfeel, there’s a world class here in here

Served into an Erdinger hefeweissbierglas.

APPEARANCE: Has surprising clarity for a hefeweizen. Body colour is copper, not the traditional vibrant orange. Head is off-white and somewhat creamy, but it lacks the softness and overt creaminess of the best expressions of the style (e.g. Ayinger). Head recedes fully within 5 minutes, leaving wisps of messy lacing on the sides of the glass.

I wouldn't know it was a hefeweizen to look at it. More a kristallweizen going sheerly by appearance.

AROMA: Earthy yeast, banana, faint vanilla, a hint of clove. No orange fruit esters or citrus, unfortunately. Lacks the freshness of aroma one would expect in a top tier expression of the style.

Suggests a Kristallweizen lacking in terms of depth of flavour and freshness, though it's appealing in its own right and checks the boxes needed to satisfy style conventions.

TASTE & TEXTURE: This is oddly vanilla and banana forward at the expense of any spicy yeast or orange peel/citrus. There's really none of the latter, and no clove to impart spiciness either. I wonder which yeast was used? It seems underattenuated.

Simplistic and shallow in a style that doesn't really demand that much complexity or depth to begin with. It's not imbalanced, but I do personally prefer yeasty, spicy, and orange peel emphatic hefeweizenbiere to vanilla or banana dominant ones, so this doesn't really do it for me.

I find no off-flavours. There are no overt hoppy notes. Malt bill seems to be 2-row and wheat, though the wheat lacks a fresh flavour.

Medium-bodied, somewhat refreshing, smooth, wet, approachable, well-carbonated. Could be softer and more refreshing; it's not the summer quencher I expect in a great beer in the intended style.

OVERALL: American hefeweizenbiere rarely measure up to German expressions of the style, even when they're compared to German expressions that have been shipped across the Atlantic under less than ideal conditions and have subsequently sat on tepid shelves for months before being tried. This is a better than average American attempt at the style, but it's not a beer I'd buy again. Tastes like some of the 20 cent per can German hefeweizens you can buy at Lidl or Carrefour. I'd sooner reach for Live Oak's vastly superior hefeweizen if I must have an American stab at the style, but when it comes down to it this is one style that German brewers have perfected and few else have mastered. At least La Cumbre didn't try adding grapefruit or some other such nonsense.

4/5  rDev -0.5%
look: 4 | smell: 4 | taste: 4 | feel: 4 | overall: 4
Very good hefe!!! Had it on tap at the Lucky Bull in Carlsbad NM. Pours an orange/amber color with an average size white head with good retention and lacing. Aroma and taste are just right, yeasty, banana and cloves. Nice blend of traditional hefeweizen ingredientsgood flavor. Mouthfeel is refreshing and slightly astringent. My first New Mexican beer! This one is a winner!!!
Nov 13, 2018

Reviewed by TheSixthRing from California

Taste - Banana forward with lesser clove spice playing second fiddle. Bubblegum funks hits mid-taste and follows through to the finish. Aftertaste lingers with the spice and bubblegum, but banana is still out front.

Overall - A traditional hefe with strong banana flavor leading the charge. Good, but not quite on the level of those amazing German hefes that have been brewed and dialed in before I was even born.

A hazy orange with a dense, offwhite head with good retention and lacing this looks great. The nose is classic hefeweizen. Bread, banana, clove, some citrus brightness and a little honey. Toasted bread, some grain. The palate opens spicy and grainy with a blend of clove, toasted white bread, banana and a little white pepper. A mild acidity is present, mildly carbonic and pairing nicely with the banana and clove. Medium light in body and moderately carbonated, this beer finishes spicy and mildly grainy. Just a hair thin and while the flavors are good, they aren't perfectly integrated. Quite good, this beer tastes and feels better when gulped rather than sipped.

Overall: There are some nice elements here, but I would like to see the tangy aspect toned down and a creamier mouthfeel

Thanks, M_chav, for the opportunity

Rated by sunsjammer from Arizona

Reviewed by strohme2 from Michigan

4.11/5  rDev +2.2%
look: 3.5 | smell: 4.25 | taste: 4.25 | feel: 3.75 | overall: 4
16 ounce can dated 2/2018. Received in a BIF. Poured into a tulip. I don't have a traditional hefe glass.
Does not look like your typical color on the pour. Deep golden orange, hazy. I followed the directions to swirl the last 1/3 of the can to mix in the yeast. Small head with some lacing. Typical notes of a traditional Hefeweizen here. Banana, cloves wheat and yeasty phenolics. Some spiciness too. The taste matches the nose. Starts off with some banana, sweet citrus and honey. Clove and bubblegum finish off the beer. Some breadiness makes it In there too. The body lacks any fluff. Looking for a soft pillow feel which this beer does not have. Overall, a solid flavorful hefe.
Apr 09, 2018
Rated: 3.68 by Taphouse_Traveler from Florida

Beer poured a golden orange with a white head that disappeared pretty quickly.

Nose was very nice with classic hefe attributes of banana and cloves.

Taste was good as well. Banana bread and cloves dominate.

Mouthfeel was light to medium bodied and pretty smooth.

Overall a fine example of the style!

Reviewed by joedvegas from Nevada

3.79/5  rDev -5.7%
look: 4 | smell: 3.75 | taste: 3.75 | feel: 4 | overall: 3.75
Dark gold color with medium haziness. One finger white head dissipated quickly. Strong scents of wheat, old banana, grapefruit and wet leaves. Taste is dominated by the wheat, but also has hints of bananas, honey and vanilla. Just not a huge Hefeweizen fan, but this one is a good one if you like that style of beer. Feel is light to medium bodied, lingering palate coating finish.
Nov 06, 2017
Rated: 4 by cgrunin from Texas

Reviewed by mmmbeer89 from New Mexico

A: The beer is a light gold color with a thin white head that fades quickly and leaves a very thin lace on the glass.

S: The aroma contains wheat, caramelized malts, bananas and a touch of hops.

T: The taste starts out bready with flavors of wheat and a hearty but not too heavy malt character. Then some sweetness comes in from flavors of bananas, caramel and a little bit of citrus. The hops presence is mild but complementary and brings a very good balance. The after-taste is slightly sweet and slightly bready.

O: Tasty, goes down very easily, not too filling, decent kick, very good representation of style, this is a solid beer to drink for a long time if you’re in the mood for the style.