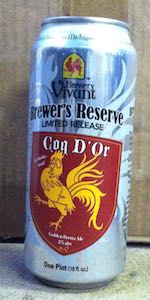 Reviewed by Kurmaraja from California

3.99/5  rDev +1%
look: 3.75 | smell: 4 | taste: 4 | feel: 4 | overall: 4
Smells and tastes quite a bit like a funky dry apple cider. Quite light bodied. Carbonation fizzes out quickly leaving a beer that looks quite a bit like carbonated cider as well. The slightly watery finish is the one downfall here. An excellent hot weather quencher though.
Jul 20, 2015
Rated: 4 by williamjbauer from Colorado

A- The can looks nice, it's their typical limited release can with a custom sticker that looks nice and goes well with the name and I think it's funny it says "It's funky man", I think it's pretty eye catching. It poured a fairly clear very pale yellow color that took on more of golden color when held to the light with a fingers worth of bubbly white head that quickly faded to nothing and it didn't leave any lacing behind. This isn't the best looking beer, the color is very light and head, lacing and retention were both pretty disappointing.

S- The aroma starts off with a higher amount of medium sweetness followed by the brett being the first to show up and it imparts that typical funky brett aroma with some light musty and horse blanket like aromas. Up next comes a great fruity aroma with some citrus fruit and lemon aromas showing up along with a pretty nice pineapple like aroma and a slight bit of green apples. Up next comes a wet straw aroma with some sweet malt aromas showing up in the background. This beer had a very good aroma, it had that nice brett aspect that i expect but the fruity aspect seemed to be on another level and I liked that.

T- The taste seems to be pretty similar and it starts off with a slightly higher amount of medium sweetness followed by the tartness being the first to show up and i would says it's on the slightly higher side of medium and it's followed by those funky brett aspects with the wet straw and horse blanket aspects seeming to stick out the most. Up next comes the same fruity aspects that I got in the aroma with lemon seeming to show up a little more than the pineapple. On the finish there's a slightly bready and slightly grainy malt aspect with a funky, fruity and grainy malt like aftertaste. This was a very nice tasting beer, it had great balance and I think the tartness was at just the right level.

M- Smooth, crisp, pretty refreshing, fairly tart, light bodied with a medium amount of carbonation. The mouthfeel was pretty nice and helped the drinkability, I have no complaints.

Overall I thought this was very good beer and a very good example of a Golden Bretta Ale, I submitted this as a Belgian Pale Ale simply because there was no Golden Ale style available and it isn't exactly what I would call a American Wild Ale, I find it more similar to funky farmhouse Saison than anything. This beer had great drinkability, it was smooth, light, crisp, refreshing, not too filling and the taste did a great job at holding my attention, at 5% abv I could easily drink a four pack of this stuff and I think it's the perfect beer for those hot days in the summer and I think taking a couple of these to the beach or out fishing would be perfect. What I like the most about this beer was the balance, it was spot on and each aspect seemed to stick out just enough. What I like the least about this beer was the appearance, it just wasn't that appealing to look at and I would say it's the only weak point this beer had. I would for sure buy this beer again, if I ever see this beer again I will buy as much as I can no questions asked and I would recommend this beer to just about anyone. All in all I really liked this beer, in my mind this is pretty much the perfect brett beer, it's got just enough funky and barnyard like aspects with a great fruity aspect that sets this beer apart from a lot of other brett beers. I wish Brewery Vivant would make this beer again, it would be great to see this as a seasonal release. So far this is my one of my favorite brett beers and one of my favorite Brewery Vivant beers. Great job guys, this was one great beer that I really enjoyed, keep up the great work.