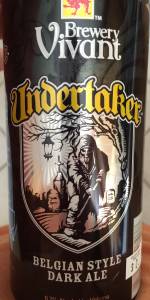 Well right away, I don't know that this is a brown ale. Did brown ale subsume the belgian strong dark ale category? In turd resting. Anyways, lets do this Taker v. Mankind hell in a cell match already.

Pours black, not brown. If there was brown, it would be the 3/5" head. The nose was mostly yeast: spice rack, smoke, brown malt, dark fruit and a little bit of alcohol burn/bitterness.

The taste was manageable. I thought I was not gonna be about it, only got the can for the Undertaker reference, thought it was gonna tombstone me but it just gave me one of those soft chokeslams. Dark toffee and prune note. I thought the malt quotient was more in the vein of earthy dark moreso than roasted dark.

As it warmed, there was more nuttiness, and the bitterness became more tempered. These never will be my jam, but I can drink a few ounces of this no problem. All 16 ounces might be a chore solo.

Pours dark brown with a smallish fairly pale head and a lot of carbonation. Smell is Belgian. Spices, anise and toffee, dates.

Taste is surprisingly on the toffee side with hints of anise.

A: Dark black in color with a Mahogany color when held to the light, and a large soft white tan head.

S: Roasted aroma with coffee, and a sharp scent in the finish.

T: Roasty and sharp up front with coffee notes. Finish is where the Belgian character comes through, with clove and spice.

M: Medium light in feel, with fairly high carbonation, and a semi-dry finish.

O: For me this one is a little off the mark, the roasted stout character and the Belgian flavors don't seem to meld together. Although it did seem to start to come together when it warmed up.

A chocolate brown color with a heavy froth of a head, 1/2 finger stable.

Aromas of figs, nutty brown aromas, secondary-fermented cocoa nibs, and the peppery dark spice of Belgian yeast. Some weird stuff going on here but nothing too off the mark.

Flavor is kind of figgy and sappy, kind of like a maple syrup-infused prune juice. More of those nutty chocolate notes start to seep through as well, with slight veggie and spice coming in. The more I drink it though, the more those rich nutty chocolate flavors come in. I'd say it's like a peppery yeasty porter. Very unique - I like it. Oh, and slight coffee acidity as well. Quite a pandora's box here.

Feel is very carbonated, with a spiciness to it, and a slightly drying finish. I always hate this category, it's hard to describe.

Overall, I can understand why many people DON'T like it, but I totally see this being a hit if they marketed it as a spicy, Belgian porter. It's got a pretty nice warming holiday thing going for it, with the chocolate and nuts, and the peppery yeast reminds me of peppermint a bit. I'd ...probably... have it again.

Not my favorite beer. However, I'm pretty biased to coffee-esque, dark beers because I don't enjoy coffee normally. That being said, it wasn't an awful beer.

The name is perfect. It is a strong, dark, heavy beer bursting with coffee and chocolate aromas. The taste profile has notes of malt and caramel sweetness. The beer is very smooth but definitely created for someone who enjoys DARK beers.

Don't drink a lot of dark beers personally but I did enjoy this one. Some coffee and chocolate notes to it. Would recommend to anyone who likes dark beers.

harleyfriesen from District of Columbia

It has dull dark color. You can smell coffee aroma right after you open the bottle. It tastes like dark coffee and cigar, very smooth, and highly carbonated. Overall, it's a okay beer, don't quite enjoy the cigar taste.

Both the color and smell are that of rich coffee, very dark with some maltiness. Taste went down very smoothly with a slight and pleasant smokiness. Rather enjoyed this beer.

Flavor is more pear and apple dominant throughout, with a touch of caramel sweetness initially that fades to roast and char at the finish.

This beer looks like Coca-Cola. It's smell is sweet and smoky like burned wood. The taste resembles charcoal and coffee. The texture was rather dull and slightly hoppy. I was not a huge fan of the smoky flavor.

From the CAN: "Freshly Brewed in Michi[CAN -] Special Limited Release"; "Tier 3 Single Batch Release"; "BELGIAN INSPIRED DARK FARMHOUSE ALE This hearty dark ale is fermented with our rustic Belgian yeast strain which gives the beer a farmhouse tartness followed by big dark chocolate notes, and hints of black cherries. Fermentation temperatures often climb past 90 [degrees] F which builds the distinctive flavors. No adjuncts are added to this beer - these robust layers of flavor are yeast driven. Listen to that lunatic in your head, dust off that vinyl, pour the beer into a glass and sip your way into a happy, chilled out groove."; "GLASSWARE & PAIRING

The Crack! was like music to my ears & the CANticipation was akin to that of Cookie Monster & his baking cookies. Siri, please check the timer! Ohhhh. My gentle Glug raised two fizzy, foamy fingers of deep-tan/light-brown head with moderate retention. Color was Black/Opaque (SRM = 44), allowing ZERO light penetration. Nose was hot, in that it filled my sinuses with a shimmering alcohol heat. Whoo! ReCANvering from the shock, I got a dark chocolatiness along with scents of dried, dark fruits and more of that alcohol, which was unabating. Whew! Mouthfeel was somewhat thin, not exactly watery, but close. The taste was more muted than on the nose. Here, I got a much more pronounced smokiness, initially. This was followed by a light chocolatiness & dark fruitiness. Finish was semi-dry, but seemingly muted. It was not bad, per se, but if I were faced with a choice between this or Tart Side of the Moon, I would go with the latter. This just lacked overall Ooomph! to make it worthwhile.

Deep dark brown with huge tan head. The aroma is mocha, lactose, bread dough and fig, with minor smoke flavor. In addition it has chocolate powder and coffee flavor.

Dark brown color. Malted flavors hinting at a chocolate or coffee flavor. Banana flavor mixed in and a little sweet. Ok beer but not my favorite. Wouldn't order again.

When poured, this beer has a very dark color, almost like a pepsi or cola. There were also a lot of small bubbles, you could tell it was highly carbonated. The smell was very malty with strong chocolate notes. I sensed it was going to be a thick, full flavored beer. Surprisingly, it was not too heavy of a beer. It was more sweet than imagined, very carbonated, not too thick. I also tasted a lot of cocoa. Very good, would try again.

Nothing that wrong with this beer but nothing to take it above a decent Belgian ale either. Minimal head, relatively light feel, decent nose, fine enough taste. Vivant usually does better.

This beer appeared very dark when first poured, so I knew it was going to resemble a more coffee / toffee taste. It was malty and did have a lingering coffee aftertaste.

This beer is extremely dark, thick and heavy in appearance. It tasted extremely malty with chocolate and coffee flavors. Still wood and smokey hints, but more rich on the coffee side.

Interesting, this Brewery Vivant.
Their first offering, the Saison, was OK... but much better ones exist.
The second offering I had was one of their many Belgian IPA experiments... and we didn't get along.
Never one to give up on brewers trying really hard, I gave a third try... this time to Undertaker.
Vivant did not strike out.

In fact, it is a very enjoyable dark Belgian that kept giving me different flavors, mostly likened to dark fruits... very reminiscent of a Dubbel, but without the carbonation typical of that Trappist-inspired style. Undertaker has a slightly funny after-taste that interferes with my good feelings about this ale... besides the poor choice of a name for this ale.

While I am a sucker for all the progressive, sustainability stuff that Vivant has as its philosophy, you don't have to be that way to enjoy their ales. Although Vivant might try a new name other than Undertaker, I recommend this to any Dubbels fan.

Undertaker from Brewery Vivant
Beer rating: 82 out of 100 with 248 ratings