Pepper In The Rye
Brewery Vivant 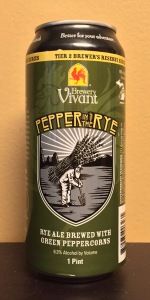 This beer looks light from the pour. It is a golden yellow, slightly amber color. It has aromas that are refreshing and sweet: apples, sweet and crisp. The taste is very lightly hoppy but is definitely sweet and apple tasting with some yeast present. This beer was good overall and I expected it to be a little more spicy.

Golden brown appearance makes it appealing to the eye. Has an apple juice and floral aroma. Floral, apple and pepper notes that linger on the tongue. In addition there's a little bitter hop flavor. I found this beer to be clean and refreshing.

Taste: spicy hops + floral, sweeter as it sits in your mouth

This beer was delicious, easy to drink, yet still was strong and flavorful!

A really beautiful golden color which a yeast and hoppy scent. You can taste the spiciness from the rye as well as a sweet, "floral-like" taste. The after taste turns sweeter as it sits in your mouth. Overall a really interesting and delicious beer!

Another really nice Belgian style beer from Vivant but the pepper was barely noticeable. The rye as well wasn't very intense and this is definitely still a Belgian first. Really enjoyable but not as interesting as I was hoping for.

Look: This sorta drags this downs...unless you love rustic. Dirty orange. Clearly unfiltered (hah, clearly unfiltered, get it?), dingy, next to no head, I'd rate it lower if it wasn't so curmudgeonly awesome.

Aroma: A bit of citrusy hops. But other than that, REALLY clean. The exact opposite of the Look. Interesting, cool. Really appealing!

Taste: A great balance. Spicy (although to be fair, I'm eating this with Buffalo cauliflower at Terra in GR). I think the crazy color and lack of clarity are actually indicators of the maltiness wrapped into this.

Overall: Don't let the look of this thing fool you when it hits the table. It's really delicious. And contrary to the listing here, it is not retired....or has been reborn.

Appearance: Hard pour into a Sam Adams Perfect Pint did nothing for a head. It came up, and it went faster than it would from a pour of pop. Beautiful orange/gold color to this beer though. Despite the laser etching at the bottom of the glass, this beer has a very slow stream of very few bubbles coming up from the bottom. Looks a bit dull in the glass, but at least the color's great. Oh yeah, and no lacing here either, since, you know, no head = no lacing.

Smell: Honestly, a Belgian funk. It took me a few ounces of this beer to even really notice it but now it makes sense, since it's Brewery "VIVANT" which is Belgian for "funk" ... not really. It has that usual trunk funk I get out of Vivant's yeast, with some banana. As far as the rye and even peppercorn, I don't get them on the nose, unfortunately. There's maybe the slightest essence of pepper, but certainly no rye to my nose. It's disappointing in that it doesn't smell like described, but it still smells pretty decent.

Taste/feel: The carbonation is deceptively sharp -- it prickles up a bit on the tip of the tongue. The body as a whole is just decent. Pepper in the Rye isn't watery, so that's obviously good. For the taste, I find that this beer is all about the aftertaste. There's a very subtle rye flavor underneath the peppercorns on the start of each sip, but the finish is slightly sweet from the malt, with some pepper and a little bit of the Belgian yeastiness. It makes for a pretty unique/distinct flavor, but it's not very potent. As others have said, where's the rye? It's really only maybe traceable mid-sip, and that's about it.

In sum, this is a pretty nice, easy drinking beer, but one that I would say is certainly not worth a re-buy from me given the price point... it's just not blowing me away. The pepper isn't particularly intense, and the rye is nearly non-existent. It's a pretty tasty Belgian ale though, and I'm not sure that can really be argued.

I normally love Vivant and think they do some very tasty and interesting things, but I just don't find this beer to be either of those things. I had high hopes but this is at best an average beer.

Appearance: pours a deep orange with some reddish hues. a finger or just less of an off white head with good retention and a little bit of a lacing. strong clarity and brightness to it.

Taste: opens with some peppercorns. taste opens up with some smooth malts ranging from caramel sweetness to slightly spicy rye. some hops play in lightly. mainly with citrus and a little bit of spicy earthy bitterness.

Mouthfeel: medium bodied. quite a bit of bitterness between the hops and the spicy pepper. lingering spice.

Overall: a solid and interesting rye beer. also had this on firkin at the brewery and the combo of the smoothness along with all the spiciness was killer. the canned version is not so bad either but could use a little bit of smoothness.

I picked up a can of Brewery Vivant's Pepper In The Rye last week for $3.29 at The Lager Mill. I'm always down to try a new Vivant beer and I'm interested to see what they can do with a Rye beer, so lets see how it goes. No visible bottling date, but I know it's fresh. Poured from a tall 16oz can into a tulip just like they suggest.

A- The can looks nice, the design goes a little with the name and I think it's just a little eye catching. It poured a fairly clear orange amber color that took on more of an amber color when held to the light with a little over a fingers worth of off white head that died down a to thin ring that stayed till the end and it didn't really leave any lacing behind. This was a pretty nice looking beer, but i wish it had some lacing.

S- The aroma starts off with a medium amount of sweetness with the malts being the first to show up and they impart some nice grainy, toasted malt, light sweet malts, bread crust and creamy grain like aroma. Up next comes just a slight fruity aroma and it's followed by a spicy rye aroma with just a little bit of peppercorns which isn't that noticeable. This beer a had pretty good aroma, but I wish the pepper corns showed more.

T- The taste seems to be similar to the aroma and it starts off with a lower amount of medium sweetness with the malts being the first to show up and they impart the exact same malty aspects that they did in the aroma with no single aspect sticking out the most and it's followed by some doughy yeast showing up in the background. Up next comes the rye which is noticeable, but it's a little lighter than I would like. On the finish there's pretty much no bitterness with the peppercorns showing up a little in the aftertaste along with some grainy and bready malts. This is a pretty nice tasting beer, but I wish the rye and peppercorns were a little bolder.

M- Smooth, clean, crisp, on the light side of being medium bodied with a medium amount of carbonation. This beer had a pretty nice mouthfeel that worked well with it.

Overall I thought this was a pretty nice beer and I thought it was a nice example of the style, it seemed to be pretty inline for the style, but I found my self wishing the rye was bolder and I don't think the peppercorns left much of an impact on this beer. This beer had ok drinkability, it was smooth, clean, crisp, not too filling, but the taste didn't do the best job at holding my attention and I think one is enough for me, any more than that and I think I would start to get bored with. What I like the most about this beer was how true to style it was, it had just about everything that I look for in the style. What I liked the least about this beer was that the rye and peppercorns didn't show up more, it seemed like the malts were the star of the show here. I don't know if I would buy this beer again, but I wouldn't turn one down and I recommend it if you like the style, but I can't say I would recommend it as a great beer. All in all I liked this beer and I thought it was nice, but for Brewery Vivant it was just a little a disappointing, I just expected a little more out of this beer and in the end it felt a little bland to me. So far this is now my new least favorite beer from Vivant, but it's still a nice example of the style. This beer wasn't bad, but i think it could use just a little work.