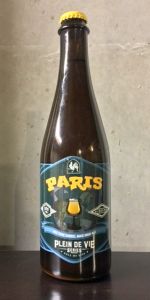 Pours a bright gold color with a foamy head that disappears quickly. Aroma of citrus. Taste is crisp and sour. Higher than normal AND but the alcohol isn't overpowering.

From the bottomless box of Michigan plus goodness from @FlintB during NBS BIF#007.
Beautiful crisp clear golden body. Like a really clean apple juice. Nice little snow white head. Tight and settles in to just some whisps pretty easily.

Nose is kind of sweet and gives away the wine barrel aging really nicely. Buttery oak is in there for sure. Tart sits behind those rounder edges.

Flavour follows up with that really well. Definitely big buttery oak but also hedged with a nice tart balance. Some red wine character and a gentle citrus that's really not super prevalent. Knowing that peppercorns were involved I can find their influence on the finish and aftertaste, but I likely would not have picked it out on its own accord.
Tight effervescent carbonation. Super oaky throughout. Personally I like some oak, but get a little overwhelmed with too much of it (I find this in white wines a lot). I think this straddles that line, but if you're into oak this is going to be a big positive. HOLY SHIT THIS IS 11.5%??!? I could easily believe half of that. The alcohol is hidden incredibly well.
Even though this is aged in red wine barrels, I think this will appeal moreso to fans of white wines... big chardonnays and the like, largely because of the oak.
It's really well made and quite enjoyable. Thanks Brian!

Poured a hazed golden orange with minimal white head.
Smells of tart citrus, some funk, oak, and red wine.
Taste has the acidic citrus bite, the oak is prominent.
Medium bodied with minimal traces of alcohol.
Overall a good choice.

Probably Vivant's finest. A nice wild yeast sour that is mildly kettled with tastes of soaked buttery oak wood along with flavors of orange peel and grapefruit. A slow sipper that is truly delicious. A must try for anyone that likes sours.

Appearance: Pours a golden color verging on copper; the head rises to an inch but fades rather quickly, leaving a few strands behind

Smell: The orange peel dominates the aroma, with wheat bread, peppercorn, oak and funk in the mix

Taste: Stone fruit forward, with underripe peach, at the outset; the orange peel builds along with a sour and funky element, through the middle; peppercorn spice makes an appearance, after the swallow, along with the oak and red wine character

Overall: An interesting beer, no doubt, but one where there might be just one element too many in the mix as everything seems to go in different directions; worth a try but it is not mind-blowing

Thanks, daniels79, for the opportunity

500 ml bottle. (caveat: not a fan, usually of red wine barrel aging nor Brett beers).
Pours with a hazy, apricot-amber body.
Smells like very ripe soft fruits and red wine barrels with hints of peaches and apricots, as well as some green apple, yeast and lemon. Lightly funky here and in the strong flavor where there’s a faint note of leather and some pear. Moderately tart. Medium body.

I picked up a bottle of Brewery Vivant's Paris for $11.99 at The Lager Mill. I've been really wanting to try this beer and I was happy to see it on the shelf, so lets see how it goes. Poured from a brown 500ml bottle into a teku. 2016 Vintage.

A- The label looks nice, it has a clean and classy look to it. It poured a nice orange color that takes on more of a golden orange color when held to the light with half a fingers worth of bubbly off white head that died down to a thin ring that eventually faded away and it only left a little bit of spotty lacing behind. This is a good looking beer, I have no complaints.

S- The aroma starts off with a higher amount of medium amount of sweetness with a nice fruit aroma being the first to show up and it imparts some citrus, orange, stonefruit, pear, pineapple and other fruity aromas showing up in the background and it's followed by the funky yeast which imparts a nice brett funk to it with some barnyard, horse blanket and wet straw like aromas showing up. Up next comes the malts which impart a doughy, pale malt, lightly grainy and light bready aroma with a little bit of spicy black pepper towards the end. This beer has a very nice aroma, it;s complex and pretty true to style.

T- The taste seems to be simlar to the aroma and it starts off with a higher amount of medium sweetness with the fruits being the first to show up and they impart all the nice, bright and juicy fruity flavors that I got in the aroma with no single fruit seeming to stick out the most. Up next comes the funky yeast which shows up just about as much as it did in the aroma with the funk showing up just enough and it's followed by the malts which impart all the same aspects that they did in the aroma and this time they show up just a little more with a slight bit of that black pepper towards the end. On the finish there's a slightly lower amount of medium tartness that doesn't linger long and it has a nice fruit and malty aftertaste. This is a very nice beer, it's complex and the flavors work nicely together.

M- Smooth, a little refreshing, crisp, on the slightly thicker side of being medium bodied with a medium amount of carbonation. The mouthfeel is good and it works well with this beer.

Overall I thought this was a very nice beery and a very nice example of the style, it had pretty much all the aspects that I was looking for with the complexity to match. This beer had good drinkability, i don't think I would have trouble drinking the full bottle. What I like the most about this beer is the complexity and how well the different aspects work together it's very nice. What I like the least about this beer is the maltyness, I wish it was toned down a little. I would for sure buy this beer again and I would be interested to see how it changes overtime. If tour a fan of a sour saison then I recommend trying this beer. All in all I enjoyed this beer and I was little impressed with it, it came together to make for a very nice beer. IT's not my favorite Vivant beers, but it's one of the better examples of the style that I've had lately. Great job guys, this is one tasty beer, keep it up.

Poured from a non dated, 500 ml bottle into a tulip glass.

It is a foggy, bright gold color. It produced a moderate, fairly fizzy white head that disappeared almost immediately.

There are very strong aromas of oak. Also some red grapes, funky yeast, a hint of citrus, and some subtle acidic sourness.

There is an initial crisp/sharp yeasty sour bite. A little peppery with some lemon, white vinegar, and grape. Then it really settles in with some deep oak flavor, and red wine and light grains. The alcohol is not noticeable at all.

The feel is crisp and lively, but fuller thanks to the abv. A clean dry finish.

This might not be sour enough for some people, but it really allows the barrel character to shine. I thought it was outstanding