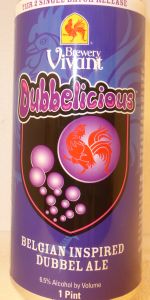 A= The label looks good, it's got a nice design, it goes with the name and it's eye catching. It poured a nice darker brown color that took on more of murky mahogany color when held to the light with a fingers worth of bubbly tan head that died down to a thin ring that eventually faded away and it left a little bit of spotty lacing behind. This is a pretty nice looking beer, I have no complaints.

S- The aroma starts off with a higher amount of medium sweetness with the Belgian yeast being the first to show up and it imparts a mixture of banana, light bubblegum and a mixture of spices that leads right into some nice srone fruit like aroma. Up next comes the malts which have a toasted, caramel and sweet malt like aroma to it. This beer has a pretty nice aroma and it's what I expect from the style.

T- The taste seems to be similar to the aroma and it starts off with a higher amount of medium sweetness with the yeast still being the first to show up and it imparts the same aspects that it did in the aroma with no single aspect seeming to stick out the most. Up next comes the nice stone fruit like aspects that I got in the aroma and this time they are a little juicy. Towards the end comes the malts which impart the same sweet and toasted caramel aspects that it did in aroma and it's followed by hardly any bitterness with some more sweetness taking it's place and it had a nice yeasty and fruity aftertaste. This is a pretty nice tasting Dubbel and it's what I expect from the style.

M= Smooth, slightly crisp, a little on the sweet side, on the thicker side of being medium bodied with a medium amount of carbonation. THe mouthfeel is pretty nice and it works well with this beer.

Overall I thought this was a pretty nice beer and a good example of the style, especially for an American made Dubbel, it seemed to have all the aspects that I look for in the style and while it didn't have that great balance that some of the best Belgian Dubbels have it still turned out to be a pretty nice beer. This beer has nice drinkability, but I think one pint is enough for me, anymore than that and the sweetness might start to wear on me. What I like the most about this beer is how true to style it is, it's just what i've come to expect from the style. What I like the least about this beer was the sweetness, I think it could be toned down a little. I would get this beer again, but it isn't something I'm going to stock up on. I recommend trying this beer if your a fan of Dubbels, I think it's worth a try. All in all I was happy with this beer, it was just what I wanted out of the style and I enjoyed it. IT's not my favorite Vivant beer, but it's one of the better American made Dubbels I've had. Nice job guys, this is a tasty Dubbel.

Rated by gabrielsyme from Virginia

3.26/5  rDev -15.3%
look: 4 | smell: 3 | taste: 3 | feel: 4 | overall: 3.5
Undated can at 40 degrees into tulip; allowed to warm to 50 degrees
$ 3.29/16 oz can at the Lager Mill
Aroma initially “dark fruit”, but weak and doesn’t last
Head – none. Initially a one cm light brown fizzy head which is gone by the end of the aggressive pour.
Lacing – none
Body dark reddish brown (Brewery describes as “mahogany”), clear, some effervescence
Flavor starts slightly sweet, nondescript, no particular flavors – just sweet and kind of hopeful that a distinguishable flavor will appear – maybe they’re just too subtle or too well blended for my gross taste buds.
Palate medium, creamy, lively carbonation

Reviewed by DrainBamage from Michigan

Reviewed by GRPunk from Michigan

A- the body is a clean, dark brown with some reddish hues at the edges. It poured a thin, khaki head that quickly drops to a light film. There's moderate-heavy carbonation evident. Very light stick left on the glass.

S- Very rich. A combination of raisin, cocoa powder, green apple peel. A little ash. Somewhat wine-like. A little leather later on. It opens up even more with some warmth, amplifying the feel of a nice sipping libation worthy of a big chair in some highfalutin study.

T- equally bold. Woody with raisin and a sweet component (a little caramel, some light chocolate). A smoky, ash-like flavor I get from a lot of Vivant beers. I generally attribute it to the house yeast, and it sometimes gets in the way. It really works here.

O- A really pleasant beer. Bold flavors without overwhelming. A relatively easy drinker for being so flavorful. A little spendy to enjoy on the regular. Otherwise, I'd be all over this one.

Reviewed by justinp444 from Michigan

T - The taste is Belgian yeast, plums, figs, grapes, toasted malts, and some light toffee. The finish has a faint bitterness.

O - This drinks more like a Belgian style brown than a Dubbel. Decent beer, but lacking in flavor depth.