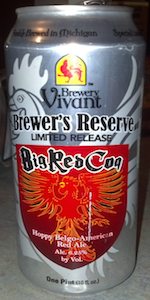 I found this beer to be flavorful, hearty and so well-balanced. Pours a nice reddish-orange color with lots of creamy whit fluffy head and some great looking rings of lingering lacing. Almost sheets of lacing. Smells of some muddled citrus and floral hops, a little pine, malt, caramel and bread. Taste follows the nose, and man oh man is that sweeter malt backbone so well balanced with the hoppy bitterness. Just so well done. Smooth, mild mouthfeel, just a little bit sticky, and good carbonation. A great offering from a solid local brewery.

I had this back in 2014 at the brewery, I was in the neighborhood for a 10 year reunion.

Pours red. Big surprise in a review for a red ale, I know. Racks up a sizeable 4/5" off white head, good staying power. Wow, the aroma was hoppier than expected. Comes right out like I dunno, Pataskala or Loakal Red in that its a hoppy red and it kicks down something other than C hop grapefruit bitterness. There's a medley of fruit nose smells to this one. Plus red malt. Plus a belgian like yeast presence. Lots to take in.

Taste, similarly, this has lots of hops in the taste. Even with the red ale quantity of malt contribution, this is still leaning on the hoppy side of things. The yeast is giving it a different direction, but thankfully, is the lesser of these three not evils. Some caramel notes. There is a lot going on. A little bit belgian, a little bit step dad red malt, a little bit hop medley of classic and proprietary hops. I like it.

The aroma is a mix of earthy spice a tropical fruit. It has a hazy brown with a hint of amber. The head is a slight tan color that starts thick and is reluctant to fade away. Bold malt-like bitterness, has a roasted malt taste with a hint of sweetness.

Clear garnet, nice off-white head with decent retention, nice lace
Hints of banana and bubblegum from the yeast mingle with tropical and citrusy hop aromas. Sweet malt in the background
Malt definitely drives the flavor- toasted bread, caramel, some dark fruit flavors. Citrusy hops and yeast fruitiness are in the background
A touch to sticky for me, but not obscenely so
Pretty decent red ale

A bit too hoppy for me, tastes like an IPA. I have to be in the right mood to enjoy an IPA. Still, I thought it was decent for a hop heavy ale and if you are a fan of IPAs, I recommend it.

A - Hazy amber color with thick and creamy off white head with steady carbonation.

S - Citrus and caramel malt. Smells like a home brew.

T - Citrus and some light malt.

O - This reminds me of a home brewed beer. Not a bad thing because I home brew.

A: A murky brown in color with a fairly large light tan, that looks fluffy with a couple of craters.

T: Big hops. Citrus is dominant with grapefruit and orange peel leading the way. Light bread, and a spice character as well as a touch of Belgian yeast character

M: Medium in body with very active carbonation, and a somewhat dry finish.

O: Overall a very enjoyable brew. I wish I got a little more from the grains, but the combination of hops, and yeast work well.

Poured into a tulip, the appearance was a dark red/brown sort of color with a light tan to off white foamy/semi-fizzy head. Light stringy to bubbly lace. The aroma had some tropical fruit, some pine, dry funky sort of grassy edge and then gets yeasty as it warms. The flavor was somewhat sweet with a touch of the bitter, the tart and funky maltiness. Grassy edges come in to bump the balance into a slight earthy malty backbone. Crisp grassy hops and funk hit the aftertaste and ride on into the finish. On the palate, this one sat about a light to medium on the body with a fair sessionability about it. Moderate carbonation. ABV felt appropriate. Overall, leans more towards a Belgian IPA to me. Still, I could come back to.

My favorite beer from vivant that is not a sour.
Color: Deep reddish amber. somewhat of a orange tint too. Very clear.
Smell: solid hoppiness and some floral as well.
Taste: Solid bitterness and you can taste the same hop smells. Very drinkable though and smooth as well as crisp.

This was a very good beer. It's dark golden yellow in color, almost red. It starts off very fruity and mellows out throughout the rest of the beer to be a nice malty drink.

This beer had a distinctly fruity and almost sour aroma.

It has a dark golden color.

The taste is similar to the smell. Different citrus notes comes through as well as fruits such as green apples and pears.

If you're a fan of traditional IPAs I would suggest trying this one.

Favorite beer I've tried from this brewery. Perfect mix of hops and malt for a red or amber. Most Ambers I've tried are too malty for me. If you enjoy IPAs, but want something a little different this is a great one.

This was a very interesting beer. It was my first taste of a red ale. First instinct while smelling aromas was herbal and earthy with a nice hop flavor in it. Very interesting with a nice malt touch. Thought it would taste similar to an IPA and it did but it had unique flavors. Taste is a very balanced flavor with a bit more of a hoppy character. Overall the beer was good and I will definitely be drinking again when I can find it.

It has clear rusty/orange color, which looks a little weird to me. You can smell the bitterness and it tastes very hoppy with fruit aroma, especially mango. It has a dry hoppy finishing.

Appeared a very bronze color with a somewhat sour scent. Taste was very hoppy with some darker malt and a bit of an oaky flavor. A nice beer but not my favorite of Vivant's.

Poured as a clear red/rust, with a sharp hops aroma along with some funk. The taste is hoppy with some malt sweetness. The beer gets better as it warms. A nice beer.

Poured into a teku pint. No freshness date.

A- Pours a reddish dark amber color with a full inch of light tan head that retains well before becoming a thick ring around the edge of the glass and a mostly full sheet of surface foam. Semi-resilient lacing leaves small clots behind.

T- Balanced flavor of toasty malt and mild hops. Bitterness is on the lower end of the spectrum. Pretty drinkable, though there's a bit of a noticeable alcohol taste that's not so pleasant.

M- Pretty soft for a hoppy red with medium carbonation and a body leaning toward the lighter side.

O- No noticeable flaws overall, but just not particularly interesting.

Aroma is very estery, with notes of pear, green apple, and clove dominating. This was canned in March, so... Maybe some citrus, resin.

Flavor is citrusy, resiny throughout, with hints of pear and apple upfront that fade to a very dry, powdery, lightly bitter finish. Specialty malt fruitiness is concealed, which I like.

This is an interesting beer. I enjoyed the tropical fruit flavor hints mixed with the hops and grassy flavors. The color is amber and clear with a light tan head. Aroma is sweet and malty. I enjoyed this beer overall.

This is one of my favorite beers from Brewery Vivant. This has very unexpected fruity notes, seeing as the can is very masculine. This beer has a deep amber color with touches of red. There is fruit on the nose, almost pineapple flavors. On the tongue you can taste mango, citrus, and other tropical fruits.

The color is a brownish red and amber. It has a pleasant fruity smell, with hints of pine and citrus. The taste is of clove, malt, and has a few spiced notes. The texture is of a dryer malt and is smooth. I really enjoyed this beer.

What's not to love about a beer named Bog Red Coq? With a strong combination of hops, citrus and spices this beer was a little surprising to taste at first. But after the first few, I realized this was a beer that I could drink a few of.

If you are ever in the Chicagoland and CAN get to one of their locations, Binney's Liquors remains a CANQuest (TM) source nonpareil! This was a score from my most recent visit.

From the CAN: "Belgian tradition. Local mission."; "Hoppy Belgo-Ameri[CAN] Red Ale"; "WHY USE CANS? We set out to build a sustainable brewery and found through our research that cans are a better option than bottles. Cans are much lighter in weight, contain more recycled content, are able to be up-cycled, and use less energy to produce. The canning line also has a much smaller footprint than a bottling line. If this was not enough, cans provide better protection from flavor degenerating oxygen and hop flavor robbing sunlight. This is the best package we can provide to bring our beer to you, tasting the way the brewer intended it. Enjoy."; "HOPPY BELGO-AMERICAN] RED ALE The beer was named after the red rooster that adorns our brewery's logo, so wipe that grin off your face. What started as a one-off brew at the pub has become one of our most sought after beers. The deep red hue comes from the special malts we use and give the beer the backbone it needs to stand up to the excessive hop charges the brewers throw in. Citra hops give this beer the mango, tropical fruit, citrusy goodness that we love."; "COMPLIMENTARY FOODS Sharp cheddar or aged gouda cheese. Spicy food like Creole."; "GLASSWARE Large Tulip or Snifter properly captures the hop aromas which are a big part of enjoying this beer."

The Crack! was nice & loud, but the fact that it was a One Pint CAN meant that I CANducted a gentle Glug so as to keep things under CANtrol. That was a wash since there was an abundance of carbonation which formed three-plus fingers of dense, rocky, tawny head with great retention, leaving loads of sticky lacing in its wake as it fell. Color was Deep Amber/Light Copper to Copper (SRM = > 13, < 17) with NE-quality clarity. Nose held an interesting mix of "the mango, tropical fruit, citrusy" scents that they mentioned, but also a pine sappiness. My mouth was watering unCANtrollably. Mouthfeel was medium, but kind of prickly from all of the carbonation mentioned previously. The taste was quite fruity, very tropical, especially with mango, papaya and pineapple, but still with an underlying pine flavor. This makes me very happy after so many non-hoppy beers lately. Finish was dry, but not really bitter. The malts leant more of a biscuity, toasted breadiness than a sweetness. I would drink this more often if it were readily available.