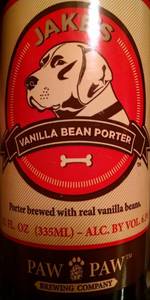 Pours black/dark brown, brown head 1/5". Aroma was mild in terms of roasted malt and vanilla. Nothing off, just pretty muted.

Taste is fine, its got a decently smooth mouth feel, even if the vanilla doesn't amount to much in the sensory areas of aroma/taste, it does seem to provide a smoother beer, but that also could be from the lower roasting/heft of the malt, maybe more chocolate malt than something black patent or higher roasting/scorching. Lacks some of the hopping/bitterness that American Porters tend to be distinguished by.

All in all, its a good beer. No off flavors. When spring starts to warm up, its nice to kind of have a few beers of this nature and strength around to start the day off before it gets too hot for porters.

Reviewed by Big_Neezy from Michigan

2.87/5  rDev -23.1%
look: 3.5 | smell: 2.75 | taste: 2.75 | feel: 3 | overall: 3
With almost every brewery in Michigan producing at least two porters, Jake's falls deep towards the back of the back particularly in the vanilla porter category. In general, this beer is lacking but perhaps a start towards something better in development. Right now though, it's the C/C- student in the class.

First impressions are decent as it pours a rich, black color. You get hints of that vanilla bean but it's faint, too faint. I'm a huge fan of the use of vanilla bean versus extract in porters but I want to smell and taste it. In fact, the whole beer is like that in that nothing really stands out and it ends up a pretty standard porter in most respects.

Reviewed by GRPunk from Michigan

A- A normal pour creates 1 finger of light brown head. The body is very dark brown, near black. The head keeps to a medium film and leaves awesome rings.

T- Pretty flavorful. Roasted and charred malts with light vanilla sweetness. Hopping is lighter, but comes across in the end as slightly minty.

O- It's a really solid porter. With vanilla on the lighter side, it's an easy drinker, but it doesn't set itself apart. I might not choose it over an Edmund Fitz, Bell's, or Founders, but it's not too far off.

A- The label looks good and it goes well with the info on the side, it's a little eye catching. It poured a nice black color that takes on a slight brown hue when held to the light with a fingers worth of tan head that died down to a thin ring that stayed till the end and it left some patchy lacing behind. This is a pretty nice looking beer, I have no complaints.

S- The aroma starts off with a lower amount of medium sweetness with the dark malts being the first to show up and there's a noticeable and weird black olive aroma coming through. Up next comes some light chocolate and light sweet malt aromas followed by the vanilla bean which is noticeable and not too overpowering. This beer has a nice aroma, but I could go without the light black olive like aroma.


T- The taste seems to be fairly similar to the aroma and it starts off with a lower amount of sweetness with the malts still showing up first and they impart the same aspects, but this time there's more grainy flavors with less chocolate coming through and it tastes a little watery. Up next comes a slight bit of doughy yeast that leads into the vanilla which is a lighter than it was in the aroma and it shows up a little more on the finish with a medium amount of bitterness with some lingers grainy malt and light chocolate flavors. The taste was nice, but I wish it didn't taste a little watery and I would the chocolate and vanilla to show up more.

M- Smooth, a little crisp, not too creamy, on the slightly lighter side of being medium bodied with a medium amount of carbonation. The mouthfeel was nice, but i wish it was just a little thicker and creamier.

Overall I thought this was a decent beer and I thought it was pretty close to being an average example of the style, it wasn't bad, but nothing stuck out about it and it just wasn't memorable. This beer has ok drinkability, one is enough for me, I don't really have the urge to drink another one. What I like the most about this beer was was the appearance, it was pretty nice and it was the highlight of this beer. What I liked the liked the least about this beer was the balance and the watery finish, those two aspects could use some work. I wouldn't buy this beer again, I would much rather have an Atwater VJ Porter and I can't say I would recommend it. All in all this wasn't a bad beer, but it wasn't anything that I was really into and in the end it just seemed rough around the edges. It's not a favorite Paw Paw beer and it's average for the style. Better luck next time guys, this could use a little bit of work.

Reviewed by Clockwork420 from Missouri

Huge depth. Starts off sweet and inviting and changes into a smokey but delicious brew. Coffee and chocolate notes with just a hint of vanilla. Bit malty taste. Good balance.

Mouthfeel is medium thin. With lower carbonation. Balanced and appealing. No burps.

Overall, a very balanced brew. A lot it happening in it. Everything blends together and makes it somehow work properly, as some beers tend to over it and make one feature over power the other notes. Smoke, vanilla, coffee, chocolate. Drinkability is fairly high. Would recommend.