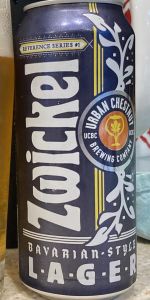 Notes: Our flagship lager, pronounced ‘zv-ick-el’, is an unfiltered, unpasteurized, German classic that finishes as a smooth-drinking, vitamin rich (from the yeast), naturally cloudy bier.

Lemon bread & fresh flower flavors. This was quite tasty!

In May, 1975 I made my first visit to Hofbrau Haus in Munich and had the smoothest lager I had up to that time in my short adulthood. Forty some years later I was apprised of UCBC two locations in St. Louis. In their great beer hall they have up to 32 styles of beer in two categories: Reverence Series and Revolution Series. The latter is a playground for brewers to experiment, the former tradition styles. UCBC beers are available in half liter Arbeiterflasch and 16 oz, cans.
The Zwickel is UCBC's flagship beer. It's a classic lager: hazy golden with creamy head, very nice lacing; it has both pleasant nose and flavor. It compares most favorably with Munich lagers: slightly hoppy, nice malty notes.
If I were told that I could have only one beer of only one style a day for the rest of my life, it would be Urban Chestnut Zwickel!
I like this beer! You should try this bear!

Spicy and perfumy aromas of malt and noble hops.

Now, this is a flavorful and balanced lager with a soft and creamy mouthfeel. The unfiltered nature of this lager imparts some very unique flavors - hints of vanilla and lemon as well as faint banana. It is ever so slightly bready on the palate with a very clean aftertaste.

This is an underrated style that deserved more recognition. It is not hugely distinctive, but it is very refreshing and quaffable. I am glad to see the beers from this brewery now available in Florida.

I picked up a couple of tallboys on a recent road-trip, and have enjoyed each one, but this is the last one, and it is the best, so it must be growing on me. Anyway, into a willibecher, looks nice gold with a good head and good retention...little clearer than I expected, but not crystal clear. Nose is promising: honey malt, graham cracker, pepper and some spice. On the taste, everything here just harmonizes beautifully. Everything in the nose is here, but there are also some herbal hops, and maybe a little slightly more biscuity-bready maltiness in the beginning and middle. Not heavy at all, but full flavors. Slightly dry on the finish, but not crisp. Not sure I was able to pick up on as much of the yeast notes as I usually can on really good lagers, but...this was just a very satisfying and tasty beer.

Thanks to FBarber for this one, from a ninja box as part of NBS BIF #12. 16oz can (dated 20-06-30. I assume that's June 30th here in America) poured into 14oz teku. Poured a lightly cloudy medium yellow color with just over an inch of white head that had good retention and lacing.

The aroma was grain forward bolstered by floral hops.

Similar on the tongue, a classic "beer" profile.

The body was light, crisp and clean, with a dry finish.

Drinkability was very good, an easy crusher for sure.

Overall, a very nice beer. Worth trying if you see it.

A go-to staple for me, this Bavarian lager has a great crisp mouthfeel that is a clean finish.

poured from a 16oz can into a dimpled mug. pours a chill-hazed gold with a almost three fingers of fluffy white foam head. malt, bread / crackers and floral hops on the nose. taste is similar but with a bit more maltiness to it then the nose would lead you to believe. medium-full mouthfeel with the carbonation on the lighter end. it’s not super bubbly; more full and malty. enjoyable Zwickelbier.

Lightly cloudy, golden, pale straw color with a finger’s worth of frothy foam head. Good retention for about 2 minutes, carbonation streams from the bottom of the pint glass. A thin layer is leftover. Minimal sedimentation.

Im new to this style but I really love how everything comes together for a easy drinking lager. Could see this being a go to in the heat as well as spring and fall temps.

Heavy 16 oz bottle. Pours a cloudy and hazy light golden color. I love how it is unfiltered and unpasteurized. Perfect head and nice flavor of yeast, bread and grain. Best American Zwickel I have had.

Poured from can. Cloudy, with little head. Smells of bread. Tastes of bread, good carbonation and a thick mouth feel. Overall, a good german style beer, but nothing too exciting.

One of my all time favorites. Notes of fresh cut grass and dried straw. Clean, bright, and crisp. Excellent served cold on a humid summer afternoon.

From the half liter bottle, it pours a nice light amber with a robust white head. In the nose, it is bready and malty. In the mouth, it is the same. Nice, but it feels more like a Helles.

Appearance: Pours a light, clear, golden color that is actually pretty clear from the top of the can. Once the bottom is poured out its much more hazy. Not hazy by any means. Strong, heavy head that lingers. SRM of 8 (3.75)

Feel: Thick, creamy, and smooth. Heavier-bodied. Moderate carbonation. Such a smooth and clean beer. The strong yeast balances out the heavier mouthful for such a perfect feel and finish.

Overall: Quite a fantastic beer and underrated style. Similar flavor profile to a German Helles, yet the unfiltered yeast provides such a nice roundness to to the concordant heavier body. Body is closer to a hefeweizen. This is the cream soda of a German lager. The yeast really accentuates the graininess to come through. The opposite of crisp. Much prefer it to a Euro lager. An unfiltered wheat, but German style. A great beer and a great style!
*Would compare next to a helles or German Lager*

Hooray for @jkblr who sent me this CAN & others to not only further The CANQuest (tm), but to give me something to do on New Beer Sunday (Week 715)!

From the CAN: "Pronounced ‘zv-ick-el’, the flagship lager of our Reverence Series (classically crafted, timeless, European-style biers) is an unfiltered, unpasteurized, German-style classic that finishes as a smooth-drinking, naturally cloudy bier(from the yeast), Prost!"

My eagle eyes noted that this was one of those CANfounded 360-degree opening CANs in which the entire lid peels away, rather than Crack!ing open. I dislike them since I tend to Glug my beers into an awaiting glass, vice putting my lips in CANtact with metal. They are like a step backwards since the lid then becomes just a metallic shard to be discarded ala the old pull tabs. Grr. Thankfully, Jeff Lebo instructed me on how to bottom-open CANs, which is what I did.

Once I had the vents established, I began what CAN only be described as a Dribble, vice a Glug. It was slow going, but I finally got the CANtents decanted into the awaiting stein. All of this effort resulted in it really foaming up to create just under two fingers of dense, foamy, rocky, eggshell-white head with great retention that left a ton of lacing in its wake. Color was a deeply-hazy/lightly-cloudy Golden-Amber (SRM = > 5, < 7). Nose had a very biscuit-y maltiness. Mmm. Mouthfeel was thin-to-medium, but about on par for any Lager-style bier. The taste was interesting in that it had a pronounced mineral quality to go along with the biscuit maltiness noted on the nose. I have attempted to read the Brewers Publications' "Water" by John J. Palmer and Colin Kaminski on several occasions, but its chemistry is too much for my ken. That said, I live in Lancaster (City & County), PA, an area known for having rich farming soil thanks to sitting on a limestone bedrock. To say that our water is hard would be to put it mildly. It is one of the reasons that local brewers gravitate towards brewing Lagers. I don't often perceive the hardness of water in beer, but in this instance, I certainly did! I really liked everything about its appearance & taste, from the fact that it was neither filtered nor pasteurized to its mineral biscuit semi-sweetness to its making me wish that I had some pretzels to accompany it. Finish was in that nebulous twilight zone between semi-sweet & semi-dry. I would definitely have this again, especially with a pretzel or two & some stone-ground mustard. Mmm.

Poured from 16oz can into glass. The can top is the kind that pulls off the entire lid, allowing for easy can drinking. Canning date is stamped on can bottom as '082118'.
Straw to pale gold colored body. First part of the can pours a clear body, and the last of the can introduces the yeast which induces some cloudiness. Two finger white head settles to fluffy, interrupted cap and high ring. Leaves behind horizontal layers of lacing.
Sharp aroma of yeast and bready malts.
Taste of bready malts, with some sweetness. Next is mildly tart, floral hops, and the bite from the yeast. End of the taste profile is bready lager.
Smooth and crisp mouth experience, with a medium mouth feel. No bitterness but does have the yeast bite in the back half. Aftertaste is general lager like and pleasant.
Quite different for a German style lager, with the multi layers of malts, hops, and yeast. All have distinct flavors but work together to result in an enjoyable taste profile.