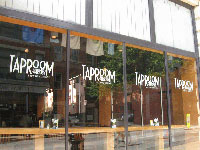 Pretty cool spot, It's kind of looks like a store front but they've converted it into a brewpub/taproom. The selection was pretty good. The food looked good but didn't have any. The service was good, I'd definitely go back in the future. The only downfall is finding parking on the street.

With it's light avocado green walls, beech wood benches, and galvanized buckets full of twigs and branches as a decorative features in the windows you might initially think you've walked into a health food restaurant - but there are the gleaming taps behind the bar! On the upper wall opposite the bar is a brightly painted, but kind of weird mural that depicts the names behind the breweries beers (they have a kind of cartoon-scary theme if you're not familiar). Beneath that there are metal chairs done in matching colors, and they also correspond with the brightly colored umbrellas above their outdoor tables as well. There's also shuffleboard, which is awesome in comparison to the current trend of just throwing some old board games into the corner (believe me, I never need to see another table of college aged nerds playing JINGA again). Finally, a wall of rusting metal leading back to towards the bathrooms and - GASP - a Zoltar machine round out the weird, semi-cohesive decor.

There are 8 beers on tap, all from Spring House, and in my opinion, they're basically regular beers with an occasional oddity thrown in - you won't be finding one-off specials or barrel-aged beers here. On the other hand they've got some decent stouts and IPAs, and there are 8 so you've got a fair amount to choose from.

Overall I'd call it a decent stop for a beer whether it's for lunch, after work, or later at night - although it will be crowded.

I had a delicious mint stout and a delicious peanut butter stout here. These varieties of stouts have eluded me ever since, aside from Stone's Collab Mint Chocolate Stout (which was phenomenal), and a Peanut Butter porter I had recently. I don't know if they carry these year-round but I really want to try them again. The taproom was located around lots of other establishments in downtown Lancaster and I love the cobblestone walkways in town. I wish I'd spent more time here. They have a shuffleboard, which is neat. Their craft beer choices were solid too. If I'm ever in Lancaster again, I'll be coming back here without a doubt.

Taproom is a must stop if you would like to enjoy a great stout, or even their seven gates ipa. Typically I have good service, but I have hit some off nights as well when it gets packed. In the summer its always nice to enjoy your beer and maybe some food outside, though it is limited to only a few tables. The food is also good, but kinda limited. You have some appetizers as well as sub's and pizza. The prices are a little high for the quantity, but that's where quality comes into play. You can also pick up a bomber to take home with you or share with a friend, or even some Spring House merchandise.