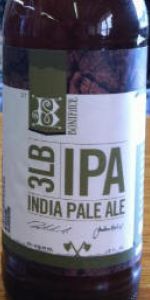 Notes: 3LB IPA was originally named for the 3 pounds of cascade hops that we put in every barrel. This well balanced IPA gives the drinker a powerful hop experience while maintaining a malty sweetness which allows the uninitiated to appreciate its grapefruit characteristics. We trust you will find 3 lb. a pleasurable way to consume hops.
View: Beers | Place Reviews
Reviews: 20 | Ratings: 91 | Log in to view all ratings and sort
Reviews by ogman:

St. Boniface is my most local brewery so after alot of ratings I think its fitting that my first review is my favorite beer from St. Boniface. On to the beer,
Pours a copper color with a thick soapy white head. The smell is my favorite part of this beer. It smells of fresh hops and a little of sweet malts. The taste is clean ipa, nothing fancy just exactly what you want from a good ipa. Overall the beer hits on all of my marks for a solid ipa and thats why im a often customer of the brew pub.

Aroma - Slight citrus aroma, hint of pine and malts. Slightly bready with a touch of spice.

Feel - Medium body, not as dry or bitter as expected. Slightly slick.

Decanted from a 12 oz (355 ml) can into a conical pint glass; canned on 02/20/18.
A: Pours a hazy orange-amber color with dramatic head formation. Almost a full head of foam after perhaps the first one ounce pour, but ultimately leaves only a quarter inch, orange chiffon head with spotty lacing.
S: Aromas of orange chiffon, caramel, tangerine, and toffee predominate.
T: Semisweet and fruity. Palate largely follows the nose, but with the addition of a cocoa note. Moderate to strong bitterness very nicely complements the sweetness and fruitiness.
M: Medium bodied with moderate effervescence after decanting. Juicy.
O: Enjoyable and very drinkable. Could see it as a slightly boozier an alternate to summer shandies.

Poured into a becher pint glass, the appearance was a semi-murky gliding sort of dark bronzed yellow to copper sort of color with a finger's worth of white foamy head that slid off fairly quick. Not much lace.
The aroma had some hop spice (which seemed like white pepper) playing with some pine and super light citrusy content. Caramel/toffee malts pushed forward as it warmed.
The flavor was somewhat sweet with a decent bitter backing coming all up in there as it warmed. Mild aftertaste taking the malts and throwing against the piney and citrusy hops fairly nice.
The mouthfeel was about medium bodied with a pretty good sessionability about it. Carbonation felt fine. ABV felt fine. Mild syrupy semi-sticky sort of feel.
Overall, pretty good AIPA that I could have again.

It has a light color and is fairly clear. The head was far larger than expected, but not lots of lacing on the glass. Very strong citrus smell, almost overpowering anything else that comes through. Very inoffensive in taste however, very muted notes of damp earth and citrus are very forward, personally not finding the bitterness as present as others have described. Pretty decent IPA all things considered.

Notes via stream of consciousness: Pours a hazy golden color - ugh! until I hit the yeast! - then it became a cloudy mess. Now it's a deep amber/copper in color beneath a rocky head of off-white. That's one of the problems with cans, you can't see sediment. Still, I prefer cans to bottles. All that yeast changes the flavor of the beer though. Does it say unfiltered anywhere on the can? No. Oh well. Yeasty caramelish malt and citrusy hops in the aroma. It's not bad but I'd imagine the hops would come through clearer without the yeast interfering. It says something about 3 pounds of Cascade hops per barrel on the label but that's really not that much. Moving forward, let's look at the flavor. Nice. Pleasant blend of caramelish malt and hops. Bready, and nutty, probably from the yeast. The caramel is right at the perfect point, just beyond golden caramel and not quite into dark caramel, what I think of when I'm looking at actual caramel as 'reddish'. The citrus is minor, and rather than finding the expected grapefruit I'm getting more of a hint of lemon amidst light dried apricot and very soft tangerine. It works, but I'm now wondering what this beer is really like, without all of the extra yeast. I might have to go out there. I've never seen it on tap. Let me check real quick. Wow, they're not even listed on Phillytapfinder.com so I guess I'm not wrong. No problem, they're between Adamstown and Lancaster so there's a good beer trip in that. Back to the beer, I'm about halfway through now and enjoying it. Very nice lacing left behind in the glass - I'll rate it as if it had been clearer, I should have poured it more carefully. It's got a good balance to it. It's bitter, but not too bitter, and not at all harsh. The sweetish malt and bitterness seem to slump into each other. The citrus lingers a bit in the finish. Although it's American I find it kind of English in nature, at least with the yeast included. It reminds me of a pint I had from a newish microbrewery in Liverpool a few years ago at the Lion before they closed. Haha! I just noticed that the can reads "NICHT LANG SCHNACKEN, KOPF IN NACKEN!" - "STOP TALKING, START DRINKING!" so I'll shut up.

It has been a nice Thanksgiving 2016, providing me the opportunity, albeit brief, to return to The CANQuest (tm). Tomorrow, it is back to work and back to the eradication of the Bottle Backlog here at Chez Woody, but for today, it's CANs, man!

From the CAN: "Nicht Lang Schnacken, Kopf In Nacken! [(] Stop Talking, Start Drinking![)]"; "Convert the Masses"; "Originally named for the 3 pounds of [C]ascade hops in every barrel, this well-balanced IPA is a powerful hop experience that maintains a malty sweetness, highlighting its grapefruit characteristics. We trust that you'll find 3LB an enjoyable way to consume hops. [undersigned, the brewery team]"

I just love hearing the Crack! but my glass was too small to allow for an inverted Glug. Even so, I still managed to bring the head right up to the lip of the glass and then some. It became two-plus fingers of dense, foamy, French Vanilla-colored head with excellent retention. Color was a solid Amber (SRM = > 7, < 9) with NE-quality clarity. Nose was redolent with grapefruit underlain with a caramel malt sweetness. Mouthfeel was medium, The taste reminded me to forget about malt and be thankful for grapefruit! Phew. This will get your attention. I am sure that some will complain that it is imbalanced, but I am not going to be among them. I am a self-avowed hophead & I enjoy this sort of thing. Finish was dry, bitter and I would have it no other way.

Poured into a half pint glass: color gold, hazy in the middle a little clear on the edges, head is off white with fine to small bubbles presenting about 1/2 inch thick, good lacing on the glass sides.

Smell is blend of hop and light toasted and caramel malt, a bit muddled.

Taste is light toasted and caramel malt, hops are blend with lemon and herbal notes.

Mouthfeel is crisp, moderate carbonation, lingering bitterness but not distracting.

Overall a beer that fits the ipa style but a bit muddled with hop blend and neutral to semi-sweet malt.

Another solid, fresh as hell IPA from Boniface.

12 oz bottle purchased at the brewery. Served in a who cares (take that drabmuh).

Pours a cloudy dark amber color with a soft golden hue against light. Retentive, finger thick cream colored head and some specks of lace. Malt forward nose, biscuity and bready with a light citrus hop finish and some lingering sweetness. Flavor is still malt forward, but has a stronger hop presence than the nose suggests. Bready malt dominates and a mild citrus sweetness tries to balance it out. Full body, with medium carbonation. Not a great AIPA, but if this was supposed to be a hoppy amber I'd be more satisfied.