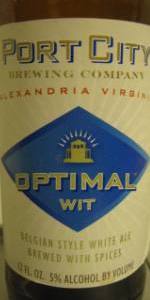 Abundantly flavorful! Straw-colored brew, white foamy head with staying power. Was surprised how in-your-face the flavor was--coriander and orange peel come through beautifully. At first I thought "maybe too much?", but no. This is a full-flavored wit that rivals some of the European wits I've tasted. Well done, Port City.

Bought at the Beer Table in Grand Central Station and drank in its Food Hall.
Looks slightly above average with active protein, but foam faded surprisingly fast.
Smells are a mixed malt bill eventually pushed back by the citrus and spices.
Tastes are balanced, refreshing.
In my mouth, Feel is medium and bubbly enough, yet soft like wheat... particularly on this hot, muggy day in New York's Dog Days.... Gets me ready for the subway.

Optimal Wit is one of Port City's cash cows. And for good reason, it does its job. It's refreshing, balanced and reasonably priced. Port City claims to be the DC metro's first crafter, founded in 2011. If so, it has brought brewing culture to the nation's capital. And for that, it deserves very good OA Hugs.

Poured from a can into a pint glass
Appearance – The beer pours a lightly hazed straw color with a one finger head of white foam. The head has a good level of retention, with it slowly fading over time to leave a light level of foamy lace on the sides of the glass.
Smell – The aroma of the brew is strong of a bready and doughy aroma, mixed with lots of yeast. Along with these smells comes notes of banana and lemon as well as a big aroma of clove and coriander. Overall, the aroma is rather inviting.
Taste – The taste begins with a mix of a bready and cracker malt flavor that is paired with some yeast and a good deal of a sweet banana and citrus flavor. As the taste advances spice flavors of coriander and clove get stronger and stronger, all while the sweetness ups a bit as well. A subtle, confectioners’ sugar like taste comes to the tongue at the end, and with a touch of hay, one is left with a nice, moderately sweet and spiced, wit taste to linger on the tongue.
Mouthfeel – The body of the brew is medium in thickness and creaminess with a carbonation level that is average. For the bready, sweet, and spice the feel is rather nice allows for a nice balance of flavor appreciation and easy drinking nature.
Overall – A tasty and nice wit. Flavorful and very drinkable. Great for a warm summer day!

Pours a pale straw but a little dark or redder than some of your pilsners and saisons. The nose is faint some bubblegum, banana, and clove. The underwhelmingness carries through with each sip - faint banana and clove. The mouthfeel is thin, which I guess some folks might like, but I found perpetuated the "lightness." When you compare this beer to a Hoegaarden or Allagash White, you will be underwhelmed as was the case with me. If I'm trying to find a tasting memory, I think it reminds me of Spotted Cow or one of the underwhelming saisons I had at a just opened Foam (Burlington, VT). This just doesn't do it for me.

April 9th, 2016 - This is a faint, almost ghostly beer, with just a slight hint of popcorn and vanilla ice cream on the nose. It's a curious combination, and might be a result of some off-flavors, but it's not so off putting that I don't try a taste. The flavor is lighter than expected (even controlling for the style) with a lighter carbonation. While the taste is a bit bland, the somewhat flatter body is more unforgivable.

Year old bottle from the work cooler, so take this review with a grain of salt. Was refrigerated the entire time.
Pours a clear straw with a thin white head that dissipates quickly, some streaks of lace.
Smells like doughy malt with a hint of banana and coriander.
Doughy malt, some banana and a hint of coriander. More like a hefeweizen than a wit.
Fluffy mouthfeel, dry, but lacking the spritziness I expect from a wit.
Not really my style in the first place, but age definitely hasn't helped.

Appearance:
A ghostly-pale, white gold liquid that lurks beneath a frothy ocean of white foam. Its cloudy translucence gives it an otherworldly, ethereal quality. When the head vanishes, it leaves strands of webbed lacing in its wake.

Taste:
A witbier that's as woefully weak as a paltry pilsner. Pale grains and wheat biscuit come across hollow, if not altogether unpleasant, with a dash of lemon pepper that's easier to miss than the number 57 on a Heinz Ketchup bottle. Not bad, just unimpressive.

Overall:
It's about as exciting as getting a tetanus shot.

Feel is on target for style but I wish it had a bit more body.

I've spent quite a bit of time in Alexandria in the past six months and have resisted trying this one. Maybe because it's absolutely everywhere around here. Anyway, I finally gave it a go and I'm glad I did. Redolent of lemon and coriander, with nice wheat notes and a smooth, semi full feel. Quite worth a pick up or two.

From the bottle, it pours a light hazy amber with a modest white head that lasts and leaves lacing. In the nose, it is a touch of yeast and a bit of, er, bubble gum. In the mouth, it is light and refreshing. Nice!

Picked this up at the LCBO on a whim, as the few American microbrews they do carry are usually good.

T : Flavour is not very strong - almost pilsner like. Quite weak, even a little watery. Hints of pepper towards the back of the mouth.

F: heavy on the carbonation, too much so. Once the roughness of the bubbles subsides, it goes down smoothly.

O: could take it or leave it. Would not buy this one again.

Appearance - Super pale, super clear golden color. A finger and a half of egg shell white coloured foam rests on top. Above average spidery lacing and nice bubbling action from within.

Smell - Coriander and oranges mostly, lots of wheat. Some clove and a slight bit of banana and bubblegum sweetness, showing more depth than many.

Taste - Wheat, robust orange and coriander. The citrus balances things nicely here. Less banana and bubblegum than on the the nose.

Mouthfeel - Easy drinking beer, super smooth and would be particularly good on a hot day.

Overall - It's not St. Bernardus, but Optimal Wit, is very solid and scores well across the board, making it a beer I would return to if it appeared again in some warmer weather.

Look is quite average for the style, almost no head, which disappointed.

Smell is right on target for the style. Cloves, bananas, bubblegum and spices.

Taste is led by the bubblegum and candi, then you get some nice light spices.

Feel is light bodied with low medium carbonation. Finish is fruity and lingering.

Not a bad Wit, but it isn't one that wows me. I think I'd rather have a St Bernardus Wit any day of the week...and it costs about the same around here.

Smell: Same as below.

Funky, yeasty, bready, malty, yellow, and frothy four-finger head, are descriptors you don't want to hear come out of the mouth of an ob/gyn, but are optimal words for a Witbier. Indeed aptly named, Optimal wit checks all the marks for a delicious witbier.

Crisp carbonation. Succulent and a bit juicy, evoking pear and lemon. Crackery dryness toward the finish cuts the juiciness short. Crackery malts and wheat compete for domination maltwise, but it lacks the fresh wheat flavour observed in the best expressions of the style.

Belgian yeast is indicated via clove esters and biscuity flavour, but it lacks the depth and delicate yeast flavour of, say, Allagash White.

Drinkable but underwhelming. Not a terrific expression of a Belgian witbier, but enjoyable for what it is and preferable to Hoegaarden. It ain't so "optimal" after all, but it's above the norm.

Appearance: The body is a very light straw color and it has a moderate haze to it. The head is short and white with good retention and moderate lacing. The surface of the head is very smooth.

Aroma: I am getting a bit of coriander and just a touch of a "tangy" aroma that isn't quite citrus. It smells good.

Taste: It starts out with a wonderful coriander flavor paired in equal parts to a delicious wheat flavor. There is just a touch of a tartness to the beer which livens it up nicely. It is very well made.

Mouthfeel: It is light in the mouth but with texture. It has a nice bubbly carbonation that accentuates a great tartness in the beer.

Overall: It is an outstanding Witbier that focuses on delivering the flavors of coriander and orange peel. If you enjoy a spicier Witbier then this is definitely for you. It is very well made and at just over a month in the bottle it still tastes very fresh. I would drink it again and I would recommend it.

Pours a hazy yellow color with a white head that dissipated quickly. Smells of cloves, wheat, and lemon. Tastes of wheat and banana, with a light spicy flavor like cloves and white pepper. Lighter body beer with a dry, clean finish. Easy drinker with a nice flavor to it. Just about right for a nice summer day or early autumn weather.

On tap at brewery (revisit can at 4 weeks old):
Ok, far from the first time I've had this, but always before this in bottles.

Pours a hazy yellow, white a nice white head that could be a tad thicker initially, though sustaining head is thick at the edges and give a smattering of lacing.
(can: nice initial head, but nothing grand. sustainability is nice, though, light lacing)

Nose is a classic witbier, wheat with a little banana, with a bit of spice accenting the base. A little hint of lemon also gets in there.
(can: about the same, a little more earthiness in the spice)

Taste follows, with the wheat being an obvious taste early as the bass, while a light tartness plays the melody. Banana notes come as the two octaves come together to crest into a nice, light spiced (clove and pepper) ale. Lingering notes have a hint of yeast to them.
(can: not much different at all, though I notice it's leaning a just a little more sweet than I've noticed before)

(can: feel is medium carbonation but with a nice softness overall, making it easy to take a refreshing pull and enjoy the flavors)

Pretty solid, but maybe a bit nuanced. Low rating for a GABF winning beer, even given my adjustments for style. I think maybe it's a bit more "mass appealing," but that doesn't hurt the beer really.
(can: a little more straightforward as a nice, slightly malty, easy drinking beer that has enough going on to be more than just a "thirst quencher")

Poured from a bottle into a pint glass. Looks nice in the glass... straw colour. Opaque turbidity. Aroma of Spice, coriander and herbs. A little yeast Character.. typical for the style.