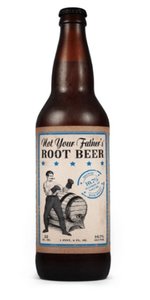 On tap at some joint outside Schaumberg.

It's a more alcoholic, and sweet, version of their lower ABV rootbeer. Same cloying sweetness, same pretty good spice profile, only with a little bit of a booze burn on the finish.

I really don't know what to make of these guys. They're doing a better job of making alcoholic rootbeers than Sam Adams or Sprecher, so that's worth something. But I brewed enough to realize 1)that I suck at brewing, and 2) it's relatively easy for a not that great a brewer to make a decent brew if they're willing to go eXtreme. And this is the eXtreme-iest beer-like product I ever did quaff. So much so that I do not think it should be categorically considered beer. There's still some amount of craft here, and it's okay to appreciate that, but there was a craft to Zima that set it apart from Smirfnoff Ice and Skyy Blue (seriously, not kidding, it was way better than those). I don't mean that as an insult--I actually liked Zima, for what it was--but I think we're getting into weird territory in reviewing this as beer.

Does that mean it's bad? No. But viewed as a beer, by beer standards, it falls short. It's far too sweet. It's not complex beyond it's rather simple SWEET + BURN formula. By all means, drink it and enjoy it, but it's not good by beer standards.

Taste - Sweet. Lots of spices. It's root beer. A little malty in the back. Lots and lots of vanilla.

Overall - It's loaded with vanilla. It's just root beer with alcohol. Way too sweet for me.

On tap at World of Beer - Naperville, IL
A - dark brown-mahogany body with zero head
S - root beer
T - tastes like root beer initially; vanilla and spicy, very sweet, but the spices ride out the finish a bit more than I'd like. It's a bit odd; it might be the heavy alcohol with the spices combination that's not working for me
M - full body, lower carbonation, spicy finish
O - overly sweet, very boozy, not particularly what I want to drink when I want a beer. It is good for what it is, but I doubt I'd get it again.

I thought I would hate this, but l loved it. It tastes like the best root beer ever, well crafted, artisanal, with all the right spices... but it is a beer. A 10% beer.

A: The alcohol is noticeable from the pour as this pours much more viscous and heavier than the original. The head is not as soda-like and fizzy either. Wispy lace was left down the glass.
S: Vanilla and cola-like notes dominate the nose along with hints of licorice, sarsaparilla, and volatile booze.
T: Rough booze up front followed by root beer flavors, mostly vanilla, sarsaparilla, and caramel. I get a touch of wood, mint, and licorice, and the finish is full of spices. Tastes a bit like if you add vodka to root beer. It’s not as sweet as the original, but it’s also not as smooth or enjoyable. The aftertaste is blend of sickly caramel and medicinal flavors. Actually I’m getting the medicinal note throughout the entire flavor. Definitely more beer-like overall.
M: Viscous and syrupy body is similar to that of root beer except with a heavy alcoholic slickness. Carbonation is toned down too from the booze; definitely not as soda-like as the original. The alcohol is “hot” at first, but it is rough around the edges and distracting. As the beer warms, the booze has a warming finish and becomes a chore to drink.
O: If you like the six-pack version, don’t buy this. As a beer, it’s pretty rough. As an alcoholic root beer, just go get some vodka and make your own.

Had this on tap in Chicago last spring. Incredible root beer flavor-couldn't tell it was anything other than root beer. Very sweet, and a heavy hitter if you're not careful.

I have severely mixed feelings about this beverage. It's delicious. It certainly tastes just like root beer. But, perhaps too much so. To be honest, it tastes like they brewed the most flavorless beer possible, then just added root beer syrup to it. Or as they admit on the label "vanilla extract, natural and artificial flavors, and caramel coloring".

I'm not opposed to brewing with adjuncts, but this might as well just be a can of soda with a shot of vodka added. And, yes, I'm dinging it on appearance for using artificial coloring.

I love this beer so much! This one is so much better then the 6% also. The taste is not as sweet as the 6% which makes it more drinkable and balanced.

This is just root beer

I have to use 250 characters to describe it, so here goes nothing.

Thought this version woild be less cloying than the 5%. Nope. Sweet root beer and big vanilla aroma precedes a sweet medical root and spice flavor with a healthy dose of vanilla. Keep it cold, and less than halfway through the bottle you don't notice the medicinal flavors so much. Eh, I can see why some people like it.

Very Dangerous, taste like a delicious Root beer! But Oh yeah it's 10%