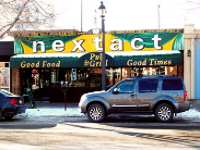 View: Place Reviews
Reviews: 2 | Ratings: 4 | Log in to view all ratings and sort
Reviews by Beervana:

Only really go here for the Alley Kat Cask Night.

It is generally more of an eating place than a specific drinking destination, hence I don’t go as often as I should.

What they do have on tap & in bottles is a good selection, and priced very well. Beers do tend to be served a little too chilled, but that is a complaint regards the majority of bars in Edmonton.

It can get very loud when full, and there isn’t even any music on for people to shout over!!

Staff are friendly, always service with a smile, but can be a little flaky and slow/forgetful at times.

Food is good, and always filling.

Check it out when you’re in Edmonton!

I've been a fan of the Next Act pub for years. When I found out new owners had taken over, I wasn't sure what to think. How many times have our favorite eateries or watering holes been ruined by new ownership?

I'm glad I tried the new guys out. The interior space is still the same, minus the self serve breathalyzer with the handwritten "kaput" sign. The walls were given a fresh coat of paint and some tasteful black and white photos put up on the wall, brightening the place up a bit. The new decor is nice, but I kinda liked the subdued decor of the old place. Well, that's okay. The place still looks great.

The beer list has improved a little bit since the new ownership. One of the features I like of the new beer selection is the Alley Kat. In addition to having Full Moon on tap, they always have Alley Kat's current seasonal on tap. And the first Tuesday of every month is cask night. Alley Kat brews a single keg of cask conditioned ale and the Next Act taps the keg at 6pm sharp. Show up early because when the keg's gone, it's gone.

The menu's been paired back a little bit, focusing mostly on burgers, sandwiches, and some apps. The Writer Burger is possibly one of the best burgers I've ever had. And the hummus with fresh naan bread is amazing. The naan bread is so fresh, it tastes as though it came fresh from the oven.

Even though the Next Act is a good 30 minute bus ride from my apartment, I try to make it down there as often as I can. After all, the food's good, the beer's good. And the service? Even during happy hour the service has always been prompt, attentive, and friendly.

The Next Act in Edmonton, AB, Canada
Place rating: 3.9 out of 5 with 4 ratings