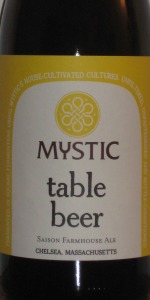 Notes: Mystic Table Beer traces its roots back to a time when water was never an option at the dining table. Beer from 1.2-4.5% ABV was served at the table as well as in the fields in the form of saison. Its flavor and texture are derived from our house yeast strain, ‘Renaud’ as well as traditional bottle-conditioning.
View: Beers | Place Reviews
Reviews: 40 | Ratings: 208 | Log in to view all ratings and sort
Reviews by ManapuaMan:

Aroma is on the lighter side but by no means faint - it's more restrained. Fruity esters give way to green apple, light banana and apricot. Earthy slightly spicy body before giving way to the fruity yeast and a tart peck on the cheek.

Light and refreshing, easy drinking but not watered down. Nice complement to a meal.

Pours a murky light yellow with a foamy off-white head that settles to a partial film on top of the beer. Small streaks of lace form around the glass on the drink down. Smell is of malt, grain, yeast, spice, and earth aromas. Taste is much the same with yeast and spice flavors on the finish. There is a mild amount of yeast bitterness on the palate with each sip. This beer has a good level of carbonation with a crisp mouthfeel. Overall, this is a good beer that is tasty, light, and refreshing.

I really like seeing these session saisons and Belgian table ales coming into popularity. the session ipa thing is running its course, and its nice to have these more interesting alternatives. mystic is awesome, so its no surprise they did a great job with this one. super pale white yellow in color, a little cloudy, with a patchy drifty white head, looks nice in a wine glass. it smells pretty bitter, hop bitterness right away, but there is a soft and almost soapy aromatic yeast I really like, so much less Belgian and more farmhouse than expected, I like it a lot. the grain base is medium bodied for such a light beer, fresh, and like shredded wheat square cereal in flavor, with a floral to bitter hoppy element mid palate and that soft yeast there as well to uplift it and make it feel even more summery. carbonation is right on, and the beer just keeps expanding and opening up, really well made. seems simple compared to some of the gnarly process intensive stuff these guys do, but I loved this, found it super refreshing and seasonally perfect. not enough of these out there...

From a 750 ml bottle, this is a hazy golden brew with a white head. The aroma is of yeast, fruit, and spice. Some grass and twang are present in the flavor. Clean, slightly dry, and enjoyable. Medium-light in body with a little more bitterness than expected. Worthy of a table.

Mostly sour with a bit of earthiness in the background. True Saison aroma.

Less sour up front, but still present. There's a peppery finish, but it isn't bitter. There's a bit creaminess to the flavor as well. Quite thin body with a highly elevated carbonation level. I'm drinking this with a spicy beef stew and the two go together very well.

Light amber and hazy with a giant, frothy, white head. Light sweetness from the malt that plays beautifully with the earthy hops and fruity yeast. Whereas a lot of saisons have a spicy quality to them, this was more mellow and earthy. Great balance between the malt, hops, and yeast. Very dry finish which kept me coming back for more. Extremely easy to drink and disappeared way too fast from my glass. This beer is welcome to my dinner table anytime. Excellent!

Taste: Pear and wheat, with building band-aid phenols and some barnyardy farmhouse elements; peppery and herbal, after the swallow, with a leathery finish

Overall: A very interesting session ale with a lot of flavor elements going on

Dig the premise, and since the price wasn't too egregious by New England standards I decided to give it a buy.

Smells light and peppery. Nice, chewy saison yeast dominates the aroma. A little one-dimensional (this is the rare style that can benefit from minor skunking, imho), but perfectly fine for the style and strength.

Tastes good, but not great. Light grain and medium-strength yeast start things out, chewy with some nicely assertive white pepper. Ends on a bit of grainy offness that just doesn't fit the style. Doesn't ruin the beer at all, but it doesn't really jibe together. The aftertaste is quite pleasant and dry.

Mystic's Table Beer is the liquid equivalent of a smiley face: bright yellow with a gleeful glow, exuberant bubbles and a lacing that actually leaves facial-like features on the glass (provided you have a vivid enough imagination). In truth, however, its head is impressively built and sustains itself magnificently.

The aroma smells something like a peppercorn- and thyme-infused honey; it has sweet, spicy and herbaceous elements. The yeastiness makes it quite fragrant. It's supported by underlining citrus peel notes of lemon and orange, plus there's a bit of apple skin in there too.

The smart people at Mystic correctly point out that Belgian ales like this one were widely consumed at a time when water was often unsafe and field-hands couldn't be afforded proper meals. While this is certainly quenching enough to drink like water, it's also a pretty hearty meal replacement...

The taste is like an apple and oats porridge with a drop of honey. It's got enough of cereal grain and fruit flavour to give stouts a run for use of the "breakfast" moniker. There's also a lighter, brighter side to it that showcases citrus zest and lemon thyme - ultimate summer flavours, any time of the day.

Anyone hypothetically forced to drink the same beer with (or as) lunch or dinner everyday could do a lot worse than Mystic's Table Beer. It is refreshing, flavourful and food friendly. In an age where "Saison" is being interpreted in all sorts of ways, this is a good reminder of its humble, rustic roots.

A: The beer is hazy light straw yellow in color and has a moderate amount of visible carbonation. It poured with a quarter finger high bright white head that died down a bit but consistently left a thin layer of bubbles covering the surface, a collar around the edge, and some lacing down the sides of the glass.
S: Light to moderate aromas of yeast are present in the nose.
T: As in the smell, the taste is dominated by flavors of Belgian yeast, although these aren't as strong compared to other beers in the style and there isn't any associated spiciness. Hints of lemons are also noticeable.
M: It feels a bit more than light-bodied on the palate and has a moderate amount of carbonation.
O: This beer is very easy to drink and can be considered sessionable. It would pair well with a meal since it doesn’t have any dominant flavors.

I believe the batch number is 002. Its a bit illegible on the label.

Pretty excited to try this. Low abv and of the saison variety? Sign me up. Cloudy, hazy straw yellow with a big fluffy white head. a bit of lace and retention. Lots of yeast and barn and a bit of funk, earth, and humid summer day if you know what I mean. citrus and other fruit show up in the flavor with plenty of the yeast and barn that was in the nose. Great carbonation and body. Easy drinking, smooth, and perfect for the weather. I will definitely drink this again! Fantastic stuff.

Bottle from Ball Square.
Pours an incredibly clear deep straw color with a huge fluffy white head that dissipates quickly but leaves some stickies on the side of the glass. The aroma holds some nice sweet bready pilsner malt with hints of citrus, flowers, and a restrained yeastiness. The flavor is quite nice, light bready cracker like maltiness with a hint of sweetness. Very light citrus and yeast flavor rounds this out. Light to medium bodied with a moderate level of carbonation and a lightly sweet slick mouthfeel. Very light flavorful easy to drink ale! Hell put this in a summer six pack! Great warm weather beer.

Had this on tap last night at Seymour in Greenfield, MA. The beer had a copper color with a thin head. Aromas included a slightly buttery, but floral smell. The taste was interesting; somewhat followed the nose, but I could sense a very light taste of a creamy vanilla flavor. Very carbonated and crisp. Overall, this was a good beer, especially with its aromas and mouthfeel.