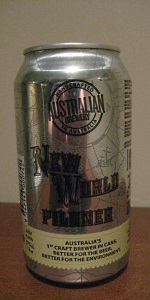 This beer pours a clear, bright pale golden yellow colour, with a fistful of puffy, rocky, and somewhat chunky off-white head, which leaves some sudsy disintegrating Continental lace around the glass as it slowly seeps away.

The carbonation is active in its probing and swirling frothiness, the body a so-so medium weight, and generally smooth, I suppose, but for a wee pithy clamminess arising as things warm up a tad. It finishes off-dry, but barely, as the malt teeters, and the mixed hops hold on for just one more try.

Overall, the classification here (German Pils) makes more sense than the label's proclamation - sure, they say that they used Motueka and Cascade hops in this brew, but you'd never know it in the drinking. Not a bad offering, just one with a minor identity crisis, is all.

Reviewed by SmashPants from Australia

Appearance: pours a light amber yellow with fine carbonation. A fluffing head bursts up to an inch before dropping to a thin cap. Looks okay.

Aroma: there are decent aromas of clean malts and grassy hops. Smells of a crisp - if formulaic - pilsner.

Taste: again clean malts and those grass hops, with some citrus and earth. Decent.

Aftertaste: some hop bitterness, but not much more. The body is a bit lacking.

Mouth feel: light in body with a moderate carbonation that seems to struggle to carry the flavours. Makes it feel a bit flat and flaccid.

Overall: this is the second beer I have tried from The Australian Brewery, and whilst it is a bit better than their Pale Ale, it isn't quite to the same level as the established brands - particularly for the equivalent price of AU$65 for 24 x 330mL. I'd recommend spending a small amount more on Weihenstephaner Pilsner, or Knappstein's version if you want to try and Australian take on the style.

3.39/5  rDev -2.3%
look: 3.5 | smell: 3.25 | taste: 3.5 | feel: 3.5 | overall: 3.25
This is 4.8% and it pours the palest golden straw hue I've ever seen and leaves a very fluffy three finger head that stays and stays,the smell is herbal earthy noble hops,sweet honeyish malts,hay and freshly cut grass,the mouthfeel is medium bodied with moderate carbonation and nice for the style with tastes of those noble earthy hops keeping it nice and bitter with a slight cameo from those honey malts to keep the bitterness in check and finished with a grassy bitterness and overall not a bad effort from my first offering can from an AUS brewery and good to see while it wasn't bad there are some better ones out there cheers.
Sep 02, 2013
Rated: 3.25 by magpieken from Australia

Smell is light and inoffensive. Fair grain character with minimal sweetness, touch of fresh grass clippings and some herbal hop notes. All very clean and lagery, not very aromatic but fine.

Taste is more grainy with a rounded malty edge to the front. Hint of brass, toffee and some dry citrus notes. Hint of medicinal herb on the back and maybe a slight POR-esque bitterness. Bit of a lemon detergent flavour lingers on the late-mid and mars the clean drinkability, but not an unpleasant palate overall.

Fairly dry, kind of crisp mouthfeel, clean enough. Bit over-textured but for a pilsener it's not bad.

Decent pils; I've had tastier and more drinkable ones but it holds its own.