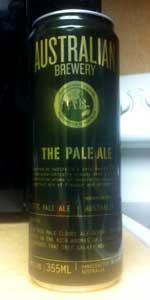 Reviewed by life_of_agony from Australia

Very citrussy with a distinct lemon hit. Quite sharp on the nose with a very light malt profile. The hops are clean but uninspiring.

It isn't bad on the palate. A combination of light malt, light bitterness and some lemon and kiwi fruit. There is a touch of pear too. It is a very light APA.

A light, simple Pale Ale. A little too light on for me but there are some interesting hop notes.

Reviewed by SmashPants from Australia

Aroma: the first thing I noticed were the citric hops - not much complexity to it. A bit of malt backing, but for the most part a bit ordinary - doesn't inspire much confidence.

Taste: if the aroma was a touch unsubtle, the taste is somewhat demure, almost lacking. I can see where they were heading - light bread malts with grapefruit and passionfruit hops - but it lacks body and complexity. Still, not a bad pale.

Aftertaste: not much aftertaste at all - nothing coming through. Not a big problem though - it is quite sessional.

Mouth feel: I think this is where half the issue is - this beer could really use more carbonation to carry the flavour through better.

Overall: an interesting attempt at a pale ale, but I think there are two places I think they went a bit wrong. Firstly, the taste is a bit wishy-washy - there is little in the way of body to it. Secondly, at AU$50 a case of 16 cans (2013), the price is completely out of touch with the average quality of the beer.

Reviewed by soju6 from Missouri

A: Pours a cloudy pale straw color with a decent head that fades to bits of lacing.

S: Aroma of citrus and fruit with bit of malt in the background.

T: Taste of citrus with a bit of malt sweetness and grain. Decent bitterness and a clean finish.

Taste is smooth and creamy with passion fruit in the mid palate and actually finishes quite sweet. Hints of yeast come though as it warms

Mouthfeel moderatly carbonated, not over fizzy or zesty.

Overall, a very well made and flavoursome ale, tho more creamy and sweet than you I suspect that might lower the session factor.
Between Coopers Pale and S&W.

3.17/5  rDev -2.8%
look: 3 | smell: 3.5 | taste: 3 | feel: 4.5 | overall: 2.5
'The Pale Ale' as it is known, sold in a 4-pack of 355ml cans at Dan Murphy's, is an interesting sort - craft beer in a can? "Outrageous!" the brewing community would say, however I don't think it's that big a deal, beers have a tendency to taste metallic to me anyway (due to the steel vats they're brewed in) so what's a little extra aluminium from a can matter? I also noted that their web site classes this as a Pacific Pale Ale, code for stone fruit hop flavoured beers that are a mid-point between EPA's and APA's in bitterness.

Poured from a 355ml can into a nonic pint.

A: Possibly one of the palest ales that has ever aled. Presents with a cloudy lemon coloured body and a frothy white 1cm head that reduces to half a centimetre.

S: You can really smell that passionfruit aroma of Galaxy hops, good - I was hoping this wasn't another Aussie beer that promises hops but doesn't deliver. Other than that there is citrus (also from the hops) and a faint whisper of grain and yeast, but the hops really entice one to drink.

T: Well it's no Murray's [insert one of their numerous pale ales here], but it's not bad either. Light malt followed by a hint of sour yeast and stone fruit/passionfruit with a slight bitter grapefruit citrus finish. It's lighter than other PPA's (Pacific Pale Ale) like Stone & Wood, which helps it quench the thirst but also reminds one that it is lacking in flavour as well.

M: Shines in this department; mid to light body with creamy dense carbonation.

D: Overall a bit one dimensional, that dimension is the aroma which is the best part of this brew. However ultimately it's a beer and what do with beer? we drink it! and flavour-wise it loses out, if it tasted as good as I was expecting then they would have been on to a winner. Oh well *goes out and buys a 4-pack of Murray's Angry Man Pale Ale instead*. Don't get me wrong though - this beer is a reasonable option for session with it's easy taste and great mouthfeel, it's just lacking a bit of character.