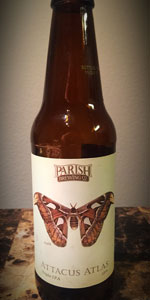 Our highest gravity IPA. Obscene amounts of Galaxy hops used to counter the amount of malt used to get to over 9% ABV."


HEAD: ~10 cm in height. White in colour. Has a decent consistency/thickness...could be creamier and softer, but it's decent. ~10 minute retention. Leaves a light coating of lacing on the sides of the glass as the head recedes.

BODY: Hazy murky orange. Certainly looks more like juice than beer, which I guess to some (most these days?) is a good thing. Obviously unfiltered. No yeast/lees are visible. Not the most vibrant, but it's better than many of the dull India Odwalla ales out there.

Appears well-carbonated. It's a decent looking imperial IPA...I don't know that its lack of filtration does it any favours appearance-wise and it doesn't best widely distributed expressions of the style like Lagunitas Sucks.

From Galaxy I expect citrus and passionfruit....this doesn't deliver. But its hop profile doesn't seem horrid...just underwhelming. Suggests a slightly boozy beer with a stale juice-led flavour profile that is nevertheless drinkable and enjoyable.

TASTE & TEXTURE: Juice and slight pulp are emphasized but are accompanied by an unwelcome alcohol warmth. Papaya, old melon, rind. pineapple...hop profile isn't great and it fails to showcase Galaxy well. Pale malt and some sweeter specialty malt (I'd bet on Crystal and Caramalt) removes any hop bitterness from perception.

Full-bodied but a bit silky. Pulpy and uneven in mouthfeel. Smooth, wet, unrefreshing, warm, somewhat filling...it's not a beer I'd want more than one of in a single sitting. Carbonation is a bit overdone as well. Thick for an imperial IPA.

Texture doesn't elevate the beer as a whole or accentuate specific notes. It's not particularly well balanced given its noticeable alcohol, severely downplayed hop bitterness, and semisweet malt backbone. Lacks the complexity and depth of flavour of the best beers in the style.

OVERALL: I've only lived in Louisiana 3 months, but this definitely wouldn't make my top 10 Louisiana Beers list (let alone #6). It does a poor job of showcasing the best Galaxy hops have to offer and isn't well-balanced, but it's a pleasant enough imperial IPA given its high ABV and while I wouldn't want another 4 pack, I'll enjoy working my way through what I've got. I can't say it's worth the high price and Parish certainly makes better hoppy beers (DDH Ghost In The Machine comes to mind). Seems to chase the turbid IPA trend without delivering on imperial IPA fundamentals or bringing a worthwhile hop profile to the table.

I'd sooner buy Lagunitas Sucks or another comparable imperial IPA (e.g. Deschutes), but this is decent. I think some Louisiana-based beer fans have judgement as clouded as this beer when rating it...it holds no candle to the best beers in the style currently available.

Mellow and soft with a pleasant tropical fruit bend. Too pureed and pulpy texturally for my taste, and the hop profile doesn't dazzle, but it's a competent turbid imperial IPA for what it is. I just wish the hop flavours were more vivid, evocative, and distinct instead of vague and blurred together.

I'd sooner drink Hop Stoopid, Dirtwolf, Hoptimum, Maximus, Dorado, and countless others that are both more widely available and less expensive, but this is fine.

Juice bomb that would make Tropicana proud, with an ABV that doesn't present itself until you're rinsing the glass. Exercise due caution....back-to-back episodes will have a deleterious effect on balance.

About what you would expect from a Parish Triple IPA.. That's not a bad thing!
If you like Ghost in the Machine, this is its more mature older brother (Batch 3, btw)

A ton of stuff going on here. I keep describing it as "indulgent."
It pours an opaque yellow with a lacy white head - highly aromatic, less floral and more tropical as a DDH NEIPA should be.
It tastes and feels Incredibly juicy - indulgently so, as I said. To compare it go Ghost in the Machine, there's a lot of the same thing going on but with more of a malt floor- you can feel the malt trying to rise up but it just cant fight the extra hops. Each sip is bursting with citrus juiciness but it's got more complexity and depth than Ghost. The bitterness simply rides the wave, sitting pleasantly but very present on your tongue.
If you can get it and enjoy Ghost or Cocodrie, this is a very pleasant but not to distant departure, at the same price per bottle

Moreso than most, Parrish beers MUST be consumed fresh. They change faster with age than any I’ve ever had.

With that said this beer is just incredibly delicious, even at almost 3 mos old. The body and mouthfeel are just second to none. Easily the best triple I’ve ever encountered. Well done Parrish- and thanks Greg!

A winner to compliment ghost in the machine. True hazy new england style ipa quenches thirst admirably on the bayou or at the beach

On tap at Premium Draught, one of the first kegs I have seen of this in the Houston market.

A: Pours a nearly opaque turbid, murky yellow/orange color. A white head forms and rises to about two fingers. That sticks around for a minute with light lace.
S: I certainly get the pineapple/mango/papaya fruits going up front. Though seem faded and "dirty" if that makes sense. Green and veggie like as well. Everything fades after a quick minute and nothing lingers.
T: Follows the nose with that fruit mixture. Again, not very vibrant and just kind of blah. Green and veggie like again. Some caramel malts in there, and nothing lingers.
M/O: Moderate to low carbonation. I guess you can call it "soft" but it is annoyingly nondescript and muddled with a dirty feel that I am not liking. Maybe a touch alcoholic, but not bad considering the ABV. Just not very vibrant in anyway for me.

This is a let down. I have never been the biggest fan of the NEIPA style in the first place. Though Parish at least is the one brewery that I felt made examples that I could come back to. To me, I'm not getting any great hop punch, no vibrancy, and what is there finishes too quickly.