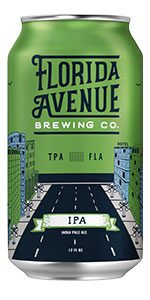 Notes: A classic American IPA, brewed with Cascade hops, with hints of grapefruit and other citrus characteristics.
View: Beers | Place Reviews
Reviews: 29 | Ratings: 139 | Log in to view all ratings and sort
Reviews by HalfFull:

From notes 3/13. 12 ounce bottle poured into a pint glass. 'Dry hopped with cascade for an awesome hop experience' on neck of bottle.

Pours a light copper with a thin layer of off white foam, light retention with fair to decent lace. A bit undercarbonated like many of thier brews and perhaps aimed at consumption direct from the bottle. Brewed and bottled, I believe, at a location other than the small brewery/tasting room here.

Nice citric hop aroma initially or after a good spin, yet less so when the beer glasses over given the light carbonation. it's a constant battle to bring forth the aroma, yet doing so only makes it even more difficult as the carbonation diminishes further. Pleasant overall though a bit reaching, yet nothing to deter.

Hint of caramel on the taste along with a neutral grain character, light sweetness on the finish accompanied by a light though not quite faint bitterness. Feel is smooth for an IPA given the light bitterness. Hop aroma is enhanced with warming but still subtle.

In the end this beer drinks like a Pale Ale. A Sierra Nevada Pale Ale with a bit less caramel and a bit less Cascade as well. An easy drinking warm climate Pale Ale.

Glad I sampled this beer while on vacation in Florida.

Tastes very wheaty... Not in a good way. Doesnt wow me with complexity. Has a lingering bitterness that is never remedied. And an abv that isn't attempted to be masked. Def would avoid this beer unless only other options were light.

Smells like swamp water, very easy IPA to drink, tastes alright but won't knock your socks off. Would only get again if there were no other solid options.