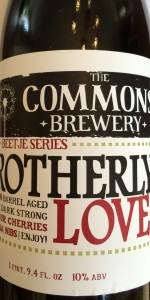 Thanks to AndrewK for sharing this one at Wowcoolman's tasting.

Pours a murky dark orange with a foamy tan head that settles to a partial film on top of the beer. Small dots of lace slowly drip into the remaining beer on the drink down. Smell is sour and tart with malt, cherry, and slight cocoa aromas. Taste is much the same with cherry and bourbon flavors on the finish. There is a mild amount of woody bitterness on the palate with each sip. This beer has a good level of carbonation with a crisp mouthfeel. Overall, this is a good beer that is tasty and easy to drink.

Bottle: Poured a dark burgundy color ale with a large off-white foamy head with light retention. Aroma of sweet dry fruits, with some light chocolate notes and some bourbon/vanilla notes. Taste is a complex mix of chocolate, sweet dry fruits notes, light molasses, some residual sugar notes and some bourbon and vanilla notes. Body is about average with good carbonation with no apparent alcohol. Intriguing experiment with great flavours but lacking some cohesion.

The aroma is sweet bourbon and chocolate with some cherry, dark fruits and cinnamon.

The flavor is sweet chocolate malts with some acidic and tart cherry and some chalky boozy bourbon in the finish. Some cinnamon comes out as it warms. The mouthfeel is medium bodied with slightly sharp carbonation.

Overall, an OK big beer. A bit too sweet and boozy with chalky acidic notes.

Pours a cola like brown color with a small to non-existence khaki head. Settles into nothingness.

The aroma is of dark fruit, mainly raisins. The bourbon is noticeable with nice caramel and vanilla. Some hints of oak as well. Not much from the yeast.

The taste is of a sweet malt, dark candi sugar, and dark fruit. The bourbon works well but is subtle. The sour cherry in the end is nice. The cocoa nibs provide some needed depth.

Moderate feel with fizzy carbonation. Quite sweet on the palate but not cloying. It walks the edge but holds one. Slight sour in the finish.

Solid beer but not great. I would like to see more BSDA characteristics. Needs more depth there.

A: The beer is close to being black in color—slight traces of reddish brown are visible near the bottom of the glass when it is held up to a bright light. It poured with a quarter finger high beige head that only died down a little and consistently left a short head covering the surface and a collar around the edge of the glass.
S: Light aromas of dark fruits and bourbon are present in the nose.
T: The taste is similar to the smell, but the bourbon flavors are much stronger and linger through the finish. Except for the bourbon, no traces of alcohol are noticeable.
M: It feels medium-bodied on the palate and has a moderate amount of carbonation.
O: This beer might not be a bad selection if you like bourbon, but it seems like there is too much bourbon in the taste so that it overpowers the flavors of the dark fruits.

750mL from the brewery via cavemanlawyer

A: Red clay color with a very foamy creme head. Has some sticky legs and looks alright.

N: Sour cherries over a malty base. I get a hint of bittersweet chocolate, but the cherry is mostly overpowering everything else in this bottle. There’s a hint of leather, some caramel and toffee, and some of the Belgian ester.s.

T: Baker’s chocolate bitterness and a hint of tartness. Sweetness spreads around the tongue, but it’s a third player. Yeast shows throughout.

O: Reminds me a lot of Three Philosophers, a beer of which I’m not a fan. This isn’t as complex, bready or yeasty as I want. Needs more density.

Reviewed from notes. 750ml bottle shared by Andrew - thanks.

A: Pours a dark brown with crimson highlights under a 1/4" thick off-white head which fades to the rim quickly and leaves spots of lace.

O: Good, but not something I'd seek out.

Appearance- Pours up a good amount of head which appears to have fairly good retention as well. The head is a light and creamy beige while the body is a dark, chocolate brown that shows hints of burgundy and crimson in the light. Spots of lacing.

Nose- Lacks presence but does have a good amount of complexity. Started with some cloves and banana and then shows some raisins and slight apple. Rounded chocolate around the edges. Some spice, mostly cinnamon. Some plums, cocoa, maybe even a little brown bread, molasses, and brown sugar. Some cherry, minor heat. Light notes of bourbon. A good start and I won't mind if the palate is as subtle as the nose because I like all these aromas.

Taste- Starts off with raisins, cherries, and plums while the bourbon notes show themselves quite quickly. Some chocolate in the background. Substantial notes of oak from the bourbon. This certainly doesn't have the problem that Little Brother has; you can't help but notice the bourbon. Makes it seem boozy though there isn't much real heat present. Some notes of lemon and orange. Cherries and chocolate are lighter than the label would suggest but they are there and they do produce a nice subtle background. This is not an in-your-face beer as even the bourbon notes start to mellow and I do not think it's trying to be that type of beer. You have to take it for what it is- a nice, subtle beer. I would say that it is between good and really good at the moment. Banana and cloves start to show up on the finish along with some cinnamon. This beer does seem to confirm that BSDAs and Quads don't really take to barrel aging as some other styles might. Still an enjoyable beer. Lacking somewhat in presence but has good balance and integration other than the slightly messy booze note of the bourbon. Fairly complex but subtle. A good offering from the Commons but not the wow beer that I've been waiting for from them. Some caramel, slight vanilla. As it opens up, I really appreciate the mild nature that may make this just a really good beer instead of maybe just a good one.

Mouthfeel- Medium to heavy bodied with mild carbonation that gives this a bit of smoothness. Somewhat of a dry finish. Slight syrup to vinous texture.

Overall- Good, solid beer to really good beer but closer to really good. Doesn't amaze but this beer isn't about that- it's more about subtlety and approachability. I imagine this beer pairs well with many foods, especially chocolate. I only wish there were more chocolate and cherries in the actual beer. Definitely worth a try and while I won't be grabbing any more of this year's, I will grab a 2015.