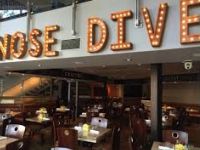 Reviewed by thagr81us from South Carolina

4.22/5  rDev +11.1%
vibe: 4.5 | quality: 4 | service: 4.5 | selection: 4 | food: 4.5
Stopped in here for a friend's birthday dinner. Location is very easy to spot from the street or by walking down the sidewalk on Main St. Upon walking in you will be promptly greeted by a hostess who will show you to your table (I suggest a reservation) or guide you to the bar. The atmosphere in here appears to be pretty up-scale as is the quality of everything. They have a constantly rotating 6 taps on at all times. No BMC on any of them, which was nice to see... The bottle selection they had was also not bad either. The food I got was quite excellent and cooked nicely (medium-rare steak). The prices on the food was very reasonable for what you get, but the beer was a LITTLE high in my opinion (on the bottles). This could definitely become a nice place to go after work and have a beer or two after work for people in the downtown area. Worth stopping in AT LEAST once.
Mar 22, 2011
More User Ratings:

Reviewed by Slack from Virginia

The vibe is a bit funky, especially upstairs. Bartenders were wacky but funny. Draft selections were limited as were the bottles, a bit more selective (elysian space dust on tap) but still had a fair amount of macro stuff.

We ended up grabbing a cocktail as that is what this place is known for. Gene Hackman was legit. No food was to be had. Check it out if walking by.

Reviewed by TonyLema1 from South Carolina

Reviewed by PhillyStyle from Georgia

The other reviewers have pretty well described the place to good detail, so I won't go into that. I must say that I did find that the place was not all that inviting, as the tables were spread pretty far apart and the place had concrete floors.

The place did have a decent beer menu as the other reviewers noted, yet nothing that I couldn't find at my local beer store, but I must give our waitress some credit. I ordered a Hefeweizen and she knew how to pour it, which while I should not have been all that impressed, I actually was, as most don't know how to pour it.

The food may have been a better attraction than the beer. We had the Maryland crab pretzel, the Scotch egg and some frites, which were all very good. I also had the fish and chips, which may have been slightly better than average. The service was good. I thought that the prices were very reasonable. Overall, if ever back in Greenville, I might go back.

Reviewed by goindownsouth from New Jersey

The atmosphere is, I admit, a bit odd considering the place is advertised as a gastro-pub. Instead of dark wood, there are concrete floors, shiny metal and all sorts of other accouterments that resemble the former Restaurant O which closed some months ago in this same location and was owned by the same ownership group.

Service was slow and had a few errors. The server was admittedly new and, despite the place being open for over 6 weeks, I was willing to overlook the minor mishaps. She was bright, considerate and accommodating. Not much more I could ask for there.

My wife and I decided on a few things from the food menu, just to have a sampling of the appealing offerings. The Maryland Crab Pretzel was amazing, but the star of the "snacks" was the Pork Cheek Pierogi - amazing, succulent, with an apple-spiked sauerkraut that was killer with the spicy mustard provided. The frissee salad with candied pecans, bacon and poached egg was killer as well. For the main course, I could not NOT go for the oxtail tacos with amazingly fresh guacamole, salsa, lime wedges and cabbage. Outstanding.

The beer menu, I will say, is okay. Ranger IPA was the best I could find on tap, which is very acceptable. After some initial concerns, ownership apparently listened to the cries about the ridiculous initial pricing for some beers and brought things down to Earth.

A solid addition to the Greenville area, The NoseDive is doing some great things from a culinary standpoint - and at GREAT prices with snakcs at $6 and sandwiches and the like at $8 with $14 main plates. My hope is that they are truly interested in developing their beer list and continue to work to make the place a cornerstone in the area and not "just another restaurant", of which we already have too many in Greenville.

4.2/5  rDev +10.5%
vibe: 4.5 | quality: 5 | service: 3.5 | selection: 3.5 | food: 5
I was really glad we wandered into this place, as it was the best food we had in Greenville, and very reasonable to boot. Beer selection is well chosen, if small, and changes. They had:
- New Belgium Ranger IPA
- Thomas Creek Dockside Pils
- RJ Rocker Son of a Peach
- Highland Oatmeal Stout
- Allagash Belgian Black

All the food was great. Lots of small plates and salads for $6, except they were really generous sized. Both the Nicoise salad and the pate with bread and pickles were excellent. For $8 there are meatier things, and we had Vietnamese sandwich and truly outstanding oxtail tacos, meat in a crock with several tortillas, warm avocado, salsa, cabbage and cilantro, chips. Big plates too. Lots of choices and way, way more interesting than the usual brewpub or sports bar places. No wings.

Plus the atmosphere was way more upscale than the prices. White tablecloths, huge windows, and a nice sheltered patio where we ate outside watching the action on Main St. and hearing the dim bare from the Carolina ale House across the street. Trees lit up, sculpture. Check this place out for what they might have on tap and definitely try the food if you like it interesting.