A Deal With The Devil - Triple Oak-Aged
Anchorage Brewing Company 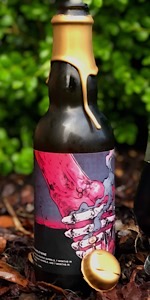 Reviewed by Zach_Attack from Massachusetts

Upon finishing this beer I would certainly agree thats its world class. It also is oh so similiar to jw lees harvest ale as its warmed and settled. This is hotter but apart from that I'm hard pressed to say that it has a lot to brag about to certain JW lees vintages (2002 and 2007 harvest ale stick out in my mind as being some of the best ever).

Further edit. As I REALLY get to the end of this beer its almost cumbersome. Its fsr too hot and far, still too sweet. Its almost like jungle juice and I'm not even joking.

Rated by jakecattleco from California

Rated by ellswrth from Oregon

4.25/5  rDev -10.5%
look: 4.25 | smell: 4.25 | taste: 4.25 | feel: 4.25 | overall: 4.25
A: The emergence is dense on lucidity with a materialization that ensues oily margins. Similarly, a visibility on fingers thru a firewater viscosity, at a state where the collar is annulled, if tolerant on time. The pour is deep on mahogany, and transcendent on ruby highlights, while the neck transcribes a copper to chestnut tone. Correspondingly, a thinning out on retention to the hour, which terminates lace delicately, before that annulled header addressed above

S: The cask recitals circumference the subtle (earthy) hop effects, which quarter the esters, while building a strong dexterity around sweet – bready – malt. An inclination on dark fruit that ranges to elderberries, when exhibiting dated prunes amongst raisins. Sequentially, an armored disposition on Crème caramel that’s been slightly browned to aptness, before taxing in a Mackintosh bar. The inclining humidity brawns a treacliness over a Black Forest Chocotorta & liquored truffles, while pitting leathery advances against brown sugar tobacco. Synchronously, a hop bite to softly cuddle malts candied advances on creamed variations, when sylvan elements develop upon the tarry dried fruit inclinations. With this in mind, a bittering – woodsy – expansion that’s deepening on pine resin around timberlands, yet a facilitating aid to not overextend the greenery virulence. Moreover, a step that nears Goobers with a charred following on walnuts, besides stale cherry bitters to coriaceous stipulations. Oxidation is lightly pressed against the late solvent esters that work to benefit the movement, by suggesting a Pedro Ximénez cleverness, while barreling the oak staves at length

T: Bourbon continually pillars the complexity with a warming – humid – torridness on malt, as hops lightly frame a woodsy path. The elements touch on a caramelized fig custard, while parading crystallized stone fruit in a molasses – marshmallow – soufflé. Secondly, a posturing sweetness to neighbor an unwanted cloyingness in balminess; however, a position that’s impeccably groomed to cloak heat. In sequence, a spice to fruit component that prompts Ethyl Caproate under the residual malt pleasantness. There is an ongoing sentience over the varying cask proportions, which are competently equipped to gamble on the sustained aeriation. Thusly, meandering polymers to further provoke/strengthen vanillin aside honeyed spices, while continuing to calibrate the oak lactones. The barrel presence continues on to address almonds with lightly shredded coconut, as a hard Skor emanates against fudge. In addition, liquored raisins applied to charring, when shriveled cherries pass cordials & cola taffy, once hops attune that backwoods kick to face grape – brandy – bugs. A measure that becomes thirsting of tannin stipulations in the patient exertions, as dried leaves spread from a nearby – progressive – ruin

M: Sidesteps under-attenuation in the inclusive duty, of not overwhelming the rich records. Nonetheless, the approach is sweet with a chewy dexterity and a warming sensation, while carbonation is handled in a judicious manner. An approach that does not burn or madden the slick feel, as longevity offers a calm smoothness, in the act of intellectualizing a system over the dry (oak) tannin mannerisms

O: A hop bill that’s cautiously tempered against a glucose powerhouse, which bypasses the aggressiveness on bite, while still prominent to ally the esters. They offer a balance to the finer points on wood amid the several transfers, as malt sweetens the complexity chronologically, in anticipation of the craftily dry hooks. An onset that’s censoring on depth with a tough buildout; albeit, an advantageous/more beneficial buildout, if given the patience to draw out time

Rated by BourbonForBeer from Illinois