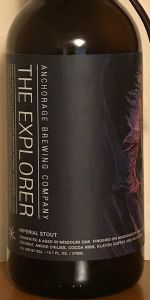 Rated by mdfb79 from New York

Melted chocolate bar, thankfully has the carbonation and semi booziness to still read as beer. Pepper comes after as lip residue. Borders on what I call as artificial. Still think I prefer Prairie bomb and would say lose the lactose. So unique it justifies the price, IMO.

If I've seen a beer appear this thick, I can't remember it. Viscosity is lovely but gimme a tinge more carbonation.

Reviewed by o29 from Texas

The beer glugged out slowly, then just practically stopped as the pour slowed to a drizzle.

After rousing the bottle a bit I was able to get the pour to resume, but now I was curious -- what was preventing it initially?

"That's kind of a strange head," I thought. "But at least there's not the typical issue with head formation that high-ABV stouts tend to have."

After closer examination, the head really is...weird. Large, tall mocha bubbles arrange in a honeycomb pattern and spread out over the surface. This head is unlike anything I've ever seen, but certainly not in an appetizing way. The bubbles are so large that there are only about 20 bubbles covering the entire surface of the beer, some I would estimate as large as 1" in diameter.

I went back to investigate the contents of the bottle to find out what was preventing the beer from pouring, and what I found from flushing the beer with warm water was a thick, black sludge that was wider than the neck of the bottle.

n addition from the above, once I got through the, we'll call "interesting" head, the beer had numerous thick chunks floating around its surface and throughout.

Ultimately I have to rate the look of this beer a 1. The fact that others rated this something other than 1 makes me question both my and their judgment.

Then, there was the aroma, the taste, and the mouthfeel, and while I don't exactly feel like the beer set itself up for success with its appearance, it did nothing to redeem itself in any of those factors either. It was extremely sweet and seemingly rather imbalanced.

I've thoroughly enjoyed several other of Anchorage's big BBA stouts, but this unfortunately was far from one of them.

I couldn't finish more than 1/5 of it unfortunately and had to drain pour the agonizingly pricy remainder, but it seems my experience is somewhat atypical since as of writing my rating has a whopping -26%rDev from the average.

Reviewed by DokiDokiLitFam from New Jersey

Nose is chocolate, coffee, coconut, and pepper. The combination of these notes reminds of a mole sauce. The pepper is quite vibrant and gives this nose an interesting twist. This is captivating.

Taste is the chocolate, coffee, and chiles competing for dominance. The chocolate mole sauce taste is incredibly unique. The coffee gives a roasty and bitter quality. The pepper is so strong in flavor. Its green, vegetal which provides a contrast to the sweet chocolate and coconut. This is so different. I've had Big Bad Baptist and Abraxas, but the pepper in this goes farther and almost seeks to create a sauce-like profile. Outstanding.

Mouthfeel is thick, dense, and cloying. (Like every other Anchorage stout) The heat from the peppers comes in on the back end. If you manage to catch chunk of pepper, prepare for a mild burn.

Overall this is a different brew. This isn't for everybody. Perhaps this is why its called the Explorer. But all said, this is tasty and unique. Most of the time, brews that add chiles do so as an accent, but this is nearly the focal point. I'm glad to see this Anchorage Stout has its own personality. I have a few more to go...

3.79/5  rDev -11%
look: 1 | smell: 4.5 | taste: 4.5 | feel: 1.5 | overall: 3.5
Appearance: First time I ever had to pour a beer through a sieve as there were clumps of something brown and flocculated that were unpleasant to see; what resulted was a pitch black liquid with speckles of the mysterious substance that slipped through the sieve, little bits of which clung to the side of the tulip

Taste: Dark chocolate with the ancho chile making an early statement; coffee, coconut and vanilla round out the profile; oaky, through the middle; the heat builds, after the swallow, but cuts out just short of being overwhelming

Overall: Excellent flavor but I feel that Anchorage took a shortcut in the bottling process

3.15/5  rDev -26.1%
look: 1 | smell: 3.5 | taste: 3.5 | feel: 2 | overall: 3.25
375 mL bottle. It's one of the grossest beers I've ever poured. Inky black with floating reddish chunks. When I drink it, i get chunks of brown in my teeth. Yikes. Smells of chocolate, coffee, and a little pepper. Tastes of strong coffee, some pepper, coconut, sweet chocolate. Big swigs have strong pepper in the finish. Medium heavy and spicy. I have to chew the chunks. Which is really unpleasant. I can't say there's anything wrong with the flavor, but the texture is really rough.
Oct 24, 2021
Rated: 4.12 by DucksFan16 from Tennessee

Coconut, lots of fudge, peppers are faint, vanilla, bourbon, and oak. Lots of cocoa and chocolate. Warming and smooth. Despite the sludge, I really enjoyed this one.

Reviewed by pkalix from California

Rated by Jkinneer from North Carolina

Reviewed by fstone from California

Look: Thick and pitch black. Opaque. Thin layer of mocha colored head disolves into what can best be described as sludge. What looks like a lactoderm layer sits atop the beer with large chocolate milk bubbles throughout.

Taste: follows the nose. Heavy dark hot chocolate. Vanilla. Hint of coffee and chili,lll which play very well together and balance each other out. Not hot (spicy), but you do get a nice little tingle on the back of your throat. High abv very well hidden.

Feel: Thick, viscous. Low carbonation but detectable. Chili prickles the throat as it goes down. Coats the tongue with the chocolate pleasantly lingering for some time.

Overall: another fantastic barrel aged stout by Anchorage! A complex but balanced hot chocolate in the form of an ale. Just enough of each adjunct to make this all come together. Only gripe is that I wish the coconut had more shine. Yes, this beer IS safe...and tasty. Nevermind it's appearance!