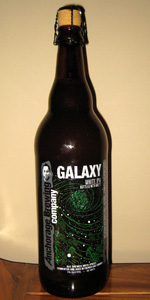 Pours a hazy light yellow, with a little bit of lacing coming from a 1.5 inch fluffy head.

Smells like delicious Galaxy hops- passionfruit and orange, a bit of grapefruit, and some distinct Brett barnyard funk.

This tastes delicious. It doesn't really scream white IPA to me- not really getting the peppercorns. I am getting a varied fruit flavor which could include Kumquats- if I knew what they tasted like. Getting lots of passionfruit, orange, and grapefruit, with some chalky sweet tarts flavors, barnyard funk, and crackery malt.

The body on this one is of light to medium thickness, with a lower amount of carbonation, and a crisp mouthfeel.

Probably the best white IPA i've ever had, although I would have just identified it as an American IPA with Brett.

Sampled May 2012
This has a huge, incredibly distinct, hoppily fruity aroma to it as I pour this beer into my large Tripel Karmeliet tulip. The beer forms a large, five-finger thick, pale head. The beer is a deep gold color and shows a brilliantly clear, yellow-gold hue when held up to the light. The aroma has an intense fruitiness to it that is a mix of Juicy Fruit bubblegum, super floral honey, concentrated tangelo blossoms, apricot, huge lychee, kumquat zest and perhaps even some Guava. The hop fruit character is what dominates the aroma, but towards the finish, and in a much more subtle manner there is a sort of dusty, or perhaps even more musty, sort of “cob-web” like and slightly medicinal Brettanomyces signature; This still is quite subtle, and has a long way towards adding character to this beer (a good reason to age a couple bottles perhaps). As the beer warms up it gets more spicy, quite a bit more funky and just that much more complex

The beer is quite dry, in fact exceedingly dry for an IPA even, but this really isn’t an IPA. The dryness certainly reduces the hop fruitiness substantially in the flavor, but there is still an oral nasal, floral fruitiness that just can’t be completely held in check. The finish has a medicinal, sort of aspirin like, almost mineral like note that seems to be brought out by a combination of the hop character and the Brettanomyces influence. The finish has a bitterness to it (in actuality the entire flavor profile has a certain level of biting bitterness), though this isn’t a super bitter beer, and this combines with a biting note from the Brettanomyces phenolics and perhaps even some astringent green hop character. There is definitely an herbal character to the flavor that wasn’t noticeable in the aroma (again the dryness of this beer brings this out); it reminds me of tobacco, some pine, perhaps of something menthol like, none of these are really distinct in and of themselves though, perhaps it is better described as a peppery, spicy herbal character. This beer is quite light bodied, as one would expect, it is quite quaffable, even dangerously so given the beers strength.

The problem with beers like this, incredibly hoppy / citrusy but bone dry, is that much of the juicy citrus character is lost in the flavor due to the dryness. This beer is a testament to the wonders of Indian coriander, it doesn’t have that dirty herbal character that western coriander does and it really integrates very nicely with the kumquat and Galaxy hops; interestingly enough, I hadn’t realized that coriander and kumquats were used here; I wholly attributed their flavor contributions to the hops, but now having read the label they most definitely contribute. The pepper to adds a nice spiciness to this brew that was again mistaken for hop character. Back to the problem, without the residual malt sweetness that even supports the driest of the usual IPAs, this beer has lost the juicy citrus character that would be otherwise be noticeable in the flavor. While I have compared this a lot to an IPA, it is clearly not one, given the interpretive take the style can have, I would say this fits into the Saison category (at least better than it fits anywhere else). Since I do love hoppy and I do love Saisons, this beer is right up my alley; exceedingly enjoyable and I doubt I will be able to hold on to my second bottle long enough to allow the Brettanomyces presence to increase much.

Appearance: Lightly hazy gold - some light orange in the dark, some yellow when held to the light - pours with a large, white head - leaves some nice lacing

Smell: Loads of funky Brett, some wood, and some witbier aromas - can't entirely discern the galaxy hops, but there are some interesting citrus and grassy notes here - nicely funky - some barrel aromas - some spiciness, with peppercorns - some pepper and clove from the yeast as well

Taste: Tongue-coating Brett with some wood and light citrus - decidedly funky, with both Brett weirdness, straw, and a load of wood - nice use of French oak barrels, which sometimes can be a bit much - citrus, with some nice orange and grapefruit notes - some lightly tropical undertones - some spiciness, with pepper - moderate bitterness - finishes pretty clean

Overall: Brett and hops are bffs

This starts off interesting, and actually gets more interesting as you make your way to the bottom of the glass. The use of Brett is quite lovely, and the hops have held up (even through this is months old at this point). This is the first beer I've had from Anchorage, and it's far from a disappointment.

Poured from the bottle a lightly hazed yellow with one finger of rich white head. Light lacing left behind.

Light-to-medium bodied and quite dry with a sharp carbonation.

An easy drinking and tasty Belgian IPA from Anchorage. It's so good to have them return to St. Louis.

750ml bottle. This is from Batch #1, January 2012. Poured into an unmarked tulip glass. Reviewing from memory.

A: Pours out an extremely hazy, bright yellow color. I remember being pretty amazing at how different the color was. Great carbonation from the bottle conditioning. Big two finger, bright white head that stuck around a while. Left some nice lacing as well.

S: That Brett yeast is very pronounced, which was pretty pleasant being a Brett fan. You got hints of lemon and grassy notes hidden below it. Being an IPA though, the hops were sort of dominated by the other smells.

T: Up front you taste that mild barnyard funk on the tip of the tongue that comes from the Brett. I pulled some lemon, coriander notes as well right away. There isn't a strong hop bitterness, but they are there. It's a nice refreshing flavor on this brew. I remember the finish being fairly dry and not overly bitter.

M: It's a medium bodied IPA. Very highly carbonated which helps the flavors clear the palate.

A - clear pale golden, and has that impressive yet annoying Belgian quality of being so carbonated that the first pour results in a tower of head that takes up half the glass
S - a strange mix of aromas including florals, sour peach, herbs & spices, and a bit of a strange rubbery smell
T - the coriander and pepper are prominent along with a strange sour tropical fruity flavour that I'm guessing is kumquat according to the bottle, yeasty easters and florals towards the finish, but still a strange rubber like thing is in the background
M - light with over the top carbonation that is fairly prickly, finishes slightly dry
O - this one is tough to decipher, in some ways its unfocussed and busy, but I think most of the flavours do jive well enough to create a unique brew within this burgeoning style, may not be for everyone but you have to try it to make that call

750 mL bottle from AJ’s in Aptos. Pours a pale gold color -- not quite as light as a wit or berliner weisse, but still very pale. Aroma is zesty and bright. Big tropical papaya and grapefruit and pineapple, lemon verbena, no trace of malt. Just as it should be. Flavor is a little light on hops due to the aging, but it still has a solid tropical fruit presence. Reminds me of orange pineapple juice a bit. A bit of musty oak and brett, moderate bitterness and a lingering tickle of black pepper. A very impressive beer.

A: Super hazy honey color with a huge bone white head that leaves great lacing down the glass and stays forever.

S: Fantastic smell. Candied orange and juicy mandarin orange, a touch of oak, some great barnyard funk, a touch of coriander and some white pepper.

T: Not as good as the smell, but still pretty tasty stuff. Opens with a touch of citrus sweetness and then moves towards a more bitter middle and finish with grapefruit pith, brett, biscuity malt and some peppery hops.