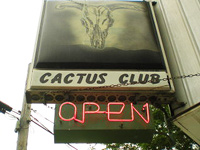 View: Place Reviews
Reviews: 1 | Log in to view all ratings and sort
Reviews by Beerandraiderfan:

I don't know who submitted the Cactus Club, but they are first and foremost, a place where generally shitty bands that should have day jobs play in a small room. That's not to say I haven't seen a good (even great) show here or there at the CC, but in general, its the same guys and gals pretending that their coffee barista, waiter, dishwasher job isn't what they do for a living.

Service is usually slow and with a shitty attitude. Bartenders still look like they're ripping off the grunge scene with some indie hipster tweaks, despite the recent renovation, it would have been nice if they renovated the work crew. All have the same tattoo ink style. Awesome jukebox though.

The Cactus Club in Milwaukee, WI
Place rating: 3.03 out of 5 with 1 ratings