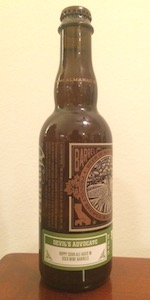 Notes: This 100% brettanomyces ale is brewed with Mosaic hops, fermented warm and soured in wine barrels. Right before bottling, it’s dry hopped with Nelson hops to create an aromatic and sour ale that embraces both our love of farmhouse funk and tropical aromas of passionfruit, mango and melon. A delicious contradiction of flavor and style.
View: More Beers | Place Reviews
Recent ratings and reviews. | Log in to view more ratings + sorting options.
5 by TallGuyCM from California on Jun 11, 2020

Pours orange, white head 1/5". An appearance most often associated with an ipa, especially in these "Donald Duck cryo hop juice" times. Neat aroma, Mosaic hops giving plenty of those tropical fruit and to a lesser extent, citrus tangerine like notes, but there is also some stone fruit apricot smells too alongside Nelson's hippie armpit weed. Nice.

Pronounced sourness, but in a clean way, this isn't neglected barnyard and 5 year old horse blanket, its a clean, fruity sour, probably a 7 on the 10pt wild ale sour scale. Keeps dropping mango, papaya, apricot throughout. Not overly acidic, well carbonated. Even at 7% it drinks with no effort. I'm not sure what makes this a wild ale as opposed to a sour ipa, but they describe the same thing. This is definitely one of the better ones, albeit more expensive than when they are branded ipas instead of wild ales. Wood is largely absent beyond the white grape impression.

At the $10 price point, these were an easy pickup.