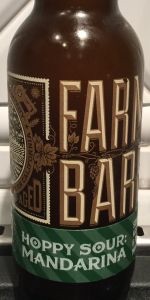 Pours a murky yellow-orange with a foamy beige head that settles to wisps of film on top of the beer. Small dots of lace drip into the remaining beer on the drink down. Smell is sour with grain, citrus fruit, citrus juice, white wine, and acidic aromas. Taste is much the same with sour citrus juice, white wine, and buttery wood flavors on the finish. There is a mild amount of acidity on the palate with each sip. This beer has a good level of carbonation with a crisp mouthfeel. Overall, this is a very good beer that is tasty and easy to drink.

these keep coming fast and furious right now, a new one every couple of weeks it seems. i keep trying them, this one on tap at falling rock, but they keep letting me down. im starting to think two things. one, the base beer isnt all that great. overly raw and thick and wheaty and dense. two, that this new fangled mandarina bavaria hop just isnt all that good. i liked it in the ska beer, but that had citrus in it too, and buy itself, i think it needs a more delicate beer than this one. its too much acid, not enough funk, too much body and yeast, not enough nuance. the hops are good, but its not that different than the others. if i had this one first, or out of the context of the others in the series, i would like it more, having it with this full series perspective, its just another ten dollar beer that lacks the special quality i expect from almanac. not a bad beer at all, still delicious really, but i dont think its the proper base beer to showcase these hops, and it needs some tweaks to be at the level that would match the price point. in the old days, i would rate this against all beer that exists, and it would score highly. now, it demands to be rated against the best in its field, and its not there...

2-18-16 - My first Almanac on tap at The Blind Tiger on Bleeker in NYC. Book me a flight to SFO!!! Cloudy with little head due to short serve Li'l bit o' sour fruitiness on the nose and first short glass. If this is all Almanac has for me, sign me up!!!

Appearance: A slightly hazy golden colour with a one and a half finger white head that dissipated fairly quickly while leaving only sparse lacing.

Aroma: Sour and tart orange and lemon with a hint of mango.

Taste: It’s what you’d expect from the aroma. Starts sour with tangy orange, lemon juice, unripe mango and peach. This is followed by hints of white wine and woody oak notes.

Mouthfeel: Medium bodied with moderate carbonation and some quite strong but nice acidity.

Overall: The citrusy fruits were expected from the Mandarina Bavaria, but I was pleasantly surprised by the unripe-ish mango sourness. Nice and refreshing from Almanac.

Great smell and taste of mandarin, not as sour as I would have liked or as I find typical of Almanac beers but still good and drinkable.

Another really solid offering from Almanac. All of their sours have a tendency to taste similar, but the new hoppy sour series has been really surprising. Lots of tartness offset with some good bite from the hops.

A: Golden yellow, hazy, with a thin white head that has adequate retention.

T: Citrusy, tangerine hops, open up to a moderately strong sourness, light breadiness on the finish.

M: Medium bodied with moderate carbonation. There is a moderate, but pleasing acidity on the palette.

Hoppy Sour: Mandarina from Almanac Beer Co.
Beer rating: 91 out of 100 with 92 ratings