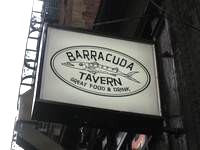 I happened upon this spot during my latest visit to Boston. It is kind of hard to find as it is located on kind of an alley but it is close to the Commons.
You walk up a flight of stairs and you see the L shaped bar which seats about 12 and then off to your right are about 10 to 12 tables. There are some TVs so it is easy to catch a game. Not sure why they had the Philles Yankees game on in Boston : )
They offer about 10 drafts and maybe 50 bottles and cans. The drafts were not working while I was there but I had no problem picking out some local offerings from their beer fridge.

Service was very friendly and our bartender was able to point out some beers that were so new they were not even on the beer list (including a NEIPA from Harpoon and nice local Dunkel).

The food was just ok, some local dishes and the usual bar fare.

Considering it was a Monday evening, I would say the crowd and the atmosphere were good.

I've been coming here for lunch for some time now and have been pretty pleased with this place. It's located on a second floor on a small street in Downtown Boston so it's off the beaten path. Very few tourists are in here and that's a good thing because it is a small place.

The place is usually pretty clean and well lit by natural light in the afternoons. I've been here twice after work and it becomes more of a typical bar scene with dim lighting. There is a lot of nautical decoration and theme going on here. A couple of table tops and a couple of areas for larger crowd seating and of course the bar.

The service is usually pretty good here. Not slow but at lunch there is only one person tending bar who also tends to the tables and if it's a busy lunch day it can slow down.

Beer selection here changes up in terms of taps. They have the usual bar fare taps but also have a few local craft places that they rotate. They have a decent bottle and can selection as well so you're not stuck drinking Sam Adams or one if its seasonals. At any given time you can find up to 20 different craft selections here aside from the macro offerings.

Food here is awesome. They have daily specials such as Taco Tuesday, Wing Wednesday, and Sunday brunch. Oysters are specials here on Sunday and Mondays. Food is always made fresh to order and is never bland. The menu offers traditional pub fare as well as pastas and seafood specials. They also server tapas great for table munching.

If you're in the area swing by and try it out. It's a nice little place and a good change of pace when you're tired of the same burger from the same bar.

This is a fairly new place that was vacant for quite some time and opened fairly recently on a little alley type street between the Nine Zero hotel and Cafe Marliave.

It occupies the 2nd floor of the space and it is pretty small. The bar seats maybe 8 people and then there are a number of 4-top tables in the more restaurant type section of this space. I believe 45 is the total capacity so it can get crowded in here pretty easily.

When I saw the taps, I was quite unimpressed and even thought it was surprising that it had been added to the BA database. The selections were nothing more than readily available typical tap offerings like Guinness, Harpoon, Sam, etc. After ordering a Guinness draught, I saw the chalkboard and saw DFH Witches brew on there and it says 3,5. I thought this meant it was $3.50 and I said--oh I'll have that and I was then in formed that it was $35 for a bomber bottle and I opted for something different instead.

The bottle selection is where this place gets a lot more creative in their beer offerings. They had the black session lager from Full Sail, a few different DFH, Smuttynose, Fishermans, Chimay, Ommegang, etc. I believe I even spied a bomber or 2 of Jolly Pumpkins , so their bottle selection was actually waay better than their draught offerings.

The bartender was quick enough and fairly friendly and attentive. I didnt try the food but was told by a couple friends that I happened to bump into there that the food was quite good. Its chef-owned so that usually ensures that the food will remain good even after they've been open for some time.

Barracuda Tavern in Boston, MA
Place rating: 3.76 out of 5 with 4 ratings