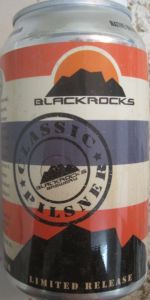 Appearance: This beer pours a beautiful gold color with a nice white head that lingers but on close inspection it is a little cloudy.

Smell: Like a good lager, heavy on the malt but there is definitely a stronger hops pine undertone.

Taste: It is a nice crisp lager but with a little more hop bite than your average lager.

Mouthfeel: This has a lighter feel which is expected from the style.

Overall: This is a winner. It is too bad that it is a limited release (and probably only the one time). It is exciting to see Blackrocks coming out with seasonal in cans.

Exceptional in all areas

"The finest German malt, American hops and Lake Superior water collide to create our take on the worlds most popular Style. As crisp and refreshing as the Great lakes, this beer is a nod to European tradition with a distinct American disobedience. Prost, Eh!"
30 IBU's, 5.5% ABV.

Pours out to a crystal clear medium golden, forming a nice white head with very good retention and solid sheets of lacing. 12oz can. Nose is quite nice, clean ferment with just a hint of sulfur, perfumy floral hops and freshly mown hay. Mouthfeel is crisp, clean, medium bodied, very easy to drink. Medium carb, ~2.5 carbs or so. Bright acidity. The taste is quite nice. A little grassy, perfumy, lemon pith, table cracker, light but well balanced bitterness. No off flavors, or aromas.

Very nicely done local pils. Would recommend. A nice example of the style without any faults.

An excellent and always enjoyable Pilsner. Smooth with an excellent balance of sweet malts and spicy hops. Flavor and texture is slightly on the larger side. Very well crafted.

Very clean on the palate, with little of the overdone earthy sweetness that ruins many a pilsner. Still focused on pils malt, with a slightly earthy, honeyed sweetness, and very lightly bitter with grassy hops. Slight peppery spice.

Clean and smooth on the palate, a touch oily.

12oz can served into a willi becher glass. Pours a clear golden yellow body, one finger thick white head, fair retention, not much lacing, thin collar. Smell is bready, floral and a touch of lemon, with mineral. Classic dough and floral notes. Flavour is a clean bready malt with a touch of sweeter biscuit, light floral notes, even a touch of citrus. Clean and flavourful pilsner, no off-flavours, really quite nice. Mouthfeel is medium-lighter bodied, good carbonation, ridiculously flavourful with a nice mildly floral finish that imparts a mild lingering bitterness. Very clean, crisp and supremely drinkable pilsner. Enjoyed this a lot.

I picked up a can of Blackrock's Classic Pilsmer for $1.79 at The Lager Mill. A Pilsner is sounding pretty good today and I'm interested to see what Blackrocks can do with the style. so lets see how it goes. 2016 Vintage. Poured from a 12oz can int a Pilsner glass.

A- The can looks nice, it's got a nice design to it and it's just a little eye catching. It poured a fairly clear golden yellow color which took on more of orange and gold color when held to the light with almost two fingers worth of creamy white head that died down to a thick ring that stayed till the end and it left some nice spotty lacing behind. This is a good looking Pilsner, I have no complaints.

S- The aroma starts off with a medium amount of sweetness with a distinct English ale yeast aroma being the first to show up with just a slight smokey aroma and it's followed by the malts which impart a bread, grainy and pale malt like aromas. Up next comes a slight doughy aroma that goes right into the hop which impart a light herbal and grassy aroma. This beer has a nice aroma, but the yeast and slight smokey aroma throws me off a little.

M- Fairly smooth, a little clean, crisp, light bodied with a medium amount of carbonation. The mouthfeel is pretty nice and it works well with this beer.

Overall I thought this was a nice beer and a nice example of the style, it wasn't a bad beer by any means, but it seemed like the yeast threw it off balance and in the end that's what held this beer back. This beer didn't have the best drinkability, one is enough for me, I easily got tired of the overpowering yeast. What I like the most about this beer is the appearance and mouthfeel, they were nice and the highlights of this beer. What I like the least about this beer is the yeast, it was just too dominating. I don't think I would buy this beer again and I can't say I would highly recommend it either, but if you like a strong English yeast flavor it might be worth checking out. All in all I didn't hate this beer, but i didn't love it either, it kind of fell right in the middle and it's not really up to the level that most Blackrocks beers are at. It's one of my least favorite Blackrocks beer and it's just a little above average for the style. Better luck next time guys, this beer could use some work on the balance.

German pilsen malt is the star here... and the appearance and mouthfeel of this brew are top notch. Easily sessionable and easy to kick a few back. This pilsner needs to be added to their permanent lineup.