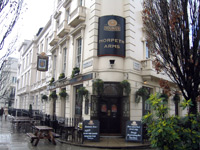 Cracking London Pub this. One of the best Young's Houses in the Capital. A corner pub that is situated near the Tate Gallery, but more recognisable by the fact it is in the shadow of the MI6 (James Bond and all that stuff) Building on the other side of the Thames at Vauxhall which is the closest Train Station, with Pimlico being the nearest Tube station by the way.
This Pub has it all, purposely designed in 1845, etched and cut-glass windows, carved wood abounds, and its all genuine. A real Boozer, reasonably quiet (i.e. no loud juke boxes), that welcomes both Locals and Tourists alike.
It's best trait though are its beers. Usually serves 5 Cask-Conditioned UK Real Ales on Handpump. Young's Bitter, Triple A and Special, Smiles Best and at least One Guest Beer. A great selection of Cask-Conditioned beers kept in extremely good condition. This is the place to drink Young's Bitter, don't be fooled by the Special - but try it by all means.
I remember well an afternoon in here with the 'locals', a gallon of Young's Bitter and never wanting to leave.
Serves Lunch and occassionally Evening Meals.

N.B. I am not sure if the web-link is the "official" website, but it gives some further historical background of interest.

Nice Young's pub on the Millbank area of the Thames. A short distance from Vauxhaull bridge and Pimlico tube station. A nice 10 minute walk or so from the area of Parliament and Westminster Abbey. Wood panelling throughout and a nice snug that's supposed to be non-smoking but sure wasn't when we were there. Seems a popular place and the Young's line seems well tended. We did not try to the food but the menu looked good and varied. Excellent place to visit and a must for lovers of real ale and a real pub.

I stopped in the pub after a long walk along the Thames. It can more easily be reached from the Pimlico tube station. It is located within sight of the Vauxhall bridge over the Thames.

This is a nice, traditional pub with old style carpet, etched glass windows, old framed pictures on the walls, etc. The interior is not large (smaller than the Lamb on Conduit St., though with a very similar beer selection).

I counted 15 taps and 5 or 6 hand pumps. The taps serve mostly Young's products (including Young's Pilsner and Export Lager, as well as the Bitter, Waggledance, Winter Warmer, etc.), but also Stella Artois, Foster's lager, Guinness, and a cider. There was a good selection of other Young's beers in bottles plus some malternatives, wine, and liquor.

The service was decent enough, though they wanted to charge me for a pack of matches, which turned out were simply Young's Brewery matches. I didn't have the opportunity to sample the food, but saw many customers having their lunch and enjoying it (traditional pub fare with soup and sandwiches seemingly the most popular lunch items).

A good, solid English Pub with some character.

Morpeth Arms in London, GB2, United Kingdom
Place rating: 4.07 out of 5 with 3 ratings