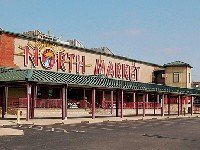 View: Place Reviews
Reviews: 8 | Ratings: 17 | Log in to view all ratings and sort

Located in Columbus' North Market. This is a small bottle shop with a modest selection of wines and craft beers. Quite a few Ohio beers, plus a few imports. They offer a small seating area with a few beers on tap. Enjoyable place to stop for a pour or a flight while shopping the North Market. Recommended.

Decent little selection, if not for being overpriced on their single bottle selection. 5 taps for the size of the establishment is impressive, however overall, a huge let down. When I read this won readers choice in the Columbus Alive for best beer selection I was quick to realize upon first admittance that was due not to the variety, but the superficial value of being seen shopping in the North Market.

Hanging around for a bit I heard lots of talk but none about beer. Everyone shopping and working seemed more concerned about being noticed they were there, for appearances sake, which was lost on me.

I get that lots of folks don't enjoy travelling more then a minute to their beer store, but with selections the likes of the Kenny Road Market or a Whole Foods offer, there is absolutely zero reason to ever stop by the Barrel and Bottle, unless casual drinking is your thing.

In the North Market. They have it set up now that you can sit and have a pint, and eat even from one of the vendors in the market.

Selection is great, a little small but all quality selections. You can do growlers. Worth checking out!

I used to visit the store that was here in the North Market before The Barrel & Bottle when the wife and I lived in Columbus back in 2010. That first iteration closed abruptly in 2010, and The Barrel came along.

Fast forward to 2014 and here I am, back at the North Market. The beer joint is still small and chock-full of bottles and stuff, but damn there is so much quality around. They also have five beers on draft for growler fills: Columbus Bodhi, Mad Tree, Jackie O's, Weasel Boy Barrel Aged Raunch Wiesel (smoked porter), Seventh Son Coffee IPA... they offer tastes of their draft brews for one dollars, love the idea!

Among the bottles, I saw Hof Dormaal Barrel Project, Alesmith, Mikkeller, Rockmill, Two Brothers Bare Tree, Four String from Columbus... most beers are room-temp but there is a small cold.

Can't go wrong with this place and a stroll around the market! Oh, and dollar off growler fills on Wednesdays...

The Barrel and Bottle at North Market is a nice little shop that will turn into quite the sojourn especially if you've never visited the Market.

Walking into the small shop you immediately notice that the place is bursting at the seams so much that it spills out into the neighboring vicinity. This is awesome and shows that they attempt to maximize their space.

The selection is decent and caters towards the high end of beers (and I assume wines, but have no idea) as well as focusing on the locals. Prices are fine and along the lines of any other shop in town. Don't expect a beer mega-store as the space is limited here.

One awesome feature is growler fills. They have two taps that they rotate out (when I was there it was Columbus Brewing's Bodhi DIPA and Breckinridge's Imperial Stout). They counter-fill so I am a huge fan because of that.

One final awesomeness about this shop is the fact that they (at very unpredictable times) get some Jackie O's beers and they are indeed the only shop in Columbus that does so.

This place took over the spot of Grapes of Mirth which closed recently in the North Market. It is run by the same person who co-owns Bodega so he has a good head and contacts for beer. The layout is much looser than the previous place, but that cuts down on the theft problem the other had. The cooler section is larger and well rounded with the selection. They have two beers selected that are in kegs for tasting and they have growlers to take the beer home. If there is something you want, he is pretty good about getting it for you. They are of course limited by the space allowed in the Market and the hours reflect that as well. But a welcome addition to the North Market.

Located at the North Market, this is fun place to check out to grab some lunch, crazy groceries and some good beer. The store is very small, actually probably too small, while I was there 10 people in there made it quite crowded. This place has about 50-50 beer and wine. The beer selection is pretty decent, I was mostly there just to pick up some Jackie O's. I didn't see anything else that I cared about trying, decent stuff nothing crazy. However, I was there right after it opened, so it could have improved by now. 2 taps for a growler fills but that wasn't working yet. The owner was there, seemed nice but pretty busy to really talk a ton to. Pricing was pretty decent.

I wouldn't count this place as a Columbus destination. However, would come back just for Jackie O's (can't imagine that will happen again if ever) or if wanted to do some fancy grocery shopping.

Taking over the spot where Grapes of Mirth once stood is Barrel and Bottle. Owned by the same Guy who brought you Bodega, one of the best bars for craft in town, this place has promise.

They use the small space better than the previous owners. It is an open floor plan with only a couple small island shevles. Most everything is around the walls with a big display just outside the threshold. Nice barrel inspired lighting fixtures hang above.

The store is proabaly about 50% wine 50% beer. Possibly slightly more beer. Two taps for tastings rotate but they have been working through red tape over the issue of Growler fills since before November. But imagine Bodega's selection of limited and draft only beers available for Growler fills. I'm very excited to see this in full effect.

Bottles are pretty strong but there isn't the biggest selection, mostly due to space. They have had a bunch of Jackie O's which came from Bodega/Jackie O's connections. Very nice to see. Recently I've spotted cantillons that I've not seen elsewhere.

Prices seem on par with the rest of town. I was surprised to see some cantillon at $11.

The place may be cramped and North Market is sometimes a bitch, but once these growlers start filling this place will be a gem.