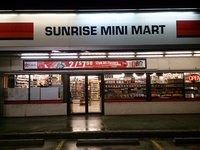 Good selection of craft beers. A good place to explore and discover something new or unusual. I went looking for a variety of IPA's for a weekend of tasting and was a bit overwhelmed. It was difficult to pick just a few. They also have ciders and wines if you are into that stuff. The usual convenience store candies, munchies and ice cream snacks. It is a gas station with a beer fetish.

Yes this is a gas station mini mart in not the best neighborhood in Austin, but the selection and quality are excellent. The service is good and the clientele is varied and fun. A great place to bottle shop in Austin where you don’t have to worry about downtown traffic and parking.

My first visit was as a craft beer virgin, and I was blown away, especially since the exterior is SO unassuming. Since getting to a few different places -- from Goliaths like Total Wine to even smaller gas stations like my local, super rundown-looking Chevron, to a range in between -- I often have to look elsewhere to find elusive items.

Also, while the staff is by no means unfriendly, I kinda feel like just another schmuck when I go in there (as opposed to, e.g., that Chevron I mentioned). Still a must-stop place when I'm on the prowl, and will always get all the most sought-after stuff, but it's so well known, you have to be quick to get some stuff when it's there.

Definitely competitive price points, and a very good selection for its size, but it's not quite the rarity I thought it was at first. Apart from beer and wine, they have a great high-brow snack collection, like Epic meat bars, organic dark chocolate, etc., some of it a bit too expensive, some nicely priced.

I wasn't expecting much from the outside, but was blown away when I walked in. Great beer selection both warm and cold. The owner was extremely nice and friendly. I told him I was from out of town and even pulled a few reserved bottles from the back for me. There was a rep from Twisted X brewing there with samples. I would highly recommend checking this place out and will be returning the next time I'm in Austin.

Sunrise is about 1/3 convenience store, 2/3 bottle shop (includes beer, wine, craft sodas). Prairie Artisan, Jester King and bottles from new local breweries are here. Their selection is probably 2nd greatest in Austin after Whichcraft, but almost all of it is available cold. They had a 4-pack of Victory Kirsch Gose on the dry shelf that I wanted cold and one of their guys went to the storage cooler and found one for me. Also bought a can of WD-40 and some Atomic Fireballs.

Will blow your mind.... My new favorite gas station. Just an awesome bottle shop that you would never have known about without a recommendation from someone who lives in Austin. Really knowledgable staff and a great selection.

It has the best beer selection in Austin, and the service from Sam and the rest of the crew is always great. The only way we could get a better selection in Texas is by getting rid of the TABC and our antiquated laws.

Sam and the crew really, really know their brews. Sam doesn't even have to look up to point me in the right direction half the time. Always clues me in on new arrivals he knows I will like -- haven't been let down once. You can really tell he's into what he does.

I've seen him take reps from beer companies through the ringer -- there is a big emphasis on not stocking garbage brews here. Always welcoming and helpful.

I love going to Sunrise, when I'm in the area. From the outside it looks like your typical gas station. Don't let that fool you!

Inside it has one of the best selections in the city. I also really like that they are so good about posting new releases on Twitter. Unfortunately, anything even resembling a limited release seems to result in distribution truck chasing and hoarding. So, it's nice when some place gives you a heads up and you can swing by and pick up what you want.

They are a little pricier than your big stores like HEB, Central Market and Specs, but it is a convenience store and I don't mind paying a little more to support the local guy.

Sam is also great to talk beer with, he's quick to help, he's quick to let you know if anything new has come in that day. I haven't been going there long enough, but I have multiple friends he's saved beers for or brought some out of his own stash for them.

Everytime I'm here, someone is restocking the shelves. They do a good turnover and things don't sit around. They get pretty much all the special releases. They are very helpful, too. I like to ask them for recommendations on what's new. They always seem to give me an honest assessment of what they think.

I'm actually most excited about the prices. Some things that you can get at Specs with the cash discount are a little more expensive here, but a lot of the harder-to-find stuff that they could markup quite a bit seems reasonable.

This is my go-to place.

I'm not much for writing long reviews, so I'll be short...

I love this place. Great selection, Good prices and awesome service (Sam is the man.)

In my opinion they have a better selection than Whip In and it's so much closer for those of us stranded up North. The only advantage whip in has IMO is the bar.

Either way I love this place.

If you want a testament to the quality of service you get here. I had talked to Sam about holding a bottle of a beer I really wanted to try when it came in. By the time he got there the bottles had already sold out, so rather than say Oh well, he brings in a vintage bottle out of his own cellar and sells it to me for the same price ^_^.

Sunrise Mini-mart is the hidden gem of the Austin beer store scene. The selection is always excellent, and they get new releases within a day of, if not sometimes before, anyone else in the ATX. Jester King, Adelbert's, Austin Beerworks, new Lips of Faith and Stone collaboration releases...that's just the tip of the iceberg of course.

Prices are reasonable--the mark-up is a little higher than Spec's and Central Market but a dollar or two cheaper than Whip-In or Hyde Park Market. Freshness has never been an issue, as they seem to rotate through their stock on a regular basis.

The reason I don't mind paying a little extra to shop here (besides the selection) is the staff. The main guy behind the bar (Sam) looks out for his regulars, is always willing to talk shop when they're not crowded, and does a killer job at keeping Sunrise's Facebook consistently updated.

I'm fairly new to the Austin area, and was mildly disappointed by Spec's despite the relatively good reviews. In my search for a local stop that was more to my taste, I decided to check this place out even though there was only the one review and the name was less than glamorous. I'm glad I did.

To be blunt, this place is a gas station, and not too unlike any other small gas station you are likely to come across in regards to decor. When I pulled up I actually sighed before I spotted the cases in the window and got interested. It turns out they reserve the window area for craft/microbrew soda, however, so no worries there. Inside, it's not too flashy, but they've got 40 or so feet of wall coolers stocked with mostly craft brews, along with another couple 20 foot aisles of sixers and bombers. It's not as crowded as some of these locally owned one-off stores get, but it's still a gas station. They've also got the obligatory corner store snacks and soda as well as a wine aisle.

Being new to the area, I'm not really sure what is rare around here, but they had most of the usual culprits (DFH, Ommegang, Lagunitas, etc.), as well as a large number of local beers and things from such exotic (to me)locales as Colorado, Wyoming, and Oregon, so I'm guessing they have most of their bases covered. Pretty good stock of large-format Belgians, imperials, and all-around intriguing brews. Several Avery and Jester King bottles caught my eye, but I settled on a Boulevard Tank 7 and a four-pack of DFH Paolo Santo. I felt that the selection was quite a bit better than Spec's Arbor Walk and I didn't have to wade through tons of macrolager to pick things out. Didn't see a mix-a-sixer area anywhere.

The guy at the counter was extremely friendly, complimented our choices, and offered some advice on other things to try if we enjoyed them. There was actually a bit of a mix-up with the price on one of the purchases, but he was exceptionally courteous and refunded the price difference after the transaction had been completed (and I had actually left the store) without any hassle whatsoever.

Prices are average, about what you would pay at Spec's or HEB before discounts. They do seem to carry quite a few more expensive beers, though, so I can definitely see myself unintentionally spending more than I would at either of those places.

In conclusion, I'm quite glad I stopped into this place, and I'll definitely be back, and often. Highly recommended.