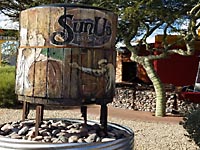 I was looking forward to this trip since non-chain brewpubs are too few in the Phoenix area. This place is located in a stand-alone building (a refreshing change from the ubiquitous strip mall) and has some pretty cool decorations as well as a nice cozy interior. I ordered the Southwest Philly cheesesteak wrap which was a little spicy and a lot awesome, and my wife ordered the Turkey Club (hard to mess up). Service was great, it was a Saturday night, and I never once suffered empty beer syndrome. Now to the good stuff. The selection of beer styles available was pretty standard. I started off with the Hefe, which was flavorful and quite good. Next I had the IPA , which was cask conditioned and hand pumped. Loaded with citrusy cascade hop flavor (as advertised), it was very flavorful. This one could have benefited from a little more bitterness. After the IPA I ordered the Pilsener which was hoppy and refreshing yet lacking the Pilsener crispness, but since this style is probably nearly impossible to nail, I can't complain. Finally I ordered the sampler (cream ale, pale ale, amber ale, IPA(not cask), wee heavy, vanilla porter) so I could try everything. The pale ale, IPA, and amber ale all tasted very similar to one another. Getting rid of the (yawn) amber ale (the cream ale is a great gateway beer for new craft drinkers) and focusing on making the IPA and the pale ale distinctive from each other would really improve the beer selection. I know brewpubs have to get asses in the seats by giving people what they want, but I felt like they were playing it a little too safe as far as their regular tap selections. Well, it is 114 degrees and that is definitely not 9% hop monster weather anyway. Great place, and I definitely look forward to returning.

Brewery is a converted auto repair shop, with pub tasting room in adjacent building. Place is played out kinda weird with 2 bars and dining rooms. More than a dozen beers on tap, the 2 I had were good. Friendly server. Food was tasty, but also pricey.

Sun up has a nice, small taproom-type vibe. There's seating for about 8 at the main bar and about 7-10 booths with larger tables outside and another bar adjacent to the patio for overflow which offers opportunities to speak to the brewers occassionally. Bartenders are very friendly as well as the regulars. The beer selection is somewhat limited but tasty. The food is so-so. They also make an excellent root beer worth trying.

SunUp has two small bars, one classic brewery bar with view of the brewery through glass, the other rather midwestern in feel, with primarily southwestern menu items. The selection of SunUp beer in draft is broad, and the primary draw, White Russian Imperial Stout, is unusually but wisely available year-round. A few canned beers are available for take-away.

White russian is an amazing imperial stout! Creamy chocolate with a touch of espresso in the finish.

Meso Happy IPA and Hair of the Monk with Cherries Belgian Trippel were awesome.