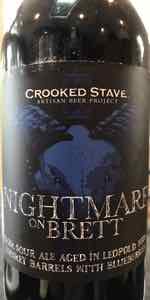 Reviewed from notes. 375 mL bottle purchased locally in February 2017. Date of consumption not noted, but I don't believe it was too long after purchase based on location within the notes. Poured into a J. Wakefield OG teku glass.

S: Lemony citric acid, milder acetic twang, and modest bourbon. Some roasted malts with a light chocolate aroma, some lactic tartness and milder Brettanomyces funk. A light berry fruitiness with oak dryness and tannins, which lends an almost vinous aspect. This has a very complex and interesting aroma. It's appealing in its own way, though it doesn’t seem focused…but I still like it.

T: Mixed lactic and malic tartness. Still a touch of acetic acid mixing with the roasted malt body. Lighter notes of chocolate and tobacco and a mild-but-clear roast bitter character. Bourbon, oak, and Brett funk – basement and old books. Sour lemons and citric acid. Some vanilla from the oak mixes with the tart underripe blueberries. More lactic sour and another punch of funk near the swallow, then lingering berry fruitiness - but stays fairly dry in the end.

M: Medium-bodied, carbonation sensation maybe a touch on the low side. The alcohol is obvious but far from hot for anything barrel-aged.

O: Really an interesting combination of flavors here. The roasted malts, Brett funk, bourbon, and sour didn’t necessarily seem like a good idea to me, but they pulled it off. Very complex but the brewers somehow managed to corral all the characters and get them to play nice with each other, keeping the flavors in balance. Really quite tasty. I would do this again for sure.

Sweet and tart blueberry with a hint of whiskey/bourbon nose on this one! Taste follows with a mildly acidic, blueberry tartness on the finish...grabs the back of the tongue a bit! This has nice depth and feel to it and hides the ABV really well. This is really good!

As I poured it I wasn’t sure if I had a stout or a sour it’s so dark. It’s thin as a regular sour should be (compared to a stout) so it works. I can smell the sour and a bit of the bret, but not the blueberries or whiskey barrel. Tasting it though, the blueberries do linger on the end and give it some nice complexity. It is pretty tart, so be prepared. I don’t taste the barrel or alcohol either. I’m enjoying this immensely, but wonder if it would have been better fresh with more blueberries and barrel character. I’d buy again and would try the other variants.

So a brett ale with blueberries is interesting, but then aged in a whiskey barrel really adds another dimension of intrigue. Very dark brown body with a light brown collar. Aromas of barnyard funk, brett, blueberry in a dark sense, balsamic vinegar, molasses, oak and prune. More pieces than a cohesive whole. The taste brings unity of these same flavors, add some soil and hints of vanilla now too. The darkest complexion of a brett beer I have ever had, chewy, warm, thick, and boozy. Great balance and smooth

I know it's written on this page it's ''retired'', but I just got chance to drink it on tap in Beertemple in Amsterdam.

It looks opaque black with small tan head. No sparkling bubbles.
Aroma is blueberry, barnyard, roasted malt and slight wood.
Taste is amazing! What a complexity! Like a mix of half fruity lambic and half sweet stout. Very delicious fruity and acidic sourness with some wood and roasted bread.
Medium bodied. Soft carbonation. Warm and softly puckering finish.
Very easy to drink despite sourness and high abv. One of the most delicious beers, I really love it.

Nose is interesting in that there is a light wild ale sour note, but there's also a roasted note. That roasted note, however, is transformed and has an oaky to lightly vanilla aspect to it. Behind this is a lightly sweet waft of blueberry, one that I might not have discerned were I not looking for it.

The nice balance of the nose is lost in the taste, unfortunately for me. The almost stinging tartness makes my tongue buckle briefly. No roast, but a hint of the barrel aging buzzes overtop of the sourness. Even looking for blueberry here, I can only come to the realization anything I get I'm trying to find.

If the taste mirrored the nose a little more, this could be a wonderful beer, I think. Maybe the extra time didn't help, but there just isn't enough nuance in the flavor.

Moderate to vigorous pour yields a 1/2 inch pinkish tan head over a very dark purple body. Nose of blueberry, slight strawberry, and brett funk. Taste of sour blueberry with a bit of tart apple. Nice feel and overall a definite must try for all sour beer fans.

12oz bottle dated January 2016 poured into a Teku glass
A: Pitch black with a lingering one-finger tan head
S: Very complex with blueberries, brett and dark malt
T: Matches the nose, quite sour with a bit of brett funk
M: Medium-bodied, sour
O: Pricey but delicious. Very complex, the alcohol is completely hidden; stay away if you don't like sour/funk but if you do this beer is great

Bold yet delicate. Fruity but firm. Acidic but soft. Winey but peppery. As soon as you think that one side of flavors becomes too much, the Crooked Stave beer makers quickly balance the beer with a calmer and soothing counterpart. It turns out that their Nightmare series is the stuff of dreams.

Nightmare on Brett Blueberry comes with a dark garnet, brown and maroon appearance. Quite hazy and short on foam and lace, the beer quickly turns to wine like impressions. And those characteristics continue as robust bordeaux wine rolls onto the nose along with copious blueberry perfumes along with a tinge of balsamic, peppercorn and tainted cork. And those fruit filled flavors slather on the tongue with wine soaked blueberries, blueberry cobbler and a supportive toasted malt undertow.

As the flavors unfold on the middle palate, the sweetness slowly retreats and the fruit and wine continue their dominant trek. Laces with red wine, balsamic, peppercorn, toast and a trinity of cider, citrus and green berry, and then the balance turns purely clean and acidic. Finishing with dark and weathered woods, a tannic nuttiness persists and brings with its the spice of whisky to blend into sourness perfectly.

Medium bodied for sour ale, the beer's lingering maltiness continues with pastry and cobbler although completely dominated with sourness, fruitiness and spiciness. A medium length after palate of fruit, red wine and oak carry a late and briney savoriness.

Poured a super dark brown, I really thought this was a stout with blueberries at first glance. The nose told me otherwise. Huge acid profile pretty much squashed the stout perception and prepped my for the sour onslaught to follow. Very strong initial sour flavor that make way to a very slight berry finish.

Pours an oaken brown with minimal khaki lacing around the edge of the glass. Nose matches the standard Nightmare (see review) but with a decidedly prominent fermenting blueberry note. Again, similar to the standard, but the gorgeous blueberry undertones also further accent the woodiness of the base beer. Beautiful, medium-still mouthfeel. Exceptional.

Aroma- Sour hits as soon as its poured into the glass, woody

Overall - Great sour Just bring some tums for after!

Pours a deep dark purple indicative of the blueberries used. The aroma is tart and funky intermingled with the sweetness and tart of the blueberries it was aged on. The taste is much the same. Tart, sweet, funky with a little bit of booze bite. Delicious.

Deep purple. In low light it's basically black. Little head but does have active carbonation.

Aroma is loads of blueberry and vinegar. Brett is apparent.

Whoa. Super acidic and sour. Excellent use of blueberries.

Puckering and punishes the palate like sucking on a handful of SPKs.

Great wild. Definitely one to seek out.

i swear i forget how sour this beer is every time i have it or one of its (now many) variants. there really is a ton of acidity, and some of that flanders red type vinegar to it as well, very intense, especially at this abv. this blueberry edition is great. crooked stave must have gotten a lead on some blueberries, because in the past few months there have been three or four beers with them, all fantastic. this has a little extra purple color to it, but mostly looks like normal nightmare. the aroma is still very much the original, the blueberries impart a slight sweetness, mild red wine character, and a sort of generic berry element, but arent as pungent and defined in the aroma as they are in the flavor, where the tang of the fruit accentuates the tang of the base beer, and the sweetness they bring cuts the acidity just a bit. they seem concentrated and muddled and fully released here, bringing a new twist to this classic without taking it over and making it lose itself to become a fruit beer. insanely sour still, highly tannic, sharp, acetic, but bretty and funky and mature and rustic too. the best of all possible worlds it seems, and while other fruit versions of this one may have been more dramatic, i like a lot what the blueberries bring here. another wonderful beer from one of the best breweries in the game!