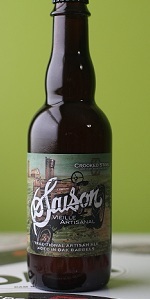 Tried this at the flight for Crooked Stave beers at Trappist Provisions. Poured out of a 375ml bottle into a wine tulip glass. Review is from my notes.

Pours an amber sunrise cloudy color with a nearly bone-white head that is slightly frothy in character. Bubbles are popping all over this at the top, almost to the point where I can imagine wild bacteria scrounging around and swimming in my beer. Other than that, carbonation is quite excellently balanced, in the same realm of other world-class saisons. Lacing is good, and the residue left behind is pretty rustic and pleasing. Very intriguing looking stuff.

The aroma is totally nuts, however. In the same realm of beers from Fantôme, this has got to be one of the most rustic, funky, pungent saisons I've ever whiffed on. Notes of cheese rind, brown grass, smoked lemons, seaweed, musty oranges, moist straw, toasted white oak, and granite immediately fill my nostrils, to the point where I simultaneously love and kind of hate this thing. There are no immediate flavors here that resemble beer ingredients other than the toasted dried malts and slightly skunky grassy hops. I'm definitely giving it high marks for being unlike anything I've had but I'm yet to try it.

Right at the first sip, the palate is immediately coated with a combination of dried oaky notes, toasted dried malts melded with peat moss, and slightly dried brown grassy flavors. This, in a way, resembles the ill-fated bottle of Fantôme Printemps that I had a while back, but it is far less bizarre and definitely more drinkable. Nevertheless, the toasted malt/peat flavor does get a bit grating to me, and as it warms up, it gets substantially smokier. The aftertaste is very tobacco-y, and while I tend to enjoy that, the smokiness is a bit too much, and the notes of algae and dandelions that creep in get a bit too vegetal and oppressive. Not necessarily refreshing, but this drinks quite well. Bready, yeasty, and slightly creamy from the oak. Definitely a well made beer, but the flavor profile is rustic to the point of being a bit challenging.

I admit that peat/smoked malt combos are not my favorite thing. The oak is a major factor that makes this a deal-breaker from other beers of its kind, as are the grassy hops used in the recipe. It's astonishing that more breweries in this country are replicating recipes that are hundreds of years old from Old World beers so well, and Crooked Stave is at the forefront of that movement. Still, this was my least favorite in the flight, and I wouldn't revisit it any time soon.

375 ml bottle. Pours hazy straw yellow with a medium creamy white head that goes to a thin film that laces the glass.

The aroma is funky bitter piney sourness with a little bile.

The flavor is light straw like malts and a little fruit with some brett and a dry medium bitter finish. The mouthfeel is medium to full bodied with low but prickly carbonation.

Overall, a nice lighter beer. I like the saison, brett and hop interaction.

Bottle from a trade with Mitch in Colo.

Semi-tart lemon infused nose, with some earthyness and chilled butter also in the mix.

Refreshing and lemony brew. Slight sour note adding to the complexity. I also get some light pepper, some musty earth character, and a dry leafy hop finish. Hell yeah, more tasty and finely crafted beer from CS. The more I try these beers the more I like em. Gonna need to set up another trade with good ole Mitch....

Straw gold with a generous skim of white foam across the surface, rapid trails of rising carbonation visible in the glass.

Funky traces of Brett yeast in the aroma, minerals, wet hay, and a wisp of sulfur oddly.

Thanks Joe for sharing this one!

Farmhouse aroma, a bit butyric at first. Softens up a bit as it opens, to more floral and grassy. Some wet hay.

Flavors are not as pronounced as some modern day saisons. The spice is light and it doesn't seem like anything else is added in the spice area. It seems rather simple, but quite complex. Very light biscuit underneath. Some floral and perhaps lemongrass.

Tingly, but not heavy on carbonation. A zing at the end, which is quick and refreshing. This one is growing on me. Very drinka....crap, it's gone

375ml bottle $5.99. Bright orange color, big head, crusty lacing up the sides of the glass as I drink it. Hint of orange in the aroma, pepper and spice, pretty good. More citrus in the flavor which is good but the flavor is fleeting. Extremely easy to drink and likely a good summer beer. My only complaint is the cost. American saisons always seem to cost more that Dupont and are rarely better which means no repeat purchase.

Saison Vielle Artisanal is a slightly hazy amber orange color. The head is fizzy and quick to settle leaving little lacing behind.

Aroma is unexpected but enjoyable. I've had some Crooked Stave beers before so I should have known it would have a wild side. Slightly sweet with tropical fruit and slightly sour with wild yeast.

Flavor is our but balanced. It has a light and mild malt bill so that the yeast can really shine. Mildly hoppy as well with spicy peppery saaz, if I'm not mistaken. Yeast lends a tart and sour flavor that is very well done.

Mouthfeel is light in body and nicely carbonated. A relatively easy to drink wild ale.

Overall a very well made beer. In most ways it's not what I would consider a saison but, knowing a little bit about Crooked Stave, it totally makes sense.

Shared with my wife while watching old school Star Trek.

Served in my Crooked Stave glass. Thanks Josh!

The beer is golden with a half inch of white head. The aroma brings funk, grass, yeast, earthy grains, sweet fruits, light spice, citrus. Lovely. The flavor follows suit, with a nice, lip smacking pucker in the finish. Earthy and bready. Pretty light in body and a pleasure to sip.

Pours pale golden yellow and cloudy. Medium small head, white. Little lacing and not much retention. It definitely shows off the barrel/sour angle. The aroma is underripe stone fruit, lemons, apples, mild funk and pale grain. Lots of stuff going on for a 4.2% abv beer. There's a touch of vinegar and lacto yogurt - you can definitely smell the sour in this beer. Very good brett flavors knocking around with the stone fruit and funk. The taste is lightly tart with more of the same flavors in the aroma. Nice balance of sour and brett funk. It's a bit simple on the palate. Some of the fruit seems a bit washed out, but the grain is light and fresh. Probably tends a bit more towards the lacto yogurt side of sourness. Very clean flavor with a solid lightly bitter oak note. Medium tannic from the wood. No idea what kind of barrel was used, but I like it. Not picking up much from the dry hopping, maybe some herbal flavor. Dry finish with more oak and underripe stone fruit. Mouthfeel is a bit smoother than expected. Carbonation is somewhat low, which is not a complaint. Otherwise, it's light on the palate with a little pucker. Good stuff. I love small, subtle saisons and sours, so this is right up my alley. If the flavor didn't wash out a touch in the taste, I'd have nothing to really criticize. Very solid "regular" lineup beer.

On tap at Belmont Station. Reviewed from notes.

A: Cloudy straw color with a 1/8" white head, though it's more bubbles than head after a few minutes.

N: Lactic acid is the first thing to jump out at me. Oak and lemon zest. Straw, lavender, and coriander. Black peppercorn and some brettanomyces.

T: Lightly sour with a touch of bitterness. Slightly bitter and there's a good biscuity nature. Grapefruit is here and lots of oak. Acidic stomach acid quality detracts for me.

M: Lighter in body, though slightly slick on the palate. Dries out the tongue.

O: An enjoyable saison for sure, but I wish it didn't have the unpleasant aftershock.

3.75 A: Mildly hazed peach color. Two fingers of frothy white head. Retention is about average and about one finger of irregular lacing is left.

4.25 S: Big, bold nose on this. Really funky with all the barnyard aromas. Also musty basement, dry dusty wood, and some herbal notes. Lemongrass and apple. Dry with a grassy floweriness. Oak.

2.75 T: The taste isn't nearly as good as the nose. First off, there's a fairly strong tannic presence. Second, it's much less funky and more tangy and tart. This isn't necessarily a bad thing, but it doesn't work that well in this one. Tart apple, oak, sharp tanginess. There's still some of the funk mentioned above, but not a whole lot. Woody with astringency.

2.75 D: This would have been a lot better if it stayed out of the oak barrel. It picked up all the bad stuff in it.