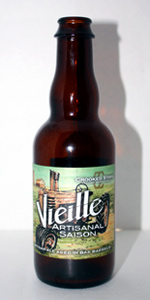 Translated from French as “old-tradition”, Vieille is our barrel-aged classical saison. Using time-honored techniques, our saisons employ traditional methods to restore complexity and the rustic character lost in modern day saison. Saisons were the original wild ales, brewed for the farmhands to be a refreshing and sustaining beverage. Each batch of Vieille takes on a soft Brettanomyces character and a complex acidity while conditioning in our large oak foeders. After conditioning in oak, we lightly dry hop the beer to finish it, lending a subtle citrusy hop aroma. Leading with lemon and lime citrusy hop notes, a subtle herbal spice, and a crisp tart finish, Vieille’s character epitomizes artisan saison.

The Saison looks the part as its hazy straw character projects a weighted appearance that the taste and texture proves otherwise. Its medium haze diffuses its glow as its head billows the rim of the snifter. Retaining sturdily, the beer's lace swirls with broken rings. All in all, this is a well-sold Saison to the eye.

Aromatically, the beer sings with a plethora of wood aged earthiness! Starting with the tart scent of lemons and lime, the nose tilts toward sea air, musty attic-like aged woods, and a strong gamey, near-mushroom character that aids to its charm. Quite acidic, the notes of oddly placed sun-dried tomatoes give a vegetal tone to the scent, even as a strong pepper and almost-plastic scent rounds out its complex nose.

For better or worse, the flavor is simplified. Sure, the dried fruit and soft spice taste balances upon a dry cracker-like pilsner base, those sour-ish tastes are moderate and more resemble tartness. Its middle is lightly salty with leathery notes and sawdust. With the slight dried wood type of bitterness, the ale finish modestly citrusy with dried orange peels and an overall woody and citrusy tone- seemingly of sassafras.

The beer further recedes as the textures fall from full-on champagne to light and watery in an instant. Though this fuels its highly drinkable character, its earthen and complex aromas promise me a sharp and acidic after-palate that just doesn't develop. Its fleeting finish is watery and minerally- and a little alka-seltzer-like.

This beer could easily be an oude gueuze. It has so many components to it that it departs from a regular saison and definitively is a wild ale.

Not much head. Pours a very nice and dark color, reddish color. Smells funky. Taste is incredible. Different strands of beers are tasted. Everything resolves in a nice sour finish, but the taste is very much like the one from an oude gueuze with its three different lambics.

A. This one is a bit darker than the Surette, a kind of yellow/orange color, totally cloudy, I can't see any bubbles and there is a limited foamy white head that leaves a bit of lacing behind.

S. Has a nice grassy and celery scent to it.

T/M. This is a bit plain. It is very smooth and light to medium bodied. Some carbonation and a mild tingle on the tongue. There is a mild grape malt taste and a hint of hoppy bite. A very mild diacetyl sourness.

O. It's good, but in a plain way, if that makes any sense. Definitely not worth the price tag (in NYC, $13 for a 12.7 ounce bottle), but if you can find it for a more reasonable price it's definitely a nice sitting-outside kind of beer.

Poured from tap into tulip at hops and pie denver. Great straw golden color and nice murky color. Straw funky and fruity aromas...something I can't place.
Taste is crisp straw malt with a dose of funky barnyard. Nicely dry and fruity. Quite an awesome saison. The way I imagine a saison would have been in old belgium.

Mouth is lighter bod but crisp and feels a bit thin, nice carb.

Overall pretty nice, good saison bit seems to be missing much of the funk.