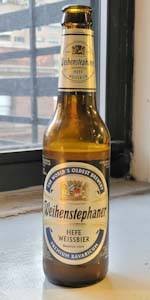 Notes: Our golden-yellow wheat beer, with its fine-poured white foam, smells of cloves and impresses consumers with its refreshing banana flavour. It is full bodied and with a smooth yeast taste. To be enjoyed at any time,goes excellently with fish and seafood, with spicy cheese and especially with the traditional Bavarian veal sausage. Brewed according to our centuries-old brewing tradition on the Weihenstephan hill.
View: More Beers | Place Reviews
Recent ratings and reviews. | Log in to view more ratings + sorting options.
Ratings by bros:
None found.

The body pours an orange gold with a nice fluffy head. Good retention and lacing. A handsome beer especially in the right glassware.

Nose is the banana-bubble gum aroma for which the style is famous. Hit-or-miss for some folks, but a big hit for me. Add the familiar clove and I was a happy guy.

Taste substantially follows nose with the clove stepping up a bit. A bit sweet but a modest hop flavor is present helping balance the beer.

Good carbonation and mouthfeel make it an easy drinker.


Look:
Cloudy and opaque golden yellow. I can see the shadows of my fingers through the glass when I hold it up to a light. 3-finger pillowy and creamy off-white head slowly dissolves to a 1-finger consistent and creamy cover. When I opened the beer, it slowly started pushing up out of its bottle. Some yeast looks to have remained on the bottom of the bottle, indicating that this sample will not be as opaque as 'normal'.

Smell:
All kinds of banana along with some sweet fruit that has been lightly sugared. Balancing this is a nice clove note. Wonderful nose.

Taste:
Similar to the nose but with the addition of wheat notes that come across as very slightly bready or perhaps doughy. There is also a mineral note. Everything is very nicely balanced. The finish is lightly sweet and clovey.

Feel:
Smooth, soft, and creamy. The body is not quite medium.

Overall:
A great Hefeweizen from a top-notch brewery. Quaffable, balanced, and refreshing. This is the benchmark for the style and has been so for decades. One of my favorite Hefeweizens, along with those from Andechs, Ayinger, and Schneider.

Strong flavors of banana and cloves. Wheat lingers at all times.

An exemplary take on the style; I'd have another! And another!

On the pour a 1.5 finger fine head just over the glass that slowly receded and became rocky and creamy looking. Color is a dark gold with standard hefe haze. Carbonation is light enough that it's hard to see through the haze. Some lacing forms if you drink it fast enough but not the best lacing ever.

Aroma is full of banana esters and a bit of acetaldehyde but not anymore than is expected of the style. Aroma is relatively light and not a lot of the malts come through this is all yeast on the nose.

Flavor is similar to the aroma with a certain lightness to it followed by a nice hit of traditional hefe flavors, once again a little tarter than I'd prefer, but nothing overwhelming or out of character for the style. There is a definite minerality to the flavorfollowed by some light bitterness and grassiness from a light dose of noble hops. Followed up by all that a sweet wheat maltiness does creep in making for a nice finish with a bit of sweetness after yeasty slightly bitter flavors.

The feel is once again a bit light and astringent, but the head retention on this makes for a relatively balanced light feeling making it not watery. The finish is relatively long for how light it is and in the chest you can feel the alcohol warming sensation a little bit.

Overall this is a good example of a traditional hefeweisen and a bit drier than the hofbrau hefe but without the citrus notes of an americanized hefe or traditional American wheat.

Rated by Acandage from California

Reviewed by sodavisions from Michigan

5/5  rDev +13.4%
look: 5 | smell: 5 | taste: 5 | feel: 5 | overall: 5
LOOK: Golden orange/yellow, semi-hazy, two fingers of very fine foam.
SMELL: little bit of clove and hops, lots of banana.
TASTE: exactly like it smells in a snifter. Directly from the bottle, it’s 100% banana.
FEEL: very smooth and refreshing with medium body and medium-light carbonation.
OVERALL: This is, to me, a perfect beer. It’s insane. It’s refreshing with just enough body to it to be rewarding without feeling bloated afterwards. The tastes are lovely and perfectly balanced, and there’s a variation in flavors between the glass and the bottle that are both wonderful in their own way. The best part about it is that it’s not even expensive, either. It’s like $11 for a 6pk at my local liquor store. That’s only $2 more than a 6pk of Heineken for THIS.

4.59/5  rDev +4.1%
look: 4.25 | smell: 4.5 | taste: 4.75 | feel: 4.5 | overall: 4.5
Poured golden amber, not transparent but not cloudy either. Unfiltered?
The head was nearly white and fleeting but that may be due to the age of the beer.
The aroma was mostly cloves and, oddly, banana. At least the impression of banana.
The taste, wow. Cloves are prominent but not overwhelming, banana is more an essence than flavor, and the malts are balanced, tasty and rewarding. So good, I think I need more of this one for the summer.
The feel was smooth as the carbonation was slow and sparse, but present. Didn’t detract from the experience at all.
Not sure why I waited so long to try this, it’s really good!

Reviewed by nizzle8287 from Texas

5/5  rDev +13.4%
look: 5 | smell: 5 | taste: 5 | feel: 5 | overall: 5
Wow. Poured at ~43 degrees F into a pint glass. Cloudy golden nectar with very fine bubbles in the finger of head that reduces to a film and a ring around the glass. If there was a banana Wheaties, this could be the mascot. Smell is, of course, banana, clove, nutmeg, as is taste, but more importantly, this beer does not include any of the previously stated foods as actual ingredients. This beer is brewed under the Purity Law of 1516, meaning it uses only malt, hops, water, and yeast. This philosophy of brewing has led to a masterpiece that lingers on the palette like you've just had a bowl of Cream of Wheat. Mouth feel is velvety creaminess; CO2 level perfectly present and fulfilling. Alcohol is hardly noticeable. Very smooth going down with a a slightly less than medium mouthfeel. Super easy drinker even on a hot Texas day. Easily the best wheat brew I've ever tried.
May 26, 2022

Rated by Bryan-K from Pennsylvania

Reviewed by Foyle from North Carolina

Strong bubblegum aroma hits me first, followed by banana. Gentle spices, of which clove is the most noticeable. Wheaty and gentle yeast ester smell, maybe the palest or grassy funk.

Of all the hefe’s, I have always found Weihenstephaner to be strongest on the bubblegum and banana, which it does not disappoint on the palate here. Of the sweet malt it is crackery like wheat dominated, rather than the doughy malt of Belgians. Great cereal grain taste on the finish. Cloves and mild white peppery like spices wane in and out. A bit of mint was apparent as well.

Light-medium bodied, medium carbonation of the effervescent kind, tight small bubbles create a mild prickliness on the top of your tongue and a semi foamy sip. A gentle finish, not dry nor wet, which leaves an essence of banana bread and grains on the tongue.

Two things here: firstly, I don’t think my bottle was the freshest. I am going to revisit this review down the line and do a side by side comparison. Secondly, Weihenstephaner is and always will be the first beer that got me into drinking good beer, foreign beer, and craft. Once I had it, I never looked back. It was not my gold standard for Hefeweizens, but beer in general. As stated, I have my own Weihenstephaner glass I drink all my wheat beers out of.

That said… I think in the years that have passed, I can’t really rank it as a 98 like it is on BA. It’s legendary with a strong backing, but in modern times I’ve had too many wheat beers that were so complex and just as good, I think the beer coasts just a little off of its legendary reputation. Keeping in mind, I do believe the beer is the standard bearer/gold standard of the style. It’s the absolute most classic, straight up example of the excellency of wheat beers. For most of its existence it might as well have been Zeus compared to all other beers. In modern times, however, many others have climbed Mt Olympus and taken their place beside it. I say all this despite unending nostalgia for the beer and being it’s biggest lover for well over a decade and a half. This is still a phenomenal beer, best of the old guard. I look forward to revisiting the review with the freshest bottle I can find!

4.69/5  rDev +6.3%
look: 4.75 | smell: 4.5 | taste: 4.75 | feel: 4.75 | overall: 4.75
Look: Rich cloudy orange with a humungous and silky-looking off-white head that balloons and settles around the edge, leaving a dome that refuses to settle, though eventually does, and leaves great lacing behind
Aroma: Clove, freshly baked wheat bread, yeast, banana esters, and wafts of bubblegum
Taste: Huge wheat malt and wheat bread jump out and start to quickly develop depth as some clove and banana notes trail just behind. Yeast and bubblegum appear frequently throughout but don’t detract from the wheat/banana/clove but supplement them well and closes with wheat bread
Mouthfeel: Full, silky smooth, soft throughout, medium-high carbonation, and a smooth and soft finish
Overall: This is so damn good and hands down the G.O.A.T. of Hefe Weissbiers in my opinion – the standard amongst which all others are compared to. Not only are the flavors and aromas all on point, but they come together to create a sum greater than its parts and literally flawless in execution. I wouldn’t expect anything different from these folks given their experience and longevity and glad to have easy access to it. Highly recommended

Reviewed by Kulikov from Pennsylvania

S: cloves, maybe a hint of mint that could be in my head. Nothing too complex.

O: incredible easy drinking, outstanding quality. It may not be contemplative, but it's fantastic to enjoy on its own. Treat it almost like a milkshake.

5/5  rDev +13.4%
look: 5 | smell: 5 | taste: 5 | feel: 5 | overall: 5
Yep one of my favorites. Nice copper hazy color with yeast sediment and a thick creamy head. Smells like banana, clove, and other spices. Has a white sourdough bread like smell as well. Taste goes along with the smell. Nice and bready on the order of banana spiced sourdough bread. It is refreshing and I tend to like it very cold. The mouthfeel is on the medium side. Light but creamy. Goes down like milk. Solid hefeweizen!
Mar 16, 2022
Weihenstephaner Hefeweissbier from Bayerische Staatsbrauerei Weihenstephan
Beer rating: 98 out of 100 with 9107 ratings